Who knew that Jon Stewart was such a huge Blue Jays fan? Well, maybe Jon Stewart himself wasn’t an admirer of the back to back ’92-’93 World Series Champions, but at least his character was.

For this week’s Flashback Friday, we take a trip back to 1999 and a couple references to the Toronto Blue Jays on the silver screen in the movie “Big Daddy”.

Most of you probably know of Jon Stewart’s character Kevin Gerrity’s moment of clarity at the end of the movie where he suddenly recalls his evening of sexual escapades that lead to conceiving a child:

“6 years ago … Joe Carter. Toronto and the Phillies, you know … World Series! Mitch Williams … we flew up for the night! There was a girl. I’m an idiot. I was so hammered – chicken wings and Molson 3.0. You know Canadian beer’s like moonshine.”

However, that only scratched surface of the Blue Jays mentions and appearances in the movie. If you look carefully, Joe Carter made a cameo in Big Daddy … sort of.

This is a screencap of the scene where Julian wets the bed and don’t ask me how or why, but somehow I noticed there was some Blue Jays paraphernalia on the wall in the room.

There’s this identical picture of Joe Carter from the 1993 World Series, and a classic foam Blue Jays head. But then after brightening up the photo, I noticed the fabled foam letter “J” on the wall to the left.

When you think about it, the continuity featuring the Blue Jays in this movie is pretty incredible. These Blue Jays souvenirs were in the room of Sonny’s roommate Kevin Gerrity, who we discover at the end of the film was the biological father of Julian, and in attendance for the 1993 World Series.

Do you think it’s possible they were portraying Jon Stewart’s character as a Blue Jays fan? It certainly seems like it.

The Toronto Blue Jays don’t get mentioned all that often on the silver screen, but when they do … you can rest assured that borderline obsessive baseball nerds like myself will notice.

Ian Hunter
Ian has been writing about the Toronto Blue Jays since 2007. He enjoyed the tail-end of the Roy Halladay era and vividly remembers the Alex Rodriguez "mine" incident. He'll also retell the story of Game 5 of the 2015 ALDS to his kids for the next 20 years.
Tags : 1993 World Series     Flashback Friday     Joe Carter 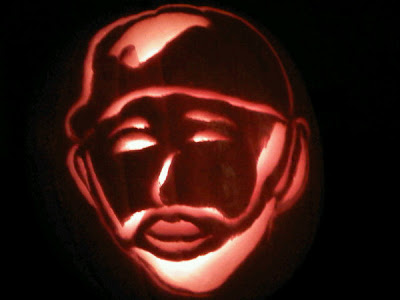