Whenever they’re in the Big Apple, many Toronto Blue Jays players often swing by the MLB Network studios to chat on MLB Central. This week was no different, as Josh Donaldson stopped by Studio 21 and talked to the MLB Central crew about a wide range of topics.

Josh Donaldson started off with Mark DeRosa, and the Bringer of Rain broke down the entire process of his swing; included the Donaldson-patented leg kick. It’s a fascinating segment which is worth at least one watch … if not more.

Donaldson and DeRosa take a deep dive into what makes JD’s swing so powerful with a complete step-by-step breakdown. One thing that I never noticed before … Donaldson swings with his front foot open.

Then JD sat down with the MLB Central panel to further discuss the Blue Jays and their season thus far. The best part is probably when Josh Donaldson starts talking about his affinity for John Gibbons and even did his best Gibby impression.

Of course, this was the famous signal from John Gibbons which Josh Donaldson was referring to – the ol’ “abidextrious reliever” call to the bullpen.

Gibby calls for the lefty-righty out of the pen. pic.twitter.com/zOS1nFilam

Lastly, Josh Donaldson had a rapid fire question segment with Lauren Shehadi, and the most important thing of all that was revealed? Donaldson’s favourite snack is Little Debbie Zebra Cakes. 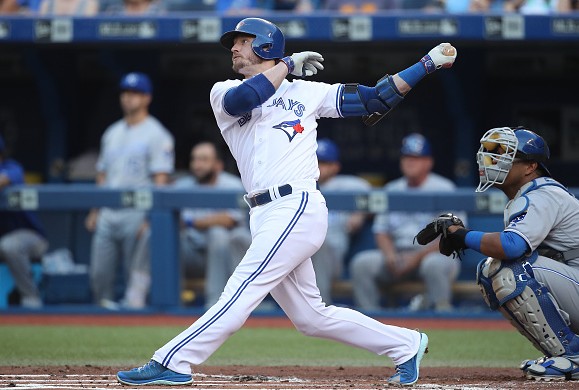