All these years later, that’s probably the best way to describe the Blue Jays pseudo-throwback rebrand. It may be hard to believe, but today marks the 5th anniversary of the Toronto Blue Jays brand new uniforms and logo.

On the morning of November 18th 2011, the Blue Jays invited the media down to the Rogers Centre as the brand new “Blue Jay” was revealed to much hype and fanfare. This was the official reveal video which kicked off the whole ceremony.

The primary logo paid homage to the original from 1977, with a few tweaks in terms of colours and design. Overall, re-imagined retro Blue Jays logo and uniforms were met with universal approval.

Most notably, after seven years of wearing uniforms adorned with black and teal, the Blue Jays finally put the “blue” back in “Blue Jays”. Not only in terms of colour, but the word “blue” was emblazoned on the uniforms once again after seven years of being referred to as simply the “Jays”.

To me, it really doesn’t feel like it’s been five years since the new logo reveal. I think that’s a testament to the sharp design of the latest Blue Jays logo and uniform; that they don’t already look dated after half a decade.

The fact that the Toronto Blue Jays are a competitive team once again bodes well for the new uniforms. It’s already given fans plenty of new warm and fuzzy memories, and the logo and uniforms suddenly connect the glory days era with the newest era – a Blue Jays team which has made two consecutive trips to the ALCS.

Chris Creamer’s SportsLogos.net is the preeminent site for logos and uniforms, and he recalls the initial overwhelming positive response to the Toronto Blue Jays new look:

“When the logo was originally unveiled, I’ve never seen such near-universal praise for a rebrand. It’s still something talked about as one of the better examples of a team not only reaching back to their past, but possibly even improving upon it.

The market was begging for a return to the look of the glory days and everyone involved in its creation delivered in ways we couldn’t have imagined.”

Not surprisingly, the new Toronto Blue Jays logo is still rated as the top MLB logo on Chris’ site and one of the highest rated professional sports logos in the world.

To really appreciate the latest iteration of the Blue Jays logo and uniforms, you have to take a glimpse back its predecessor. As you might remember, the previous “angry bird” uniforms which looked dated shortly after their implementation in 2004.

Soon after the new logo and uniforms were released in 2011, Alex Anthopoulos let it be known how much he and President Paul Beeston despised the old ones.

The uniforms may not have changed over the past five years, but the franchise itself has seen many players come and go. Just watching the reveal video itself underscored how many players have come and gone from the Blue Jays roster since 2011.

Back then, Jose Bautista, Adam Lind, Ricky Romero, Yunel Escobar, J.P. Arencibia, Brett Lawrie and Brandon Morrow were all on hand to model the new uniforms as the “faces of the franchise”.

In late September of 2011, Uni Watch was one of the first outlets to leak and confirm the re-imagined Blue Jays logo and that the Blue Jays would indeed be receiving a new uniform set. It was merely the primary logo with a generic font, but it was a marked improvement over what the Blue Jays were wearing at the time.

Upon the full reveal on November 18th 2011, the new royal blue colour and split-letter typeface was shown for the first time. That initial leak was merely a glimpse into the changes, but the full reveal provided a much more complete look at the new set.

As far as rebrandings go, it was executed with precision and set the tone for other “throwback” rebrands which were adopted by teams like the Houston Astros. Most recently, it even crossed over into other sports with the Toronto Maple Leafs. They took a page out of the Blue Jays’ rebrand by opting to salute the past by revamping the Leafs logo and uniforms with a retro look.

The Blue Jays perfected the now-famous “Star Wars: Force Awakens” formula of a soft reboot; paying homage and honouring the source material of the previous iteration, while using that source material to create a new identity.

Back in late 2011, the timing of the Blue Jays rebrand couldn’t have been better. It came at a period when the team suffered from a poor on-field product and attendance was lacking. Sadly, those new uniforms were the biggest offseason acquisition the Blue Jays made that winter.

Whenever teams put out a new logo or uniform, I always joke that it’s merely a way for clubs to detract fans from the subpar on-field product, and in many ways, that was true of the Blue Jays approaching the 2012 season.

The team had just wrapped up their fifth consecutive fourth place finish in the division and needed some semblance of positive exposure … even if that meant looking good rather than playing good. Overall, the rebrand garnered a lot of interest and media attention.

Overall, there are some things I might tweak about the “new” Blue Jays logo; the lack of a cap with a letter in lieu of the bird might be something worth looking into down the line. I asked Chris Creamer what he might change in the future, and he suggested perhaps losing the serif on the new typeface.

Overall, these are just small changes, and nothing needs to be drastically overhauled any time soon. Honestly, these Blue Jays uniforms could remain unchanged for another five years and people wouldn’t notice.

Adopting a new, brilliant blue as the primary colour was probably the best choice they made in terms of the entire rebrand. It’s much more eye-catching than the previous blue uniform which came into existence in cap form in 1989.

Five years later, the Toronto Blue Jays’ new logo and uniforms don’t look like they’ve aged a bit; a hallmark of a truly ingenious design and a hybrid of the old and new.

Ian Hunter
Ian has been writing about the Toronto Blue Jays since 2007. He enjoyed the tail-end of the Roy Halladay era and vividly remembers the Alex Rodriguez "mine" incident. He'll also retell the story of Game 5 of the 2015 ALDS to his kids for the next 20 years.
Tags : Blue Jays logo     logos     uniforms 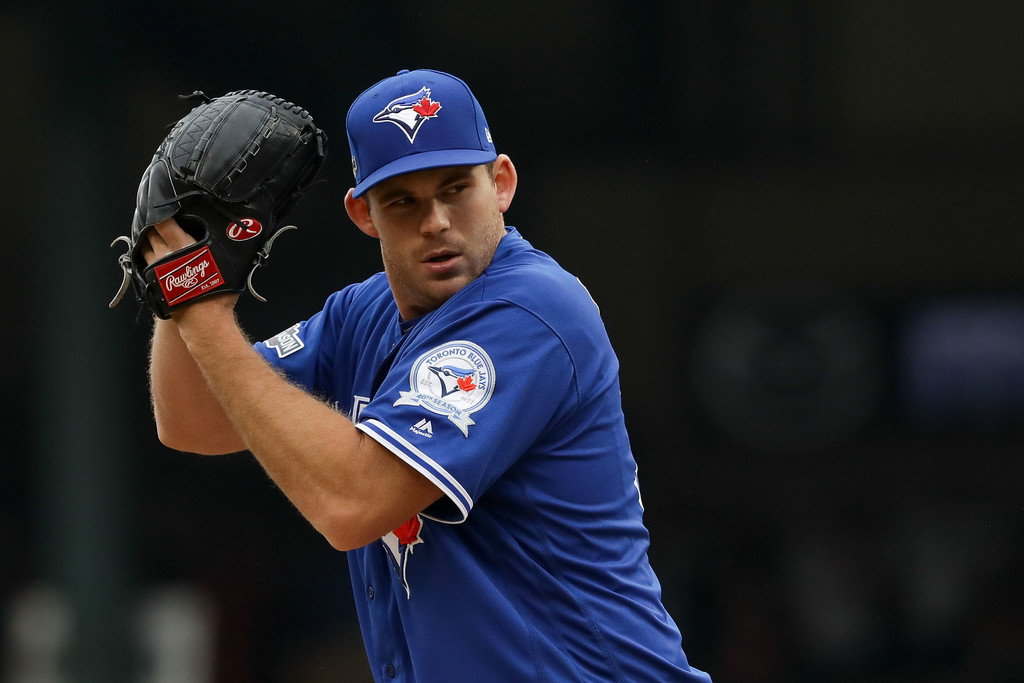 Was Joe Biagini in the Tonight Show Audience? 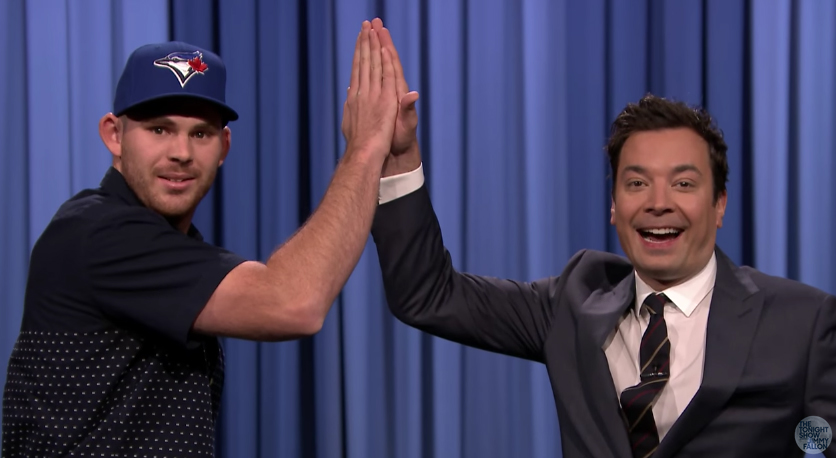