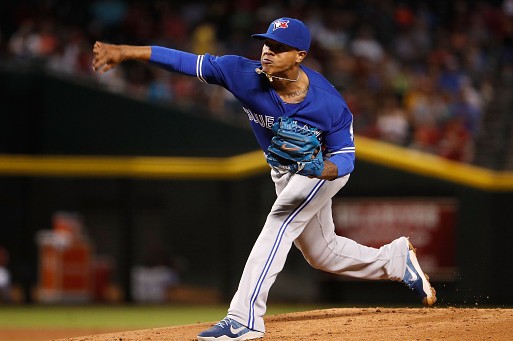 There’s something different about Marcus Stroman these days. Not just his demeanor on the mound, but his overall performance. After struggling for months, something finally clicked with Stroman and he’s beginning to look like his old self again.

During a seven-game stretch from mid-May to mid-June, Marcus Stroman pitched to an ERA of 7.99 and allowed 60 hits over the course of 40 innings. Stroman was hit often and he was hit hard.

But things are looking up for Marcus. In his past five starts dating back to June 26th, Marcus Stroman’s ERA is only 3.90 and he’s averaging just over six hits per game.

So why the sudden turnaround? It looks like a few subtle changes to Marcus Stroman’s delivery have made all the difference. It may not seem like much, but Stroman has made a few small alterations to his windup and delivery.

The first which is his very first step. Earlier in the season (the left side of the GIF), there were many working parts to his first step. If you watch his right foot, he pivots twice before coming to home plate. In Stroman’s new delivery, his right foot doesn’t pivot at all.

Whereas most recently, Stroman is simply rocking back onto his left leg and driving towards home plate. This is a trick Marcus Stroman apparently picked up from David Price; simply stepping backwards on his plant foot to initiate delivery.

With much less working parts, this allows Marcus Stroman to be much more consistent in his delivery. Shi Davidi spoke to Pete Walker about how these slight alterations have helped Marcus Stroman turn the corner:

“Anytime you have a lot of movement in your delivery, there’s always the possibility of getting out of whack, more movement means more moving parts. For him, simplifying the delivery concentrates him on getting his hands out on time, because sometimes when his hands are high, he breaks high and sometimes a little late.

With his height, he has to do everything he can to stay on top of the baseball. By lowering his hands a little bit, simplifying the delivery, minimizing his head movement, getting his hands out on time definitely makes a difference.

It puts him in position to be more consistent.”

In the screencap below, also notice how Stroman is angled much more directly to the third base side in this sequence than home plate. Again, it’s a very subtle change, but his body begins nearly perpendicular to home plate in his new delivery.

The other highly noticeable change in Marcus Stroman’s delivery is his hand position.

Earlier in the season, Stroman’s glove was all the way up to his head at this point in his delivery. In recent weeks, he’s moved his hands down to waist-level, so they’re belt-high instead of up by his head.

Lastly, there’s a subtle difference in the before and after of Marcus Stroman’s release point.

It’s a little difficult to tell in this particular screencap, but not only is Marcus Stroman’s new release point slightly higher, it’s also a little closer to his body.

I don’t claim to know exactly how or why these changes are benefiting Marcus Stroman, but they simply are. A much more compact windup and delivery is the simple explanation.

In this case, we don’t exactly need to know the particulars, just that Marcus Stroman has made an adjustment, and the results are promising thus far.

The Blue Jays Can’t Afford to Lose Another Starting Pitcher

Marcus Stroman Mixes His Timing to Hitters at the WBC