More GIFS from the Blue Jays-Rangers Brawl in Arlington

The morning after a bar fight is always a tough one to piece together. There’s the matter of trying to find out what happened, how it started, who got hurt and who jumped into the middle of the scrum.

The very same goes for the Blue Jays-Rangers brawl from yesterday in Arlington. The action was fast and furious, and it’s only after multiple viewings that one begins to pick up on things and notice further intricacies from the fight.

Below are just some of the highlights from the fight in GIF form (that wasn’t Rougned Odor swinging away at Jose Bautista, or Adrian Beltre holding Jose Bautista back).

Josh Donaldson came to the aid of his teammate, and much like a viking himself, JD leapt into battle. Notice how Odor tried to connect, but missed … and Donaldson instead took down several Rangers.

Lost in the fracas, Jason Phillips (one of the Blue Jays bullpen catchers) tagged Sam Dyson, and Dyson subsequently suffered a cut to the face.

It's hard to tell, but somebody on the Jays training staff clipped Sam Dyson. pic.twitter.com/6IWrjzo4Mf

After the fact, John Gibbons bolted out of the clubhouse in support of his team (even though he had long since been ejected) and provided a bit of moral support to Jose Bautista.

I got your back, Jose. pic.twitter.com/SnUFLSzYc0

And this footage was caught by the Rangers broadcast cameras, but John Gibbons and Jeff Bannister were seen jawing back and forth after the fact.

Gibby & Jeff Bannister jawing back and forth. pic.twitter.com/26Po4mHlHp

And as a bonus GIF, I decided to edit Rougned Odor’s play from Game 5 of the ALDS with yesterday’s incident with Jose Bautista.

Odor was finally able get a glove on something. pic.twitter.com/bONNPcdG3F

Ian Hunter
Ian has been writing about the Toronto Blue Jays since 2007. He enjoyed the tail-end of the Roy Halladay era and vividly remembers the Alex Rodriguez "mine" incident. He'll also retell the story of Game 5 of the 2015 ALDS to his kids for the next 20 years.
Tags : basebrawls     GIFs     Texas Rangers 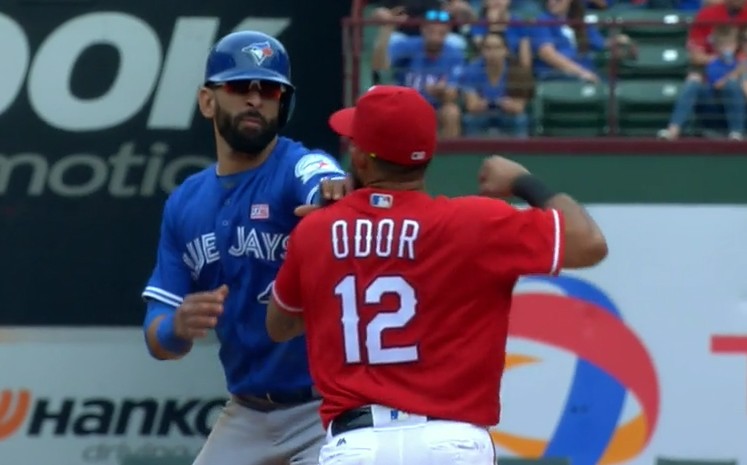 The Blue Jays and Rangers Engaged in All-Out War