The Blue Jays and Rangers Engaged in All-Out War

Baseball is not supposed to be a contact sport … or at least, very minimal contact. The Blue Jays and Rangers did not get that memo.

It escalated into all-out war in Arlington between the Blue Jays and Rangers as some bad blood had apparently spilled over after months of harboured anger between the two clubs.

It’s odd, because both teams squared off in a four-game set last week with relatively no issues whatsoever. Everyone thought Jose Bautista was going to receive retribution for the bat flip, but nothing happened. Everything appeared to be okay between Texas and Toronto.

And then Sunday happened.

The entire game was a complete and utter mess. Nobody’s really talking about the fact that the Blue Jays’ bullpen let yet another lead slip away, but that fact will only be a footnote to the brawl incited by Rougned Odor and Jose Bautista.

The Blue Jays certainly weren’t entirely innocent in that game; Jose Bautista’s slide into second base would be characterized as a hard slide. But the Rangers came out of that game looking very petty and very vindictive … for something that happened seven months ago.

Rougned Odor is trash, to say the least. Not only did he shove Jose Bautista, but he cold cocked him and then slapped him with his glove before Adrian Beltre could restrain Bautista (and not his teammate Odor, mind you).

Odor was hardly innocent in this matter, and he also has a history of making questionable slides into second base himself. And with the new slide rules in place, Odor has a reputation of hanging around the bag in the hopes of getting the umpires to call interference and getting a double play.

It speaks to Rougned Odor’s character as a player. To his credit, at least he’s consistent; he plays the game dirty all around. It was a cheap move to pull on the baseball diamond and Odor should be handed a lengthy suspension because of it.

Tensions were boiling at that point, and the slide into second was what sent Odor over the edge. Rougned Odor clearly had some pre-existing anger towards Jose Bautista and the Blue Jays and was just waiting for an excuse to blow up.

The way the umpires handled that entire series certainly didn’t help. The accusations of quick pitching and missed balk calls against the Rangers gave the Blue Jays all the ammunition they needed, and the ejections of Tim Lieper and John Gibbons only escalated things.

For Matt Bush to plunk Jose Bautista as the game-tying run was an asinine thing to do, and the warning issued afterward set things in motion to reach their eventual boiling point.

The Rangers were running out of time to seek their retribution, and that’s why they did it so late in the series. Need I remind you, these teams will not face each other again the remainder of the regular season. And if by some magic they meet in the playoffs this year, it will be another all-out war.

From the Blue Jays perspective, I’m really worried about the after-effects from this incident. Jose Bautista won’t be suspended, and if anything, Kevin Pillar and Josh Donaldson will get a few games. Did you see their amazing moves, by the way?

Pillar took on 4 Rangers himself, then Donaldson speared about 4 of them himself. pic.twitter.com/n59rC67dK4

And of course, John Gibbons will be suspended as well for coming back onto the field after being ejected. But that’s not something he’s entirely foreign to either. Gibby did the same thing last year during the Blue Jays-Royals brawl in early July.

But here’s the thing about incidents like this; they really do have a tendency to galvanize a team. Even though the Blue Jays were on the losing end of the game, the camaraderie they showed just might finally ignite the spark they’ve been looking for all season.

In the meantime, the Texas Rangers may have just supplanted the Kansas City Royals and Baltimore Orioles as the Blue Jays’ most-heated rivals. And like most, I can’t wait to see the sequel.

Ian Hunter
Ian has been writing about the Toronto Blue Jays since 2007. He enjoyed the tail-end of the Roy Halladay era and vividly remembers the Alex Rodriguez "mine" incident. He'll also retell the story of Game 5 of the 2015 ALDS to his kids for the next 20 years.
Tags : basebrawl     Jose Bautista     Rougned Odor     Texas Rangers 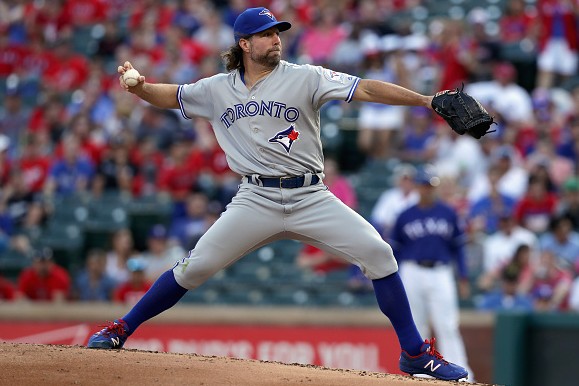 GIFS: The Blue Jays Stay Loose Against the Rangers 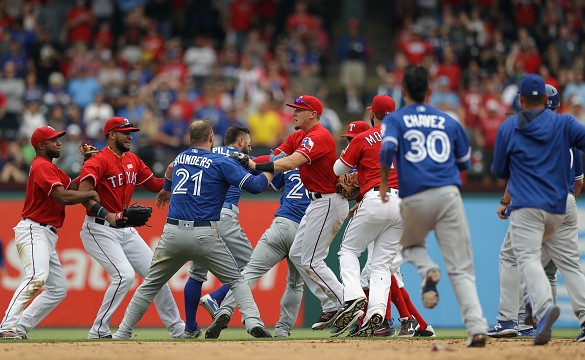 More GIFS from the Blue Jays-Rangers Brawl in Arlington