As the fog from New Year’s Eve is finally beginning to dissipate, it tuns out Dalton Pompey had himself an interesting way of ringing in 2016; by starring in the Royal Canadian Air Farce New Year’s Eve special.

I’ve always had a strange soft spot for the Air Farce NYE special; prior to the traditional New Year’s celebrations, back when I was younger, I always used to watch this with my family. So it was cool to see a Blue Jays player like Pompey make a cameo.

Once Pompey enters the sketch, he has a few decent one-liners, like his explanation on how he was able to steal four bases in the playoffs.

After the jump, check out the video of the Air Farce special from last night. The sketch with Dalton Pompey starts around the 7 minute mark.

Ian Hunter
Ian has been writing about the Toronto Blue Jays since 2007. He enjoyed the tail-end of the Roy Halladay era and vividly remembers the Alex Rodriguez "mine" incident. He'll also retell the story of Game 5 of the 2015 ALDS to his kids for the next 20 years.
Tags : Dalton Pompey     video

The Best Gibby GIFS and Vines of 2015 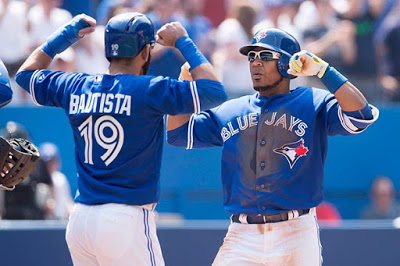 Crasnick: Bautista or Encarnacion Could Land in Boston Next Offseason