Sometimes, the best traditions are born by accident. Such is the case with Edwin Encarnacion and his famous “chicken wing trot”, walking the parrot, T-Rex arm, “Edwing” or whatever you want to call it.

In honour of Edwin Encarnacion’s torrid pace in the month of May, this week’s Flashback Friday takes a look back at the origin of his famous post-home run celebratory parrot walk.

The very first instance of Edwin walking the parrot happened back in 2012 against the Seattle Mariners. In fact, it came to be by complete accident. Encarnacion’s teammate Jose Bautista explained the origin of the parrot walk during his appearance on MLB Network’s Intentional Talk:

“I think the way it got started was one day he hit a line drive, one of those ‘you don’t know if it’s going to go or not’ so he was chugging around first and almost fell down.

He was just kind of leaning and kind of just stayed that way, and everybody was like ‘that looked cool, you need to do that again’.”

Here’s the home run in question – a grand slam off Hisashi Iwakuma on April 28th, 2012.

Because of the camera angles, it’s difficult to tell whether Encarnacion was close to taking a tumble around first base, but it makes sense that he  elevated his right arm to gain some balance as he rounded first base.

In this first instance, it looks like he’s holding up his arm as if he were carrying an old-school boombox.

Over time, it progressed into the home run trot you see today which most famously resembles “walking the parrot”. It’s best experienced in the original GIF seen around the around coined by Mr. Archi Zuber and Scott Johnson of The Score.

Of course, Bob Mackowycz noted that Encarnacion’s parrot walk is the antithesis to one of baseball’s most infamous home run trots, Jeffrey Leonard’s “one flap down”. I guess that would make Encarnacion’s trot “one flap up”.

Ian Hunter
Ian has been writing about the Toronto Blue Jays since 2007. He enjoyed the tail-end of the Roy Halladay era and vividly remembers the Alex Rodriguez "mine" incident. He'll also retell the story of Game 5 of the 2015 ALDS to his kids for the next 20 years.
Tags : Edwin Encarnacion     Flashback Friday 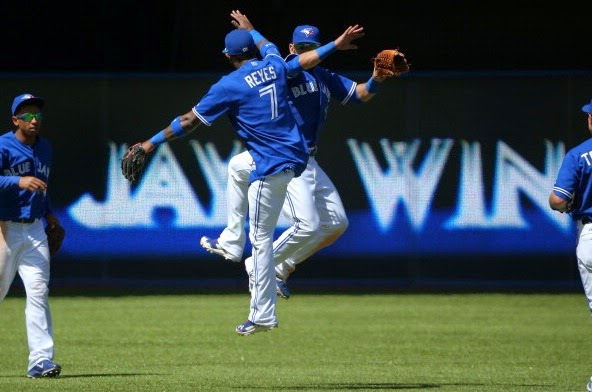 The Plight of the Weary Blue Jays Fan