The Quintessential Blue Jay Is …

Every Toronto Blue Jay that takes the field today has a name and a number on the back of their jersey. While it’s a formality to keep all the players organized, there are some players where you don’t even have to look at their jersey to know they’re a Toronto Blue Jay.

Last week, I asked folks to name their quintessential Toronto Blue Jay player. This is somebody who personifies what it means to play in Toronto, and the instant you think of that player you immediately associate it with the Toronto Blue Jays.

I’d like to thank everybody for taking the time to vote and especially to those folks who included some supporting evidence for their favourite player. I have to say, there were some very convincing arguments out there, but ultimately it came down to number of votes.

Seasons/Games Played as a Blue Jay: 12 seasons, 339 games
Awards: Cy Young Award Winner, 6 Time All-Star
Accolades: Holds franchise record for most wins as a starter in a single season (22 in 2003)

He’s only been gone for eight months, but that doesn’t mean the legend of Roy Halladay won’t live on forever in the city of Toronto. Through 12 seasons with the Blue Jays, Doc showed he was the consummate professional and true leader for this ball club.

Here’s what one voter had to say about Roy Halladay:

“An important factor for me is that he is a homegrown talent. He exemplifies everything it means to be a Blue Jay – class, intensity, dedication and work ethic.

While their are others on this list who have had shining moments in a Blue Jays uniform (ie Joe Carter and Robbie Alomar) their time with the team successful, but short lived.

There are some names on this list that I might feel differently about had I been old enough to really appreciate their contributions to the team’s early years – but for me if there is an entry in the dictionary to define Blue Jay, Halladay’s picture is right there.”

Doc’s commitment to the franchise and to his craft is what made him so likable, and he’s the perfect embodiment of what it meant to be a player that wore the Blue Jays uniform in the modern era.

How can you think of the Toronto Blue Jays without thinking of Tony Fernandez? As a player who logged time during four separate tours with the Blue Jays, Fernandez holds the franchise records in many different categories – notably games played and total hits.

Out of all the candidates, voters were perhaps most passionate about Tony Fernandez. Here are a few quotes from their supporting evidence:

“The beginning of the Tony Fernandez era was the beginning of winning baseball in Toronto. He represents what attracted so many people to the Jays in the first place. He helped this city fall in love with baseball with flair and fun in the field.

His sidearm throw across the diamond was money in the bank every time. Hailing from the Domincan Republic, Fernandez also represents Toronto as a prime example of a place for Latin baseball players to thrive and be celebrated.”

“Who else provides a link between the teams of the 80’s, the World Series years and the wilderness years of the late nineties The fact that Tony seemed to save his best hitting years for his three different tour of duties with the Jays cements him in my mind as the quintessential Blue Jay.”

Plagued by injuries later in his career, Stieb went into pseudo retirement following the 1993 season, but at 40 years old returned to the Blue Jays one more time in the year 2000.

Having come up through the Blue Jays system and debuting with the club just two years after the Blue Jays debuted as a Major League team in 1977, Stieb was there through thick and thin. He was there during the rock bottom years, but he was also there for those incredible highs.

“Stieb was here during the franchise’s humble beginnings. He set the tone for a franchise that has always prided itself on pitching. Stieb was the Blue Jays for a long while. His no-hitter remains an immensely proud moment for the franchise. Most importantly, he was there through the good and bad times.”

Out of all the players who have dawned the Blue Jays logo, perhaps none of them are better than Roberto Alomar.

From the inception of his time in Toronto, Alomar immediately made his presence felt on the team by not only becoming one of the best second baseman in the league, but a threat at the plate as well.

Not even a traditional home run hitter, Alomar will arguably be best remembered for his game tying home run off Dennis Eckersley in Game Three of the 1992 ALCS.

Alomar’s iconic pose standing just outside the batter’s box with both fingers pointed in the air will forever remain as one of the greatest images in this franchise’s history.

Finally, we come to number one. And after many votes, the quintessential Blue Jay is none other than Joe Carter.

Most of us can just close our eyes and envision Carter’s walk-off home run to end the 1993 World Series. It’s one of those “where were you” moments that fans will talk about for decades to come.

Not only did Carter end the 1993 World Series, but he also caught the final out in the 1992 World Series playing first base. In both instances, the images of Joe Carter leaping in excitement are something that will be etched into fan’s memories for a lifetime.

Oddly enough, we wouldn’t even be talking about Joe Carter or Roberto Alomar if not for another Blue Jay on this list – Tony Fernandez. He was included with Fred McGriff in the infamous trade back in on December 5th 1990 to get both Carter and Alomar from the San Diego Padres.

With that trade, Pat Gillick helped shape the Blue Jays into a dynasty by passing the torch from McGriff and Fernandez to Alomar and Carter as the new faces of the franchise.

Joe Carter may not have been statistically the best hitter in Blue Jays history, but he was always at the right place at the right time. And that’s why I’ll always remember Joe Carter as the quintessential Blue Jay.

Ian Hunter
Ian has been writing about the Toronto Blue Jays since 2007. He enjoyed the tail-end of the Roy Halladay era and vividly remembers the Alex Rodriguez "mine" incident. He'll also retell the story of Game 5 of the 2015 ALDS to his kids for the next 20 years.
Tags : Dave Stieb     Joe Carter     Roberto Alomar     Roy Halladay     Tony Fernandez
Previous post

Intangibles, not PED’s the Key to Jose Bautista’s Success 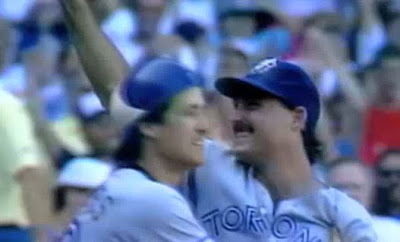