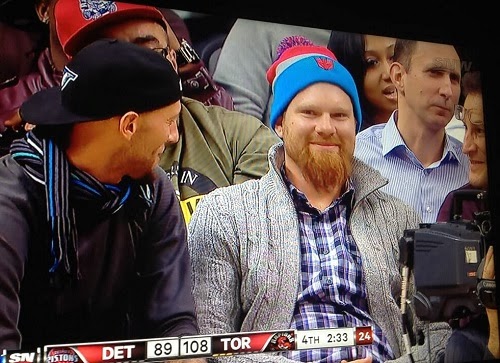 You know it’s been a particularly slow offseason for the Toronto Blue Jays when yours truly is devoting a blog post to this, but here goes …

Ahead of the Blue Jays Winter Tour kickoff today, Adam Lind made an appearance sitting courtside at the Toronto Raptors game last night. Under ordinary circumstances, that probably wouldn’t be all that newsworthy, but there’s multiple layers to this one.

First off, Adam Lind’s beard. Earlier today, I mistakenly described it as “flawless”, but your girl @mererog corrected me, and on second thought it resembles something a little more “rustic” and it’s very Boston Red Sox-esque.

Also, Lind’s outfit choices are quite fitting for a man who’s set to travel across Ontario. Bonus points for sporting what appears to be a Calvin Johnson Megatron toque (thanks @meechone).

Here’s where the plot thickens; Adam Lind was at the game with former Blue Jays teammate Jesse Carlson. Many will remember Carlson for the famous brawl with Jorge Posada at Yankee Stadium.

One wonders whether Jesse Carlson might be living in Toronto, as he hasn’t played in the Majors since 2010. Carlson had a brief stint with the Boston Red Sox AA affiliate, the Portland Sea Dogs in 2012.

Oddly enough, Jesse Carlson is wearing the cap of his alma mater club, the Toronto Blue Jays. Frankly, I don’t think I’ve ever seen a baseball player wear the cap of their current or former team out in public.

And lastly, to the right of Lind and Carlson is none other a recent recipient of the Order of Canada, TVO’s Steve Paikin. Although, he openly admits he was sporting gear adorned by the Toronto Blue Jays division rivals.

Adam Lind, Jesse Carlson, and Steve Paikin … that’s a motley crew if I’ve ever seen one.

Hearty tip of the cap to @mikerheostatics for the image.