West Coast baseball is always weird for the Blue Jays. Whenever the clock strikes 12:00am in the Eastern time zone and the Jays are on the road, strange things start to happen.

Like any well-intentioned Blue Jays fan, I settled in on Friday night for some late night baseball with the aim of watching the entire game. I lasted about 90 minutes before falling asleep. But luckily, I awoke a few hours later to see the game was tied and in extra innings.

Dazed and confused, I intended to see the rest of the game to the very end. Here’s my recollection of the evening/morning.

10:00pm – Getting ready to settle in for the Jays game accompanied by a beer, some Sour Patch Kids and Doritos; my equivalent of a charcuterie board

10:04pm – I feel like I’ve already inhaled half of this bag of chips already. The game hasn’t even started yet.

10:15pm – Jose Bautista strikes out trying to check his swing. This is going to be a long night.

10:40pm – Tulo gets a single, but it’s erased by a ground ball double play off the bat of Russell Martin. It’s happening again. The Blue Jays can’t score.

10:49pm – Latos gets out of the second despite a wild pitch.

10:53pm – Chris Coghlan and Ryan Goins with consecutive walks. What alternate universe am I in?

10:55pm – Kevin Pillar bunts. That brings me back to reality.

10:58pm – The Jays manufacture two runs. Considering how few they’ve scored over the last few weeks, this feels like a 10-0 lead.

11:24pm – Pujols hits a three-run double and the Angels go ahead 3-2. There’s the Mat Latos we all remember.

11:28pm – My brain, having sensed impending doom and wanting to avoid further heartache, has put me to sleep.

2:29am – I’m pretty sure I was just woken up by Buck Martinez yelling “GET UP BALL, GET UP” after Kevin Pillar hits one deep to left-centre field. Despite Buck’s home run-sounding call, the ball lands in safely in Cameron Maybin’s glove.

2:40am – Ryan Tepera is in this game? Why does it seem like he always gets the multi-inning relief stints on the road? Tepera somehow strikes out Mike Trout. Maybe the Baseball Gods like Toronto after all.

2:55am – Martin singles and then promptly gets thrown out on a horrible stolen base attempt. This game may never end.

2:56am – Blue Jays PR says Tulowitzki left the game with hamstring tightness. For the time being, my brain is choosing not to process that information.

3:10am – Another inning of scoreless relief from Tepera. This is good.

3:11am – Pillar gets his first hit of the night/morning to make it nine consecutive games with a hit. The Blue Jays finally have something cooking.

3:13am – Bautista comes to the plate with runners on second and third with two out. I feel like this is going to go one of two ways.

3:21am – “Aaron Loup comes in for the save”. See, I told you West Coast Jays baseball was weird.

3:28am – A Smoak error followed by a Martin passed ball followed by a Loup walk. Oh, this is starting to feel strangely familiar.

3:31am – Ball hit sharply to Coghlan, but he can’t come up with it. Bases loaded for Cliff Pennington. John Gibbons wisely goes to Joe Biagini to save us from Loup. The bases are loaded for the Angels with nobody out.

3:35am – Biagini strikes out Cliff Pennington. Damn, Biagini is good.

3:36am – Cole Calhoun singles in a run and the Blue Jays’ lead cut to 8-6 and Mike Trout is coming up with the bases loaded. Angels, if you’re going to do this, just end it now and let us all go to sleep.

3:40am – Biagini hits Trout, which probably isn’t a bad strategy (if that was in fact his plan). It’s now 8-7, one out with Pujols comes up.

3:42am – Biagini with mastery to strike out Pujols. Not only that, but the ability of Martin to corral this pitch probably saves the game for the Jays.

The movement on that Biagini pitch to Pujols = crazy. pic.twitter.com/YqngFiVIRk

3:45am – C.J. Cron comes up, hits a line drive to centre field. I assume the worst and that the game is over, but Pillar catches it. Blue Jays win.

Ian Hunter
Ian has been writing about the Toronto Blue Jays since 2007. He enjoyed the tail-end of the Roy Halladay era and vividly remembers the Alex Rodriguez "mine" incident. He'll also retell the story of Game 5 of the 2015 ALDS to his kids for the next 20 years.
Tags : Blue Jays     Game Recap     Los Angeles Angels 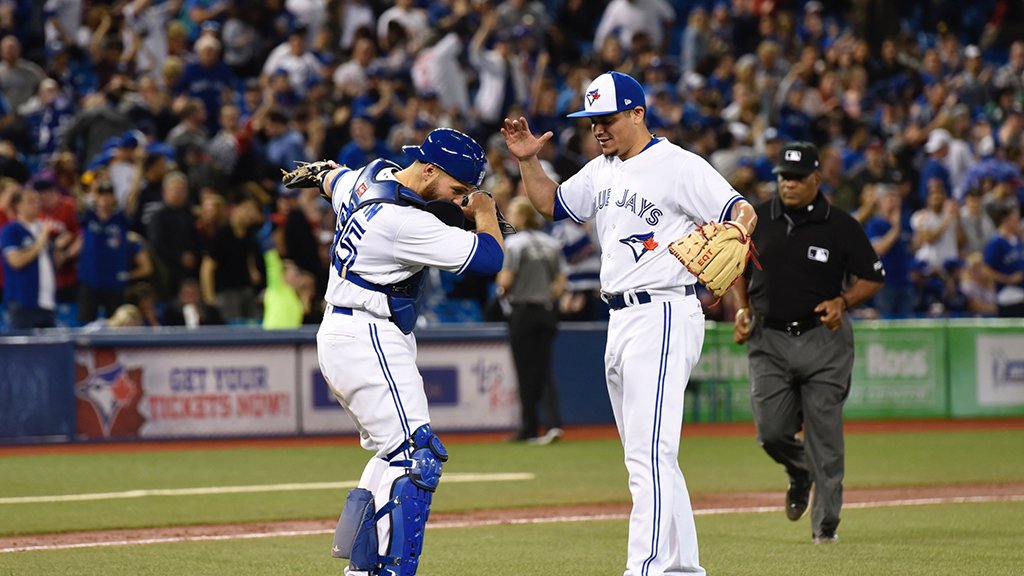 Martin and Osuna Bring Back the ‘Knock Knock’ Routine for 2017 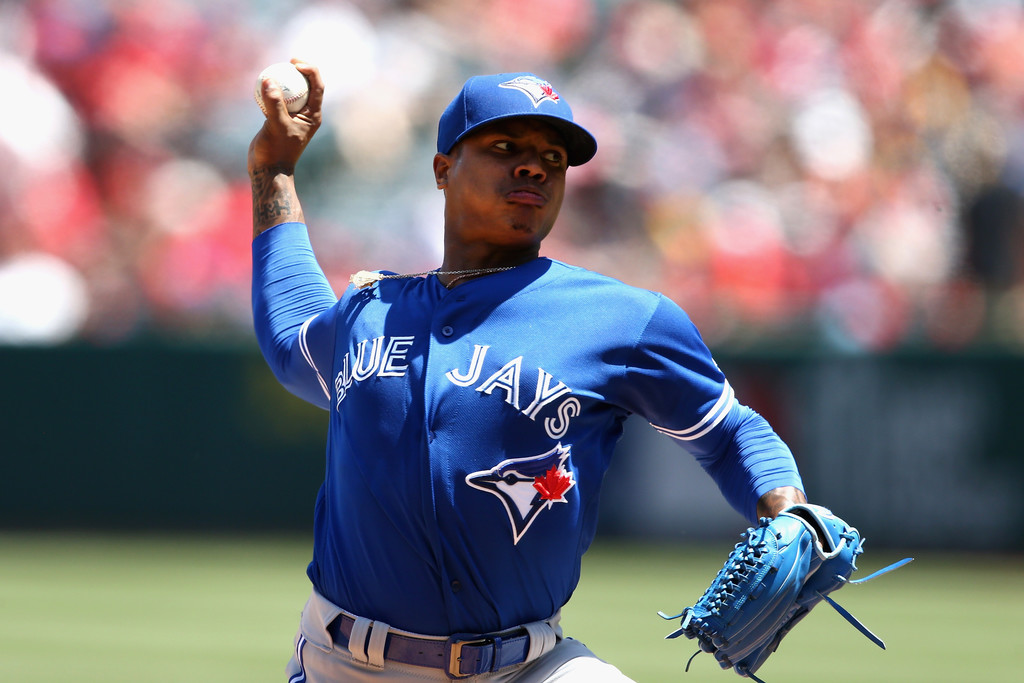