The Toronto Blue Jays surely intended for this offseason to play out much differently. While the Jays made a  few shrewd free agent signings, it’s been a winter of discontent in Toronto.

The Jays let most of their free agents walk, several which have signed lucrative deals with other teams (Edwin Encarnacion and Brett Cecil). The Blue Jays missed out on Dexter Fowler. The club still hasn’t addressed their needs in the bullpen.

The Blue Jays have a slew of fourth outfielders and platoon players, but they lack a true everyday first baseman, left fielder or right fielder. And further down the priority list, the Blue Jays don’t have a capable backup catcher to take some of the workload off Russell Martin.

For all their shortcomings, the Blue Jays can salvage their offseason by doing one simple thing – signing Jose Bautista.

This is all pivoting off of an interesting piece by Dave Cameron at FanGraphs, one in which he believes the Blue Jays can make up for many of their shortcomings this winter by bringing back Joey Bats.

There are plenty of salient points in the piece; the main takeaway I got out of it was this – the combination of Jose Bautista and Kendrys Morales in the short-term has less of a chance of going sideways than Edwin Encarnacion and whomever you figure the Blue Jays may have gotten to patrol the outfield in the long-term.

From a front office perspective, it’s a brilliant play to re-sign Jose Bautista. If it’s reached a point where Bautista and his agent are willing to take a one or two-year deal, there’s very little risk involved for the Blue Jays.

One year … one measly year may be all it takes to bring Jose Bautista back into the fold as a Blue Jay. And for all of Bautista’s shortcomings, there’s no such thing as a bad one-year deal.

Not only that, but from a PR perspective, the Blue Jays could bring back one of the most beloved Blue Jays of all time for one final swan song in Toronto.

And it’s not as though this would be a Kevin Millar or Omar Vizquel-esque signing for the Blue Jays; Jose Bautista is still a great player with offensive potential. A player who’s had one bad year in the last seven. Bautista’s “worst” season just so happened to be the most recent one.

It would be a win-win for both parties. For Jose Bautista, by taking a short-term deal with the Blue Jays, he could enter the market next year without the draft pick dangling around his neck. He’d position himself much better to get a multi-year contract next offseason as opposed to this one.

The Blue Jays are still a contending team in their current configuration, but they’re also  in the midst “we’re not quite sure where we are” identity crisis. Jose Bautista would help the Blue Jays in the short term and bridge the gap towards whatever Mark Shapiro and Ross Atkins have planned.

You also have to factor in that the front office likely earmarked around $20 million dollars towards an impact player for the Blue Jays roster in 2017. Whether that was for Edwin Encarnacion, Dexter Fowler or Jose Bautista.

This isn’t the dream scenario which everyone pictured. The Blue Jays probably didn’t envision their offseason hinging on bringing back Jose Bautista. Bautista surely didn’t foresee himself settling on a short-term contract, but if he wants to play in 2017, he might have to.

The Toronto Blue Jays would be a better team with Jose Bautista on the roster than without. And considering the lack of options out there on the market – both free agency and trade – the Blue Jays an ill afford to let this golden opportunity pass them by.

If Atkins and Shapiro were slow playing the market in the hopes of Bautista’s asking price would plummet, it worked. But given that it’s January and a few other teams are rumoured to be interested in Jose Bautista, the Jays are dangerously close to overplaying their hand.

The Blue Jays have all the leverage here; Jose Bautista has very little. Coming back to Toronto requires Jose Bautista to eat some crow, but again … better to have a place to play on Opening Day than sitting around until after the draft. 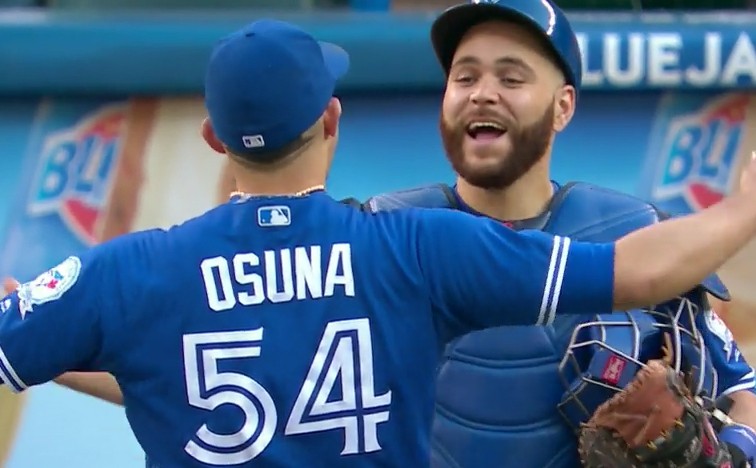