The Blue Jays Will Either Make History or Soon Be History

It’s settled; things are going to go one of two ways for the Blue Jays in the ALCS. They’ll either make history by becoming the second team in LCS history to come back from being down 3-0, or they will simply be history.

That’s basically been the entire series in a nutshell. And the frustrating part is both the Indians and Blue Jays have been dead-even teams in the offense department.

It’s been a series of razor-thin margins and unfortunately the Blue Jays have been on the losing end every single time. Despite boasting playoff-calibre starting pitching and arguably the better starting staff, it’s the Indians who are out ahead 3 games to 0.

If you’re a Blue Jays fan, this was your worst fear confirmed. This was the Blue Jays team which you may have worried would show up in the Wild Card game or ALDS, but they didn’t. And now that offense-starved Blue Jays lineup has reared its ugly head once again at the worst possible time of the season.

At first glance, I thought it looked like two completely different Blue Jays teams from the ALDS to the ALCS. But they’ve been the same team the whole damn time.

The only difference is the Texas Rangers were either massively unprepared to face the free-swinging Blue Jays, or the Jays did their homework on the Rangers. It may be a little bit of both, but it’s evident that the Indians are a completely different animal.

The book is out on the Blue Jays, and it likely has been for a long time now, but the Indians exploited these weaknesses like nobody else.

In essence, these have all been “one bad pitch” ball games; meaning one pitch had been the difference-maker in most of these games. One bad pitch; that’s hardly enough room for error, even for the most seasoned pitcher.

I want to stay positive and be optimistic about the Blue Jays’ chances to extend this series, but the Indians have picked away at the Blue Jays with such precision that it’s difficult to envision that not happening again in Game 4.

The Blue Jays got a gift and they wasted it. Trevor Bauer was knocked out of the after only two outs. The Indians bullpen had to collect 25 outs and they did so with ease … as if they knew that was going to happen.

The Blue Jays faced six relievers out of the Indians bullpen; ample time and ample arms to get something going against Cleveland and the Jays could nary do anything.

Just win one. And then one more. And one more after that.

I’m not sure if they can shock the world a la the 2004 Red Sox. But you’d hate to see the Jays finish the 2016 season in such a disappointing fashion.

Ian Hunter
Ian has been writing about the Toronto Blue Jays since 2007. He enjoyed the tail-end of the Roy Halladay era and vividly remembers the Alex Rodriguez "mine" incident. He'll also retell the story of Game 5 of the 2015 ALDS to his kids for the next 20 years.
Tags : ALCS     Cleveland Indians     Playoffs 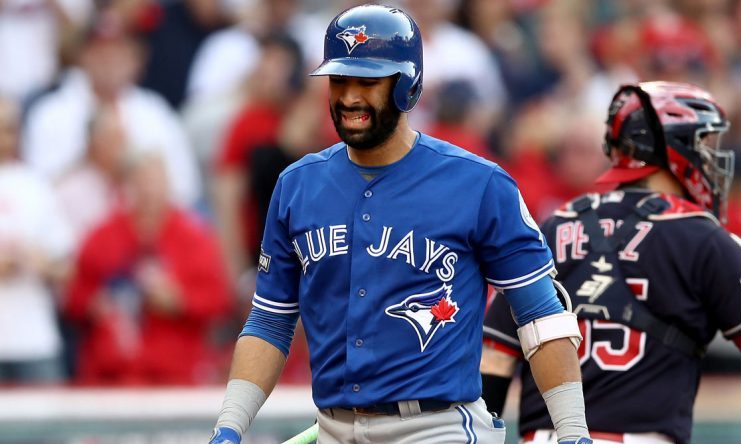 3 Things Ahead of ALCS Game 3: Bautista’s ‘Circumstances’, The Offense, and It’s Time to Get ‘Toronto Loud’