The 2013 season certainly has had its share of highs and lows for the Toronto Blue Jays. But it’s moments like yesterday’s dramatic walk-off win that reiterate just how talented this team truly is.

Down by three runs in the bottom of the ninth, the Blue Jays stormed back and scored four runs, the catalyst of course being Munenori Kawasaki’s double to the gap.

Out of all the Blue Jays photos, screencaps, and GIF’s I’ve seen this season, I think the one above is my absolute favourite so far, because it very clearly captures what the essence of baseball is all about … fun.

There’s no question that Munenori Kawasaki is fun personified. Just like John Gibbons said, the game-winning hit couldn’t have happened to a better person; you could really see Kawasaki’s pure and unadulterated joy as he rounded the bases.

He may not be the biggest offensive threat in the lineup, but Munenori Kawasaki’s plate discipline is not that if your prototypical bottom of the order bat. Kawasaki really does know how to make the most of what he has.

There’s no telling what will happen with Munenori Kawasaki once Jose Reyes comes off the disabled list, but you can truly tell that he is making the most of his opportunities with the Blue Jays right now. And above all else, he’s having fun doing it.

Aside from Munenori Kawasaki’s dramatics, I think the one takeaway most people will remember from this game is Brett Lawrie’s little outburst after Luis Rivera didn’t send Lind home after he flied out to right field.

Nobody knows for sure what Lawrie said to Rivera, but judging by John Gibbons reaction, Brett must not have had very kind words for his third base coach. Good thing Gibby called him out on it, because behaviour like that simply should not be tolerated.

It’s one thing to act like that towards an umpire, but it’s another thing entirely to show that kind of disrespect to a coach on your very own team. Thankfully John Gibbons noticed it right away and corrected that behaviour.

Lawrie displayed some questionable coping tactics earlier in the series, and frankly his ejection on Friday was warranted. Even though it appeared Brett was trying to stifle his anger as best he could, the umpire saw the flipping of the batting gloves as an offense worth of ejection.

Sure, Brett Lawrie is still only 23 years old, and that’s relatively young for a professional baseball player. I’m sure we can all look back and think of some stupid things we did when we were 23, but the problem is Lawrie’s mistakes are out there for everyone to see.

I don’t believe John Gibbons needs to go as far as Richard Griffin suggested and make an example out of Brett Lawrie by benching him for tonight’s game, but it’s definitely something the Blue Jays should be mindful of moving forward.

While I appreciate that Brett Lawrie plays the game with a level of intensity that very few baseball players do, it shouldn’t allow him to fly off the handle and go off on his teammates or coaches. 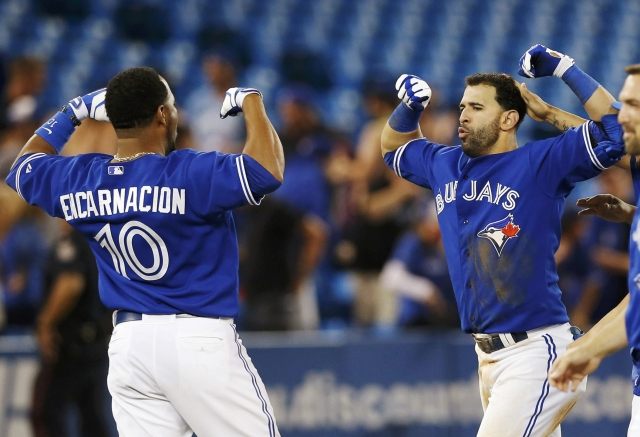 Bautista Batting Second … Why Not?

Due to some injuries, lineup tinkering has been somewhat of a necessary evil for John Gibbons here in the early going. He’s had to adjust on the fly and play around with several lineup configurations, among one of them is batting Jose Bautista second.

It might seem a little unorthodox to have Bautista batting second and Encarnacion batting third, but I actually quite like it. Right now, the Blue Jays top four hitters (Lind, Bautista, Melky and Encarnacion) are occupying the top four spots in the lineup.

In 13 games since moving into the two hole, Jose Bautista has collected a total of 22 hits and is batting .448. Edwin Encarnacion is batting .333 over that same stretch with a total of 17 hits. 13 games may be a small sample size, but it’s a promising start.

The thing I like most about having Bautista and Encarnacion batting second and third is that it seems like they have either been on deck or were due up in those key game-changing situations these past few weeks.

Having them in the top of the order may only net Jose Bautista and Encarnacion an extra at bat or two per week, but those extra at bats are now being taken by two of the Blue Jays best hitters. And more often than not, they’ve been in high leverage situations.

John Gibbons may be a man who is constantly tinkering with the starting lineup, but I believe we’ll continue to see Cabrera, Bautista, Encarnacion and Lind penciled into the top of the order for the time being.