Life in Limbo for J.A. Happ

James Anthony Happ; on any other Major League baseball team, he would easily crack the starting rotation. On the 2013 Toronto Blue Jays? Not so much.

J.A. Happ has done everything the Blue Jays have asked of him in Spring Training. And yet he’s still destined for life in limbo in Triple A Buffalo. Frankly, I can’t blame him for being upset about being on the outside looking in.

While he may be a fairly good starting pitcher, J.A. Happ was the victim of circumstance. He was the centrepiece of a 10-player deal prior to the trade deadline, and at the time projected to be the Blue Jays number three starter.

Then when the city of Toronto and Blue Jays fans everywhere were sent into a frenzy after the acquisition of R.A. Dickey, Happ was likely the only man who was less than thrilled with the Blue Jays bringing in a Cy Young Award winner.

That’s because in one fell swoop, J.A. Happ went from an all-but-guaranteed spot in the starting rotation to being tagged for Triple A Buffalo. So one can understand why James Anthony would be a little perturbed about missing out on the Opening Day roster.

Right now though, Happ is an afterthought. With the acquisition of three shiny and new stating pitchers, J.A. has been pushed out of the starting rotation. It’s unfortunate, but I guess that’s one of the pitfalls of baseball as business.

That’s not to say J.A. Happ won’t get a chance to pitch with the Blue Jays this season. As we know all too well, pitchers frequently get hurt … so whether it’s the starting rotation or the bullpen, J.A. Happ will see time in Toronto in 2013.

There have been some rumblings in the Twitterverse that J.A. Happ should take over Ricky Romero’s spot and break camp in the starting rotation. I have to say … it isn’t the craziest idea that’s ever been floated across the internet.

Heck, even Jerry Howarth thinks the Blue Jays should break camp on Opening Day with J.A. Happ on the 25-man roster. I say if he makes this team better and he’s the best viable option out there, then by all means they should go for it.

The Blue Jays at least have to give Romero the benefit of the doubt and allow him somewhat of a leash to begin the season. However, if he continues to falter as the calendar turns to May, then Alex Anthopoulos should not hesitate to call up J.A. Happ and get him on the zipline from Buffalo to Toronto.

Most teams would be more than happy to have Happ as a mid-rotation starter, but the Blue Jays are fortunate that they have a backup plan … something Toronto severely lacked last year, as they had to reach back into the minors for several starting pitchers.

Ricky Romero had a disastrous season and yet still paraded himself out there every five days, even thought he was hurt. Ricky was out there on an island all by himself … the Blue Jays simply had no other options left. Now they do.

This time around though, the Blue Jays learned an invaluable lesson … that you can never have too much depth. It really does pay to have a “Plan B” in place, and J.A. Happ is the Blue Jays official “break in case of emergency” starting pitcher.

And I guess that’s a luxury the Blue Jays have which many other teams don’t; they can call up an experienced Major League starting pitcher at a moment’s notice. What other club’s sixth starter has 96 career starts and over four years big league experience under their belt?

I suppose that’s the one thing J.A. Happ can seek solace in as he prepares to begin his season in Triple A with the Buffalo Bisons. It’s not “if” the Blue Jays will call this season … but “when”.

Ian Hunter
Ian has been writing about the Toronto Blue Jays since 2007. He enjoyed the tail-end of the Roy Halladay era and vividly remembers the Alex Rodriguez "mine" incident. He'll also retell the story of Game 5 of the 2015 ALDS to his kids for the next 20 years.
Tags : Buffalo Bisons     J.A. Happ     Ricky Romero     starting rotation
Previous post

Santos or Janssen: Who Has the Leg Up as Closer? 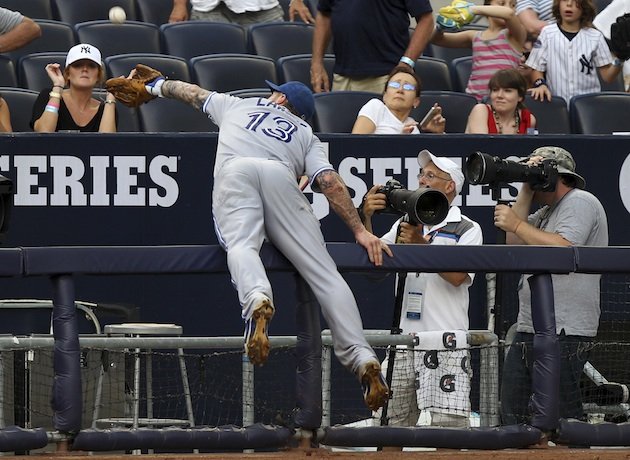 Should Brett Lawrie Dial It Back?