A grammatically challenged man once said “if it ain’t broke, don’t fix it”.

For a man who has tallied 124 home runs over the past three years, repair is the last thing one would think Jose Bautista’s swing needs. But after sustaining a season-ending wrist injury, perhaps it is time to look into the idiosyncrasies of his swing.

After fiddling around with his swing for years, Jose Bautista finally got into a groove in the latter part of the 2009 season after working with hitting coach Dwayne Murphy and Cito Gaston. They finally perfected a swing and stance that maximized the power out of Bautista’s 190 pound six-foot frame.

Over the past few years, the idiosyncrasies of Jose Bautista’s swing and stance have become second nature to most, but it was only upon closer inspection that I noticed a couple things which may or may not be a cause for concern.

The first thing that jumps out to me is the positioning of Jose Bautista’s feet in the batter’s box prior to his stride.

Occasionally batters will turn their plant foot in towards their body, but in this particular instance below, Bautista’s foot is at a very large angle in … nearly perpendicular to his body

I suppose his foot position is almost irrelevant because he ultimately ends up in the correct position following his stride. Batters have and inordinate amount of foot positions prior to swing, all that matters is they follow-through correctly.

The second thing is how Bautista’s left foot (or his plant foot) nearly rolls over onto itself, as the torque from his right side nearly twists his ankle. Frankly, I think it’s a miracle that Jose has never sustained an injury as a side effect of his ferocious swing.

Again, I don’t claim to be a kinesiologist, but I can’t imagine twisting one’s foot like that is a good thing. Anything I’ve ever read indicates it is paramount to keep your plant foot flat on the ground on the follow-through.

I suppose the next step in the evolution of Jose Bautista’s follow-though can be illustrated best with Adrian Beltre’s post-swing poses. If the momentum carried Bautista a little further, he would fall onto his knees much like Beltre does.

And lastly, the final thing I noticed about Jose Bautista’s swing is what happens with his wrist during his follow-through. This is where we can begin to see the warning signs of Bautista’s impending wrist injury.

Compare that screenshot above with this one below from a few years ago. Although Bautista maintains the same one-handed follow-through, notice the position in which he snaps the bat back is much higher.

Rather than snapping back below the waist, Jose’s wrist is just below shoulder-height level. Although it’s only for a split second, snapping back higher also doesn’t force his left wrist to carry the entire weight of the bat for quite as long.

Here’s a side-by-side split on the differences between Jose Bautista’s swing from early in 2012 and the exact swing in which he sustained his injury on at Yankee Stadium on July 17th:

Both arm angles themselves aren’t all that different, but there’s a stark contrast between the two when it comes to Jose’s arm position at the apex of his swing. On Bautista’s follow-through on the right, his bat is nearly touching the ground.

In the offseason, luckily we have the liberty of time to sit back and review things like these, and Jerry Howarth also seemed to notice this eccentricity with Jose Bautista’s swing as well speaking on the Fan 590 last week:

“I was watching Jose’s swing a lot in video here in the winter time, and what I noticed was, especially after his home runs but on a lot of his swings, after the follow-through, he would snap the bat back over his head with his left hand.

I’d love to see him eliminate that, and I think that will help him a lot as far as his body and the sheath holding the tendon.”

Much like Jerry Howarth, the thing that concerns me the most isn’t even Jose Bautista’s foot position prior to his swing, or even that he rolls onto his ankle, it’s what he does after his swing that is

The scariest thing of all is Bautista doesn’t just drop the bat on his follow-through, he snaps it back in what can only be described as a violent fashion.

Simply put, a wrist isn’t supposed to bend that way. Multiply that by one-thousand swings like that every season, and you can see why it would take its toll on Jose’s wrist.

After combing through numerous videos, I noticed that the one-handed follow-through is something that has become much more prevalent with Bautista’s swing the past few years. That aspect itself isn’t all that troublesome, it’s the follow-through afterwards that could be causing the issue.

As the ever-wise Tao of Stieb noted back in January, this swing trait appeared very evident when MLB 13 The Show decided to let the fans vote on three potential covers featuring Jose Bautista. In two out of the three covers, Jose only has one hand on the bat during his follow-through.

I’ll say this again about the Bautista cover vote for MLB 13:Two of the three covers show why his wrist is messed up. Scary.
— Tao of Stieb(@TaoofStieb) January 24, 2013

Wrist injuries are among the worst that can happen to a hitter (the equivalent to Tommy John surgery for a pitcher), as the ill effects can be felt for a long time. Even once a player has completely recovered from the surgery, sometimes they linger for years after the fact.

With exception of Rickie Weeks, each of those hitters experienced a significant power drop-off in their subsequent seasons following their wrist injuries. One hopes that like Weeks, Jose Bautista becomes the exception to the rule.

So are all these symptoms simply red herrings, or is there any merit in these idiosyncrasies of Jose Bautista’s swing? Up until last July, I wouldn’t dare question the methods of Joey Bats because he was crushing the baseball with authority. Until that point, everything Jose Bautista did was working.

However, now that he missed a large chunk of time due to an injury caused by his violent swing, now seems like the opportune time to tweak some of those flaws before they become a much bigger problem in the future.

Thanks to the benefit of hindsight, we can now see the beginnings of what may have been some problematic symptoms of Jose Bautista’s swing.

It’s true what the idiom says … if it ain’t broke, don’t fix it. While Jose Bautista didn’t break his wrist, a substantial injury like that warrants a “fix” … or at the very least, a “tweak”. Otherwise, I’m fearful that history might repeat itself.

Ian Hunter
Ian has been writing about the Toronto Blue Jays since 2007. He enjoyed the tail-end of the Roy Halladay era and vividly remembers the Alex Rodriguez "mine" incident. He'll also retell the story of Game 5 of the 2015 ALDS to his kids for the next 20 years.
Tags : home runs     Jose Bautista
Previous post 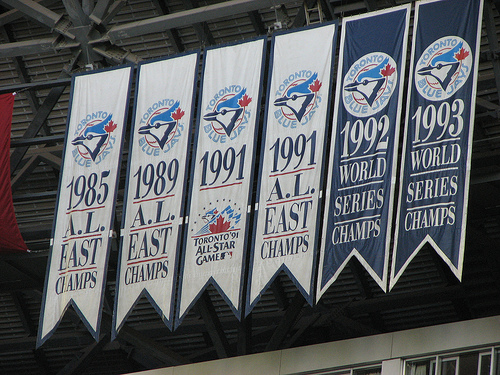