Finally … it’s over. After almost 12 months of speculation, the John Farrell issue has finally been put to bed. I think I can safely say that that I’ve ever been so happy about a resolution to a nagging rumour during my span as a Blue Jays fan.

While the result may not have painted the Blue Jays in the best light, I’m just relieved that we can finally move on. And now that it’s been 36 hours or so since the initial report of John Farrell going to Boston, I think I can finally form a concrete thought on what transpired.

Even after Alex Anthopoulos had a chance to speak to the media yesterday, I don’t think anything he said really diffused the situation at all. If anything, it seemed like the information he revealed with his interactions with John Farrell actually made things worse.

Firstly, was the fact that John Farrell admitted to AA that coaching for the Red Sox was his dream job; that was the biggie. Once Farrell let that cat out of the bag, I can totally understand why Alex would want to let him go.

Yet somehow, I can’t help but get the feeling like Farrell just used the Blue Jays as a launching pad for his eventual return to Boston.

At the time of his departure from the Red Sox organization, Terry Francona was fully entrenched as the Boston Red Sox manager. So Farrell headed to Toronto, got his feet wet in the manager’s chair, and will now use that experience to better himself with the Red Sox. As AA said, it really was a unique situation that all these events managed to fall into place.

Although the majority of my initial disdain was towards Alex Anthopoulos at the dealing with this entire John Farrell situation, I now realize that AA’s hands were pretty much tied the instant Farrell said he wanted to go to Boston.

I mean, what’s the point of keeping somebody around that doesn’t want to be with the Blue Jays? When you look at it from that standpoint, it’s not as much of a PR nightmare as initially thought, but Toronto still comes off as being the weaker sister.

In actuality, are the Blue Jays really that much worse off after the departure of John Farrell? I honestly think the difference might be negligible, and there are a myriad of candidates out there who could step in and do the same job, maybe even better.

The funny thing about all of this is would any of it have happened had the Red Sox not collapsed last year? Let’s say hypothetically that Boston wins Game 162 of the regular season and Tampa Bay loses …  does Terry Francona get the boot?

It seems like it was all a domino effect once Boston missed the playoffs. And to think, had the Red Sox pulled out just one more win during the regular season, maybe this entire battle over John Farrell doesn’t even happen.

Perhaps in the alternate universe in which Biff doesn’t go back to 1955 and receive Grays Sports Almanac, John Farrell stays on as skipper of the Blue Jays.

By no means am I insinuating that Farrell didn’t give his all during his days with
the Toronto Blue Jays. He certainly did a capable job with the pieces he had, but
in retrospect his managerial era feels a little tainted knowing that his heart
remained in Boston the entire time.

That’s why when
the Blue Jays select on their next manager, it’s imperative that they
find the perfect candidate who views managing the Blue Jays as their “dream
job”. Because Toronto shouldn’t be a layover in a manager’s
journey, it should be a destination.

Ian Hunter
Ian has been writing about the Toronto Blue Jays since 2007. He enjoyed the tail-end of the Roy Halladay era and vividly remembers the Alex Rodriguez "mine" incident. He'll also retell the story of Game 5 of the 2015 ALDS to his kids for the next 20 years.
Tags : Alex Anthopoulos     Boston Red Sox     John Farrell     manager     new manager 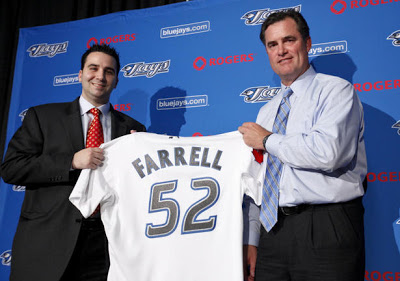 So Long, John: Farrell Flies the Nest for Boston