With the Tao of Stieb’s Roto-Hoedown draft set to go down this weekend and The Blue Jay Hunter draft scheduled for Monday, I thought I would share some tips for draft day.

1.) Concede one category to win two

In my first fantasy baseball draft last weekend, I drafted the golden trifecta of strikeout kings: Mark Reynolds, Adam Dunn and Carlos Pena. While my team’s batting average category is going to take a huge hit as a result, it sets me up to win RBI’s, HR’s and even OBP.

This is a bit of a risky move, but I would much rather have sluggers on my team rather than guys like Ichiro or Derek Jeter who hit for average and can get you some steals, but not much else.

Last season I preached the same advice – if it all possible, avoid drafting players in their sophomore year. I subsequently ignored my own advice, and picked up Evan Longoria in 3 of my 4 leagues last season. Luckily, the move worked in my favour, but as far as I can remember Longoria was one of the few exceptions to the rule.

It’s difficult to get all wrapped up in the hype for guys like Tommy Hanson, J.A. Happ and Clayton Kershaw. Especially with rookie starting pitchers without a proven track record, it’s difficult to guage what their second season will be like in the majors.

As usual, there are plenty of players who have new homes to begin the 2010 season.

Will Cliff Lee benefit by moving to the more pitcher-friendly park in Seattle? Will Jake Peavy’s ERA inflate after moving from the confines of Petco Park to US Cellular Field? And can Javier Vazquez make the successful transition back to the American League?

All of these things should be taken into consideration when making your picks.

4.) They had the time of their life, but will they do it again?

Last year, their were multiple candidates that seemingly came out of nowhere to snag some MVP votes. I’m talking about players like Kendry Morales, Ben Zobrist, and Pablo Sandoval.

Will they do it again, or were they just some flash in the plan? I have a tough time believing that lightning will strike twice with these guys, so don’t be tempted to draft these fellas very high in your league.

There is no way of knowing if the team you draft at the beginning of the season will remain healthy all year, but you can do yourself a favour by checking the injury reports before draft day.

Especially with high-ranked picks such as Jose Reyes, Joe Nathan, Ian Kinsler and Josh Hamilton, you don’t want to gamble on guys who might begin the season on the Disabled List.

Definitely have a plan of attack going into draft day, but don’t abandon all hope if Roy Halladay gets drafted one pick ahead of you. If the league starts heading in one direction, shift accordingly and continue to fill your roster as needed.

7.) Ride the dark horses to victory

This is where fantasy baseball teams are made or broken. The dark horse players are always the most gratifying to select, and if they don’t pan out then it’s never a big loss to just toss them out onto the waiver wire.

Candidates here include pitchers who are coming back from substantial injuries (Shaun Marcum), positional players who have moved up the depth chart (Matt Wieters), and minor league players who are poised to crack their roster (Randy Ruiz).

Ian Hunter
Ian has been writing about the Toronto Blue Jays since 2007. He enjoyed the tail-end of the Roy Halladay era and vividly remembers the Alex Rodriguez "mine" incident. He'll also retell the story of Game 5 of the 2015 ALDS to his kids for the next 20 years.
Tags : draft day strategy     fantasy baseball
Previous post 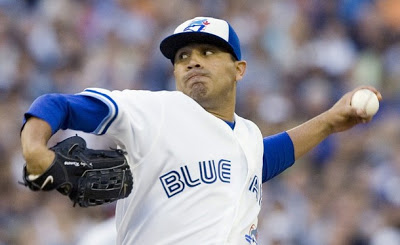