Normally it’s frowned upon to get drunk on a Monday night. But last night’s binge on Travis Snider’s Mash Liquor was an exception.

Everyone in the lineup had at least 2 hits in the 8-6 win over the Minnesota Twins (aside from Marco Scutaro), the biggest of which came off the bat of Travis Snider. If you didn’t see the replays, both homeruns were moonshots in the second deck of the Metrodome.

And how about that Blue Jays offense? It’s showing no signs of slowing down, racking up 19 hits last night and they still lead the league in runs scored with 54. Aside from Overbay and Barajas, everyone in the lineup is hitting over .300. When was the last time you could say that over ¾ of the lineup was doing that (including bench players)?

After Jesse Litsch left the game with an apparently injury, the rest of the pitching staff came in and did a great job. Bullpen Cop Brian Tallet posted 3 innings of solid relief, Golden Boy Jason Frasor pitched a scoreless 7th, Scott Downs struck out the side in the 8th, and although it was a nervous 9th, B.J. Ryan got the save. Although they scared us last week, the “state of the bullpen” is something we can breathe easy about for the time being.

Come on guys, let’s all be troopers and let’s look forward to getting hammered for the second night in a row off of Travis Snider’s Mash Liquor.

Ian Hunter
Ian has been writing about the Toronto Blue Jays since 2007. He enjoyed the tail-end of the Roy Halladay era and vividly remembers the Alex Rodriguez "mine" incident. He'll also retell the story of Game 5 of the 2015 ALDS to his kids for the next 20 years.
Tags : bullpen     Jesse Litsch     mash     Minnesota Twins     Travis Snider 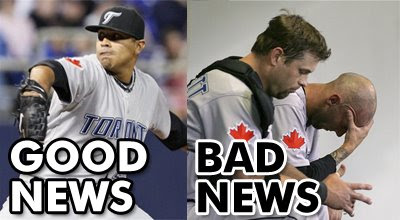