The Blue Jays Have Ditched Their Road Grey Uniforms

Has anyone noticed anything different about the Blue Jays as of late? Not just the fact that they’re 16-4 in their last 20 games and 22-8 in their last 30, it’s something about their uniforms … especially on the road.

It looks like the Blue Jays have abandoned wearing their road greys since just prior to the All-Star break. A tweet by Blue Jays VP of Business Operations Stephen Brooks confirmed the suspicions of many.

Superstition. They like the blues. And if we win, let's keep wearing them. https://t.co/eIJo5un8OO

After a lot of tedious cross-referencing between photos, boxscores and the ever-useful SportsLogos.net, it appears as though the Blue Jays have been solely wearing their alternate blue uniforms since July 11th; a streak of 15 consecutive road games.

Since they’ve been playing so well as of late on the road, the Blue Jays may have just opted to exclusively use the blue uniforms and not risk missing with a bad thing.

This has never really been confirmed, but it seems like the starting pitcher that particular day is the one who determines which uniform the Blue Jays will wear. In 15 consecutive games, the starters have opted for the blue alternates.

No concrete reason has been given by the team for the recent string of wearing blue on the road, but apparently Josh Donaldson wants to keep wearing the blue uniforms because they bring out his eyes.

If the Blue Jays truly are exclusively using blue uniforms on the road, it wouldn’t be the first time they were a little superstitious and opted stay with the true blue look.

As noted by @CarcelMousineau, the Blue Jays quite famously stopped wearing their white panel caps midway through the 1993 season. And we all know how their season finished.

Ian Hunter
Ian has been writing about the Toronto Blue Jays since 2007. He enjoyed the tail-end of the Roy Halladay era and vividly remembers the Alex Rodriguez "mine" incident. He'll also retell the story of Game 5 of the 2015 ALDS to his kids for the next 20 years.
Tags : uniforms 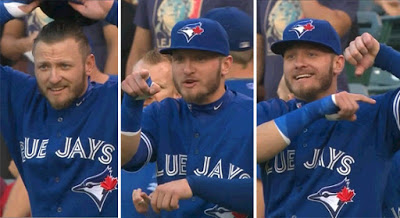 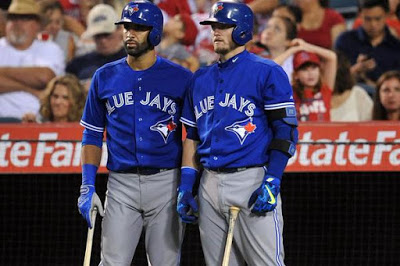 3 Up 3 Down: Donaldson, Price and First Place (Again)