John Gibbons is Back with the Blue Jays

No matter how far and how hard we look, sometimes the answer is right under our noses. And that was definitely the case with the Blue Jays hiring John Gibbons as their new manager.

Gibbons was virtually on nobody’s radar and was never even linked as a candidate to take over as the new manager of the Blue Jays. And in some ways, I think he was the perfect candidate all along … people just didn’t know it.

It’s unfortunate that John Gibbons was the casualty of a 2008 season gone wrong, but it really was a foregone conclusion back then that he was going to get the axe. Much like any instance where a team is struggling, Gibbons was the scapegoat and was sent packing.

However, I really can’t recall having any qualms or issues with Gibbons back then, so I can certainly see why Alex decided to bring him back and give John a second chance.

By all accounts, Gibbons managed the bullpen very effectively and the pitching staff performed very well during his tenure. As noted by Cathal Kelly in the Toronto Star, the Blue Jays pitching staff ranked 6th, 5th, 2nd and 1st in team ERA under John Gibbons from 2005-2008.

John Gibbons also employed a platoon; something we have not seen used by the Blue Jays in a very long time. Some of the players on this roster right now really do lend themselves to a platoon role (Adam Lind, Rajai Davis), so hopefully Gibbons plays to those strengths.

Of course, the thing people will remember John Gibbons for most was his well-publicized spats with Ted Lilly and Shea Hillenbrand. While at the time it looked embarrassing towards the organization, it at least showed that John Gibbons wasn’t willing to tolerate that kind of behavior in his clubhouse.

Aside from that, the thing I remember most about John Gibbons last tour with the Blue Jays was his bevvy of lineup changes. On any given week, you might see five, six or even seven different lineup configurations. Gibbons was certainly not afraid to shake things up, as he used no less than 120 different lineups every season from 2005 to 2008.

At its peak, John Gibbons penciled 131 different batting orders during the 2007 season. While Gibbons may have inked his lineups on a dry erase board, as a comparison, Cito Gaston carved his lineups onto stone tablets; using just 53 different lineups in the 1992 World Championship season.

Gibbons’ willingness to change up the batting order quite often can only be a positive thing for this team. He often tinkered with the batting order, but really that’s the only way to find out to how to get the most out of hitters; not by typecasting them into”roles, but by experimenting and discovering what works best.

John Farrell used many different lineup configurations in his two seasons as manager of the Blue Jays, but that was predominantly out of necessity due to the slew of injuries.

The obvious question about bringing John Gibbons back is “why didn’t they hire him in the first place?” Things were a little different back then … it was just a year and a half since the Blue Jays fired Gibbons in the first place, so it would have been a little odd to bring him back so soon.

Not to mention, it seemed like Alex Anthopoulos was hoping to hire the next great baseball mind as the Blue Jays manager back then. Maybe ego had something to do with it … because laying claim to hiring baseball’s next brilliant manager would be quite the achievement for AA.

Ultimately it didn’t, but I can’t really fault Alex and the front office for choosing John Farrell in the first place. Besides, had the Blue Jays not gone with Farrell back in 2010 originally, it wouldn’t have lead to this window opportunity for John Gibbons.

One could argue that even the league’s best managers only make a negligible difference on the outcome of the game, and I would tend to agree with that school of thought. Ultimately the players are responsible for most of the action; it’s just the manager’s job to oversee it.

I think some of the best managers are very self-aware that they only play a small part in the success of a Major League team. By his comments at the press conference yesterday, John Gibbons falls into that niche:

“The bottom line, whoever you select as a manager, it all comes down to what happens on the field. And that’s how we’re all judged.

Now it’s the manager’s job and the coaching staff’s job to pull it together as a team and get the most out of these guys.

That’s our number one job; get the most out of these guys and get out of the way, to be honest with you.”

As someone who already has experience managing the Blue Jays, perhaps there is no one more self-aware of his own managing lifespan than John Gibbons. Not that he should live in fear of getting fired, but that could actually subconsciously work as a motivational tactic.

It’s something that was obviously lacking with John Farrell; while his head was in the clouds fantasizing about his dream job in Boston, he was letting the Blue Jays quite literally run wild.

In retrospect, it all makes sense because he had not one team interested in his services, but two. There was never the fear that John Farrell might not have a job.

I can’t speak for the entire Blue Jays blogosphere, but I can’t think
of anyone better than John Gibbons to take over as skipper of the
Toronto Blue Jays once again. After all, it’s the players who will ultimately power this ship … it’s just John Gibbons’ job to man the rudder and guide them in the right direction.

Ian Hunter
Ian has been writing about the Toronto Blue Jays since 2007. He enjoyed the tail-end of the Roy Halladay era and vividly remembers the Alex Rodriguez "mine" incident. He'll also retell the story of Game 5 of the 2015 ALDS to his kids for the next 20 years.
Tags : Alex Anthopoulos     John Gibbons     manager     new manager 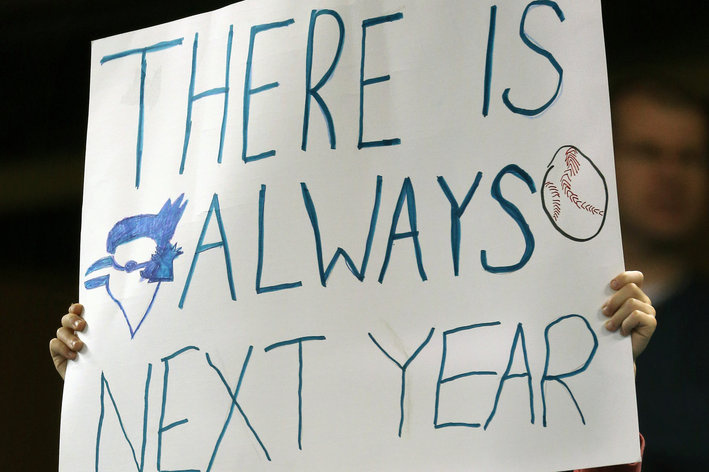