They came, they saw, they almost overcame a seven run deficit, but they came up just a tad short. It certainly was one hell of a way to lose a ball game.

Thanks to the graciousness of The Man with the Golden Arm from 1 Blue Jays Way, I was able to take in last night’s contest at the Rogers Centre. Now while all our stories from our different perspectives may differ slightly, this is my view of the 9-8 loss from Section 130C.

Right out of the gate, we were delayed in traffic for about 45 minutes. Long enough to hear that Brett Cecil gave up a six-spot in the top of the first inning. Luckily, the Blue Jays got one back in the bottom of the frame thanks to an Evan Longoria error.

So I meet Mr. Golden Arm and we proceed to our seats and I discover it’s in Section 130C, the very last section on field level on the left field side. I’m convinced the seat choice was for heckling purposes, and it was.

I have to say, I was quite impressed on the amount of dirt he was able to dig up on Carl Crawford. Things pertaining to college scholarships, his middle name, marital status of his parents, stuff that really hits at the core of these major league players.

Considering the score of the ball game when we walked into the Rogers Centre (which was 8-1 by the way), there was an air that something was going to happen tonight. Whether it was someone from our entourage getting tossed or the Blue Jays pulling out a killer victory, I wasn’t quite sure at that point.

Brett Cecil did not have his usual Houdini act going and was yanked after he walked Rocco Baldelli to begin the third inning. At that point, if Cito Gaston was going to put in Brian Tallet, the Blue Jays may as well have waved the white flag.

Luckily, it was Josh Roenicke who got the call and he did a phenomenal job as the long man of the night. 3 innings of work and only one real mistake, a solo home run from B.J. Upton. I remember it being a tower shot to the second deck because Travis Snider didn’t even budge from his position in left field once the ball was hit.

But that’s where things suddenly got very interesting.

Snider leads off the bottom of the frame with a double and then advances to third base on Yunel Escobar’s single. Following that, Jose Bautista has an epic at bat against James Shields where he throws 15 pitches and Jose fouls off 11 of them.

We were all anticipating a Bautista Bomb, but he flies out to medium depth right field but Brian Butterfield sends Snider on the sac fly anyway and he’s out by a mile at home plate. Apparently Snider misinterpreted the signs as Butterfield only wanted Snider to fake running to home.

The following inning, Jose Bautista gets that much deserved Bautista Bomb on an 84 MPH inside changeup. Off the bat, it sounded like it was going to be a long fly out, but with the roof open it had the carry to make it all the way to the second deck. Suddenly, this game just got even more interesting.

Onto the seventh inning, and John Buck leads off with an opposite field solo shot and gets the Blue Jays within two runs of the Rays. Then the unthinkable happened: Jose Bautista saved us … again. Yet another two run home run ties it up. It’s safe to say we were losing our shit in Section 130C.

Honestly, it took me a good full inning to finally settle down from that. It had the same feeling when he hit that go ahead home run against the Yankees back on August 23rd. Now I’m not saying there’s a pattern going on here, but that’s now two games in a row that Golden Arm and I have attended where Bautista has hit two bombs a piece.

At this point, the atmosphere is palitable within the Rogers Centre. The crowd was only 14,305 strong, but it’s a loud 14,305. Rally towels are waving like crazy and the momentum is on the Blue Jays side.

Shawn Camp is the next reliever to make an appearance and it’s safe to say it didn’t go well. It was very uncharacteristic of him to give up back to back walks, but there were two out when Jason Barltett stepped into the box.

He lines one through the right field side, and Aaron Hill makes a diving stab and fires to Overbay to rob Bartlett of a hit. I was so anamoured with Hill at that point, that I proclaimed I forgave him for missing that ground ball during Brandon Morrow’s near no-hitter.

We progress to the ninth and the beloved Blue Jays closer comes into the game, and suddenly an argument errupts in our section as to the merits of Kevin Gregg. One camp says he sucks, the other praises his ability. One thing was for sure, you always get your money’s worth during a Kevin Gregg outing.

First batter: Carl Crawford. our target for verbal fodder all evening. He proceeds to fly out to begin the ninth inning and we feel as though our job is complete. Then another requirement of a Kevin Gregg outing, a walk. No big deal. Then Carlos Pena walks … okay, starting to get a little nervous here.

This is where things start to go down the tubes: what appeared to be a double play was botched by either Yunel Escobar or Kevin Gregg covering at first base. It looked like Escobar had plenty of time, but he either side-armed it first or the throw was off-line entirely.

Here we are in the bottom of the ninth inning, and frankly I’m shocked that nobody in our section has been tossed yet. Heckles are flowing freely in the direction of Carl Crawford, however nothing but respectable insults (if that’s even possible).

I guess that was the straw that broke the camel’s back, as Crawford finally had enough and motioned over to us as if he was calling us out. Security comes over to the section and it’s like lockdown in Rikers Island.

I myself wasn’t really the ring-leader of the heckling, but Golden Arm told me that by Crawford acknowledging our presence, that was the highest form of compliment a heckler could ever receive.

The bottom of the ninth was pretty anti-climactic after we watch the Blue Jays close a seven-run gap, only to throw the game away on the top of the ninth inning.

Somehow though, the loss didn’t seem to sting so bad because we got into the head of Carl Crawford. So if you see him boot or bobble a ball in left field at any point in this series, it’s probably thanks to the bug The Man In the Golden Arm put in his ear.

Thanks again to the boys at 1 Blue Jays Way, Jeremy from 500 Level Fan and Andy Mc for a great game and a very memorable experience at the Rogers Centre.

Ian Hunter
Ian has been writing about the Toronto Blue Jays since 2007. He enjoyed the tail-end of the Roy Halladay era and vividly remembers the Alex Rodriguez "mine" incident. He'll also retell the story of Game 5 of the 2015 ALDS to his kids for the next 20 years.
Tags : Brett Cecil     Carl Crawford     heckling     Jose Bautista     Tampa Bay Rays 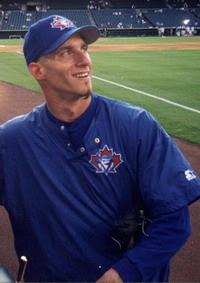