Two Tickets to the Gonz Show

Toronto, line up to get your tickets to the Gonz show.

The signing of former Red Sox and Reds shortstop Alex Gonzalez has capped off what has been an unusually active past few days for the Jays in the free agent market.

First they sign John McDonald to a reported one year deal as a stopgap solution at shortstop for 2010. Then it’s revealed that it’s actually a two year deal, then we find out that John McDonald will actually be the backup SS and that his role on the team is undefined. Now they sign Alex Gonzalez to a one year deal (with option for a second)

Gonzalez (or A-Gonz as I will probably call him) is the final piece of the puzzle when it comes to the Blue Jays infield. At $2.75 million for one year and a $2.5 million option, the Gonzalez signing isn’t the biggest waste of money the Jays have ever spent on a shortstop. Just look back to 2008 when they paid David Eckstein over $4.5 million to stand out there between second and third base.

Speaking of Eckstein, I noticed that the Blue Jays have now successfully acquired both the St. Louis Cardinals and the Cincinnati Reds left side of the infield in the exact same way. They traded to get Rolen from the Cards at 3B, and signed Eckstein as a free agent SS. Then they traded to get Encarnacion from the Reds at 3B, and signed Gonzalez as a free agent SS. I guess some people’s trash is another person’s treasure.

Those wishing to complain that a combined $4.25 is too much to pay for both McDonald and Gonzalez in 2010, how about these less attractive alternatives? Orlando Cabrera at a total of $12 million for two years, or resigning Marco Scutaro so some ridiculous three or four year deal upwards of $25 million? I’d rather take the Gonz/Mac combo, thanks.

Believe it or not, this was actually a very smart move which basically forces the hand of the Boston Red Sox. Now their only options are to overpay either Marco Scutaro or Orlando Cabrera, neither of which the Blue Jays were interested in. I tip my cap to you sir, Alex Anthopoulos. Well played, sir.

If anything, at least we can be reassured that nothing will make it past the defensive wall combination of J-Mac and A-Gonz. Consider them the new version of J-Mac and Scoots.

Ian Hunter
Ian has been writing about the Toronto Blue Jays since 2007. He enjoyed the tail-end of the Roy Halladay era and vividly remembers the Alex Rodriguez "mine" incident. He'll also retell the story of Game 5 of the 2015 ALDS to his kids for the next 20 years.
Tags : Alex Gonzalez     free agent signing     John McDonald     Marco Scutaro     shortstop 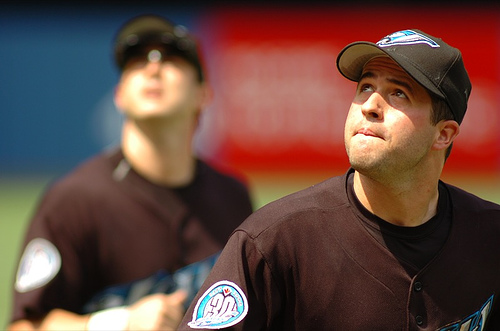 Scratch that – Johnny Mac NOT your starting shortstop