Maybe he should focus more on his music

Image courtesy of SawxBlog
Bronson Arroyo is known for his soulful music, crazy boat parties, and now apparently not being able to pitch in Toronto.

I’m not sure what it is about the date June 24th, but for some reason it causes Bronson Arroyo to fall apart. June 24th 2008 – he lasts only one inning as the Blue Jays light him up for ten runs. Last night was a similar result. Is it possible that we could be entering The Twilight Zone?

Speaking of The Twilight Zone, Vernon Wells hit another home run – his second on a span of just four games. Vernon is also riding an eight game hitting streak in which he’s hitting .342. After being on high alert for weeks, the VWHAS has been lowered to “Elevated” and all is right in the universe once again.

Aside from some trouble early on in the game, Scott Richmond was fantastic once again. He went seven strong innings and capped his evening by finishing off 14 Reds in a row. One home run, one single, two walks – that’s all the Cincinnati Reds could muster against Scott Richmond. As much as the Blue Jays have missed Roy Halladay these past few weeks, it’s guys like Richmond who have stepped up in Doc’s absence and kept this team grounded.

I know we’re not even at the All Star break yet, but can someone call the MLB and tell them to start printing Scott Rolen’s name on the Gold Glove Award for American League third baseman? Rolen made another incredible play last night to not only steal extra bases away from the Reds, but in effect he also stole our hearts. I said it last week but let me just reiterate that I’m sorry for ever doubting how awesome Scott Rolen is.

Ian Hunter
Ian has been writing about the Toronto Blue Jays since 2007. He enjoyed the tail-end of the Roy Halladay era and vividly remembers the Alex Rodriguez "mine" incident. He'll also retell the story of Game 5 of the 2015 ALDS to his kids for the next 20 years.
Tags : Bronson Arroyo     Cincinnati Reds     Gold Glove Award     Scott Richmond     Scott Rolen     Vernon Wells 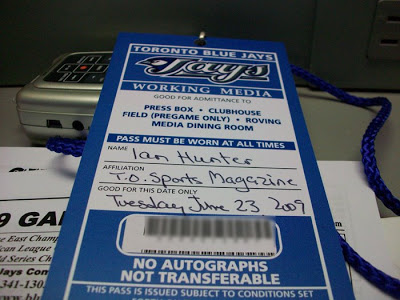 Blogging from behind the scenes at the Jays game 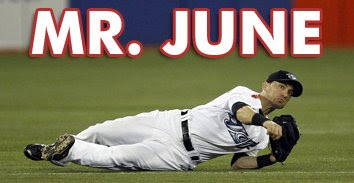