It may be a little presumptuous to declare this is a “make or break” series for the Blue Jays in the middle of May, but it almost is.

As the Blue Jays kick off a four-game set at Target Field in Minnesota this evening, they’re still licking their wounds after being swept by the Tampa Bay Rays and outscored 31-7.

Their manager is still on the sidelines. The starting pitching – which has been the saving grace of the club the past several weeks – has suddenly gone belly-up. And the lineup, which scored 891 runs last year, is barely hitting anything these days.

And that’s the most concerning part about the Blue Jays right now – their offense. The bullpen has experienced their fair share of struggles since Opening Day, but relief pitching was never viewed as a strength of this roster.

The starting rotation wasn’t expected to perform like one of the best in all of baseball. But the lineup was expected to be dominant … and it hasn’t been.

You’d think there’s nothing like facing off against the Minnesota Twins to cure what ails the Blue Jays right now. The Twins are tied with the Braves for the worst overall record in baseball, and their pitching staff is the worst in the American League with a 4.98 ERA.

Jose Bautista and Edwin Encarnacion have some of their best numbers at Target Field; a stadium they’ve transformed into a launching pad. Bautista has 11 career home runs in 17 games at Target Field and is slugging .913.

Encarnacion has six home runs in 19 games at Target Field and has a career slugging percentage of .588 in that ballpark.

In theory, the Blue Jays should pummel the Minnesota Twins in this four-game set. But I’m actually quite worried the Blue Jays may not. If the Jays can’t get their bats going this weekend in Minnesota against the Twins’ awful pitching staff, that’s a huge problem.

Overall, the Blue Jays’ starting pitching has been a pleasant surprise in 2016. Despite the lack of offense, Toronto’s starters have kept the Blue Jays in many games. But as the rotation unraveled, the Blue Jays had absolutely no hope in that series against the Rays.

Starting pitching may keep the Blue Jays in games, but the only way for them to win is to score runs … early and often, which they haven’t been doing.

The Twins are practically serving this series up on a silver platter as they’re parading out the following starters: Ervin Santana, Tyler Duffey (who the Blue Jays lit up for 6 runs in 2 innings last August), Pat Dean (a rookie left-hander making his first Major League start), and Phil Hughes (who has a 4.29 career ERA vs. Toronto).

I like the fact that the Blue Jays are shaking things up and batting Jose Bautista in the leadoff spot. At this point, they don’t really have anything to lose by adjusting the lineup.

Not to get all cynical here, but if the Blue Jays’ bats don’t wake up this series, there’s a very serious problem at hand. Even scarier … there isn’t an obvious way to repair the lineup, either.

It’s one thing for Troy Tulowitzki and Russell Martin to struggle, because they aren’t necessarily pillars of this Blue Jays lineup. It’s when the heart of the order struggles (in unison, I might add) that really starts to set off warning bells.

Aside from shuffling the deck, there really is no remedy to fix the flailing offense, either. Devon Travis may provide a bit of an uptick in offense at second base, but he won’t save the Blue Jays upon his return. And there aren’t exactly any prospects in the minor leagues begging to be called up.

So the solution lies within the players that are right in front of us. The Blue Jays will either slide further down into this rut, or they’ll triumphantly break out of this slump. Even though logic dictates the Blue Jays should crush the Twins this series, I’m very fearful of what might happen if the Blue Jays don’t. 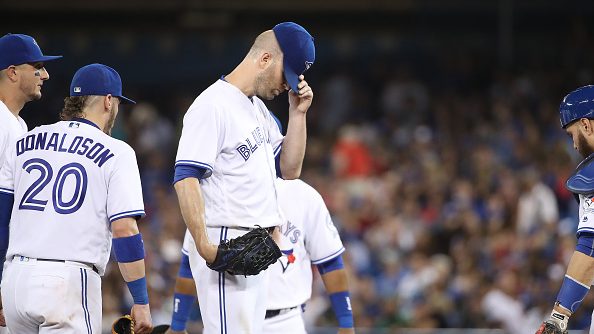 Devon Travis Is Doing It All for the Blue Jays