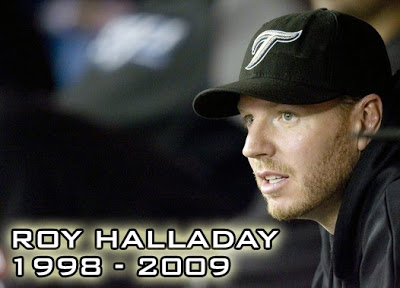 December 14th, 2009 will be forever remembered as the day that the Toronto Blue Jays parted ways with one of their greatest players in franchise history.

As I dry off my keyboard from the river of tears, rest assured that it’s not easy to see Roy Halladay traded to the Philadelphia Phillies in a reported three-team trade involving the Jays, Phils and Mariners.

The writing was on the wall for this deal since July, yet all the time in the world couldn’t prepare us for what was to happen today.

Just as Kevin Kaduk from Big League Stew said … it’s like the end of Marley and Me. Roy Halladay leaving the Blue Jays was inevitable, but sure doesn’t make things any easier.

The worst part of it all is that the man behind the curtain, Alex Anthopoulos, is not available to comment on these trade talks for the next few days. I realize that AA wants to get his facts straight and cross all the t’s and dot all the i’s before going public, but wouldn’t it be better to give the fans either a yes or no answer before heading into your Fortress of Solitude?

Come on Alex, it’s the least you could do after the biggest trade in the franchise’s history.

In the meantime, I will mourn the loss of the best pitcher in baseball and wish Doc his very best in his future endeavours. Suddenly, that June 25th Interleague weekend series against the Phillies at the Rogers Centre just became much more interesting. Even though it will be in a different uniform, I’ll look forward to seeing Halladay back in Toronto.

I wish no ill will towards Roy Halladay, and am certain he will see continued success with the Phillies carving up those hapless National League hitters.

At the end of all of this, when Doc has won another three Cy Young awards and is inducted into the Baseball Hall of Fame, I hope he looks back on his time in Toronto with fond memories … because I always will.

Regardless of which cap and jersey Roy Halladay will be wearing from here on out, as far as I’m concerned he will always be a member of the Toronto Blue Jays.

Start working on that “Level of Excellence” induction ceremony, boys.

Bothered by Buchholz and Defending Bautista

Shaun of the Red Sox 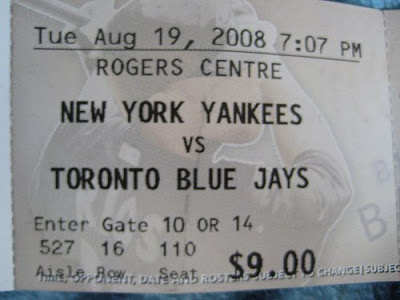 The cheap seats are still affordable