For the first time in just over a week, the Toronto Blue Jays no longer have sole possession of first place in the American League East.

It’s a strange feeling; sharing the division lead with the Boston Red Sox. And after dropping consecutive games to the Tampa Bay Rays, it may feel like the Blue Jays are scuffling right now. But the truth is, so is every other team in the division.

Really, this is the time of season where no lead in the division feels particularly safe. Every single game from hereon out feels like it could make or break (especially break) the Blue Jays season. But this is what meaningful baseball is September is supposed to feel like.

It’s hardly time to panic for Blue Jays fans, so as a bit of a diversion, here’s some Sunday morning reading to get you set for the series finale in Tampa Bay.

Joy Frank-Collins has a great interview with Jason Grilli over at Jays From the Couch. My favourite quote from Grilli in the piece: “I walk past the World Series trophies in the clubhouse every day and I just think, there’s got to be one more in there”.

This one kind of flew under the radar, but Jon Heyman writes at Today’s Knuckleball that he believes Jose Bautista, Edwin Encarnacion and Michael Saunders likely won’t re-sign with the Blue Jays. The Encarnacion and Bautista stuff isn’t really news, but the Saunders stuff is definitely a new development.

After the second half he’s having, I wouldn’t really blame the Blue Jays if they didn’t attempt to re-sign Michael Saunders. He seems to have returned to his career norms and may not even fetch a qualifying offer at this point.

Gideon Turk at BP Toronto dives into the struggles of Brett Cecil and why he’s struggling this year. I hate to write off Cecil because he’s been a solid part of the Blue Jays bullpen the past two seasons, but to me, he should be relegated to low leverage spots from hereon out.

George Poulis and Mike Frostad are two names you should become familiar with (if you haven’t already). They’re the team trainers that work tirelessly to keep the Blue Jays players on the field day-in and day-out. Brendan Kennedy has a feature on these two over the Toronto Star.

In case you haven’t watched it already, BarDown had Cabbie’s feature with the Blue Jays and the subject of gloves. Troy Tulowitzki talks about the untimely parting with his beloved gamer glove and Darwin Barney addresses the subject of “side gloves”.

Dioner Navarro is back in a Blue Jays uniform once again, and Stacey May Fowles at Blue Jays Nation shares why Navarro’s return brought her family a great deal of joy.

Over at Canadian Baseball Network, I wrote about the excitement and nervousness which is the official start of scoreboard watching season for Blue Jays Fans. 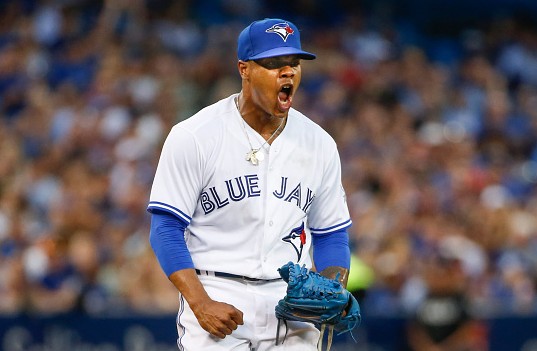