The Worrisome Back End of the Blue Jays’ Rotation

Up until about a few weeks ago, those five guys comprised one of the best starting rotations in all of baseball post All-Star break. In the month of August, Blue Jays starting pitchers owned a 3.12 ERA; good for third best in all of baseball.

The Blue Jays’ rotation was a point of contention for most of the first half, but those concerns were suddenly quelled after the acquisition of David Price and the improved performances by R.A. Dickey and Marco Estrada.

But as the calendar turned to September and thoughts have turned to October baseball, the Blue Jays’ once formidable starting rotation has now sprung a few leaks.

Now with Mark Buehrle dealing with an injury, Drew Hutchison back to his old can’t-pitch-to-save-his-life self and Marcus Stroman being thrown into the fire this Saturday against the Yankees, the back end of the Jays rotation has seemingly reverted back to it’s early-season incarnation.

Drew Hutchison’s poor start against the Red Sox last night was just the latest lackluster start from a Blue Jays starter, and it’s an issue that’s come to light all too often in September.

Last night marked the fourth time in six games in which a Blue Jays starter was unable to pitch more than five innings.

If we drill it down even further, Mark Buehrle has given up four or more earned runs in four of his last five starts. Drew Hutchison has surrendered 12 earned runs total in his past two starts combined.

Are these two starting pitchers the Blue Jays should really be giving the ball to right now?

When it comes to Mark Buehrle, his nagging shoulder is obviously a concern and the Blue Jays are hopeful he’ll still return to the starting rotation next week. But what happens if Buerhle comes back and he gets shelled again? Then where do the Blue Jays go?

It may have been a happy accident that Buehrle’s recovery from a cortisone shot prevented him from starting at Yankee Stadium; a park which has yet to win a game in nine career starts and a park where he owns a 6.22 ERA.

Buehrle’s play as of late has raised a lot of questions about his ability to not only perform down the stretch, but also his ability to potentially pitch in the postseason.

However, considering Mark Buehrle’s body of work over his 16 year career, perhaps the Blue Jays should give him the benefit of the doubt here. Even with a sore shoulder, one would believe Mark Buehrle’s leash is much longer than Drew Hutchison’s.

Then there’s Drew Hutchison, who if it were up to me, would not make another start for the Blue Jays the rest of this season. His home/road splits are something out of this world, but I don’t even know if I would trust Hutchison to make another start at the Rogers Centre, where he has a 2.91 ERA.

It’s remarkable to see how far Drew Hutchison has fallen since Opening Day; he was penciled in as the Blue Jays’ Opening Day starter and one of the clubs most promising arms, and here we are discussing whether he should even finish the season.

If I’m John Gibbons, I don’t start Drew Hutchison unless it’s absolutely necessary and if he’s facing a favourable opponent at the Rogers Centre. If he’s lined up to start on the road against the Orioles or even the Rays, then forget it.

We’re way beyond the point this season where Hutchison might suddenly “find it” again, and this is not the juncture where a team like the Blue Jays should take chances with their starting pitchers.

And it’s not like Drew Hutchison is barely squeaking by and managing to at least get through five or six innings. Hutchison has been a gas can on the mound, getting lit up in his last two starts.

Because of the question marks surrounding Mark Buehrle’s health status, the Blue Jays might not have a choice but to continue to let Hutchison pitch down the stretch; which is a frightening proposition for a team that’s trying to claim a division title.

And of course, I would be remiss if I didn’t mention Marcus Stroman. He will embark on what will be one of the most anticipated starts of the year for a Blue Jays pitcher (following a close second to David Price’s debut).

Stroman really will be thrown right into the thick of things in his very first start of 2015; a nationally televised game across the Fox network against a division rival in the heat of a pennant race. It also just so happens that Marcus will be pitching in his hometown as well.

But can Stroman transition seamlessly back into the starting rotation? Many believe that he will, but there is just so much pressure on Stroman to perform well on Saturday, that anything less than a stellar outing might be viewed as a disappointment.

Everyone surrounding the Blue Jays is hoping Marcus Stroman will pick up where he left off in late 2014, but considering the high profile opponent in the Yankees and a series against a division rival, perhaps there are some unfair expectations lauded upon Stroman.

It would be quite the story if Marcus Stroman ultimately had to carry the baton from his mentor Mark Buerhle and supplant him in the starting rotation, but it’s a scenario that could be very likely depending on how Saturday goes for Stroman and Tuesday goes for Buehrle.

The “Wait and See” Action Plan

For nearly six weeks since the All-Star break, the Blue Jays starting rotation was on complete cruise control; every starting pitcher (save for Drew Hutchison) was posting a quality start night after night, which played a huge part in the team’s complete turnaround in August.

But it’s been tough to watch some of the Blue Jays’ starters labour through innings here in September. The problem is these games are some of the most crucial of the season and it sucks seeing the Jays throw them away with poor performances like Hutchison’s from last night.

The only thing the Blue Jays can really do is take the “wait and see” approach. Marcus Stroman’s outing on Saturday will provide a lot of answers, as will Mark Buehrle’s pending return on Tuesday. If both show decent results, then consider Drew Hutchison all but eliminated from the starting rotation.

But if Stroman or Buehrle falter in their next few starts, Hutchison’s place in the starting rotation may be rendered safe by default. I think most would agree the upside is much greater by having Stroman or even Buehrle on the mound, but Hutchison is a healthy body.

Admittedly, a solid fourth or even fifth starter is a luxury that not many teams can afford. For many weeks, the Blue Jays had a pretty solid starting rotation from one through five. Now they’re being forced to push guys back, shuffle the rotation and even bring up Marcus Stroman.

With these games being important as ever, it’s crucial for the Blue Jays to give themselves the best chance of winning every single night from here on out.

If that means having Drew Hutchison ride the bench the rest of the way, so be it. If that means replacing Mark Buehrle with Marcus Stroman, so be it. Personal pride, records and statistics aside, it’s all about winning as a team now.

Ian Hunter
Ian has been writing about the Toronto Blue Jays since 2007. He enjoyed the tail-end of the Roy Halladay era and vividly remembers the Alex Rodriguez "mine" incident. He'll also retell the story of Game 5 of the 2015 ALDS to his kids for the next 20 years.
Tags : Drew Hutchison     Marcus Stroman     Mark Buehrle     starting rotation 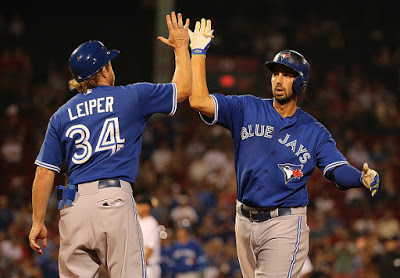