With many of their key hitters on the disabled list, it’s no surprise that the Toronto Blue Jays have struggled to score runs since the All-Star break. But one aspect of the team that has been surprisingly consistent is the starting rotation.

Going into Opening Day, the starting five was not without its warts. Back in January, I even went as far as to say the rotation was in pretty rough shape. And after failing to improve the rotation at all in the offseason, things looked pretty grim for 2014.

However, due to a number of factors, the rotation remained relatively consistent during the first few months of the season. Currently the Blue Jays starting staff owns the ninth best ERA in the American League at a respectable 3.99.

Many teams have the luxury of an ace to anchor their starting rotation, but the Blue Jays don’t really have a “stopper” in their arsenal the likes of Felix Hernandez, Clayton Kershaw or even Adam Wainwright.

Again, I say an “ace” is a luxury because while it’s great to have somebody like that in your starting rotation, they only pitch once every five days. The other four guys still have to take the ball those games in between.

And in order for any team to have a shot at the postseason, the entire starting rotation needs to be well-rounded. One thing I will say the Blue Jays rotation has is they have a good mixture of different types of starting pitchers.

Now it may be the long and grueling 162 game schedule and now the dog days of summer have finally arrived, but the Blue Jays’ starting rotation has been scuffling. Save for Marcus Stroman and possibly even J.A. Happ and R.A. Dickey, Toronto’s overall starting pitching has been on a steady decline.

A quick look at the comparables from the first two months of the season up against the June/July/August numbers paint a picture of an overall starting rotation that is trending downwards. 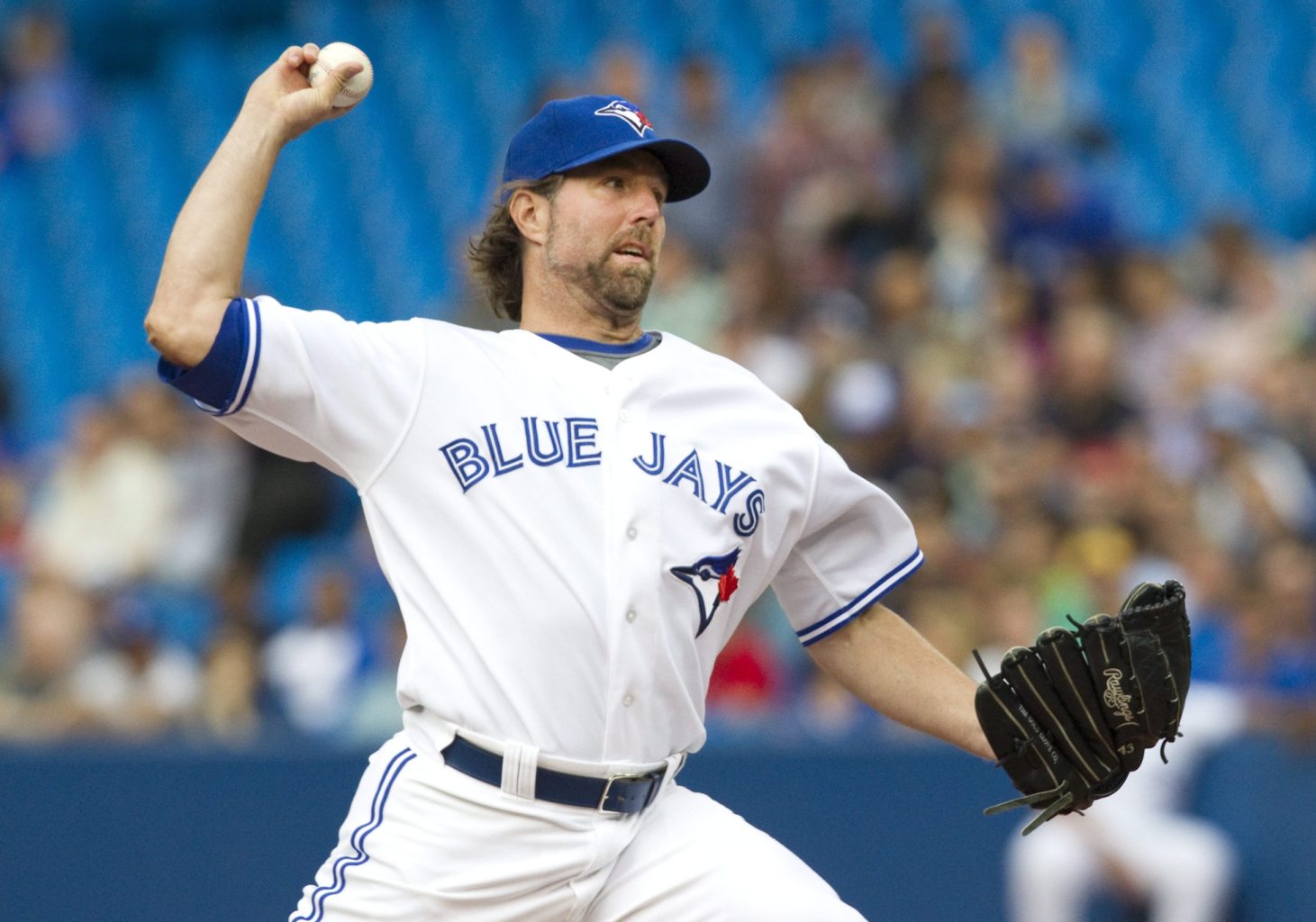 He may have been acquired at an ace-like price tag, but R.A. Dickey is settling more into the third or fourth starter’s role on this ball club.

For whatever reason, the seventh inning has been a huge hurdle for Dickey this season. His ERA skyrockets to 10.80 in the seventh inning and beyond, which has likely created an itchy trigger finger for John Gibbons once R.A. gets late into a game. 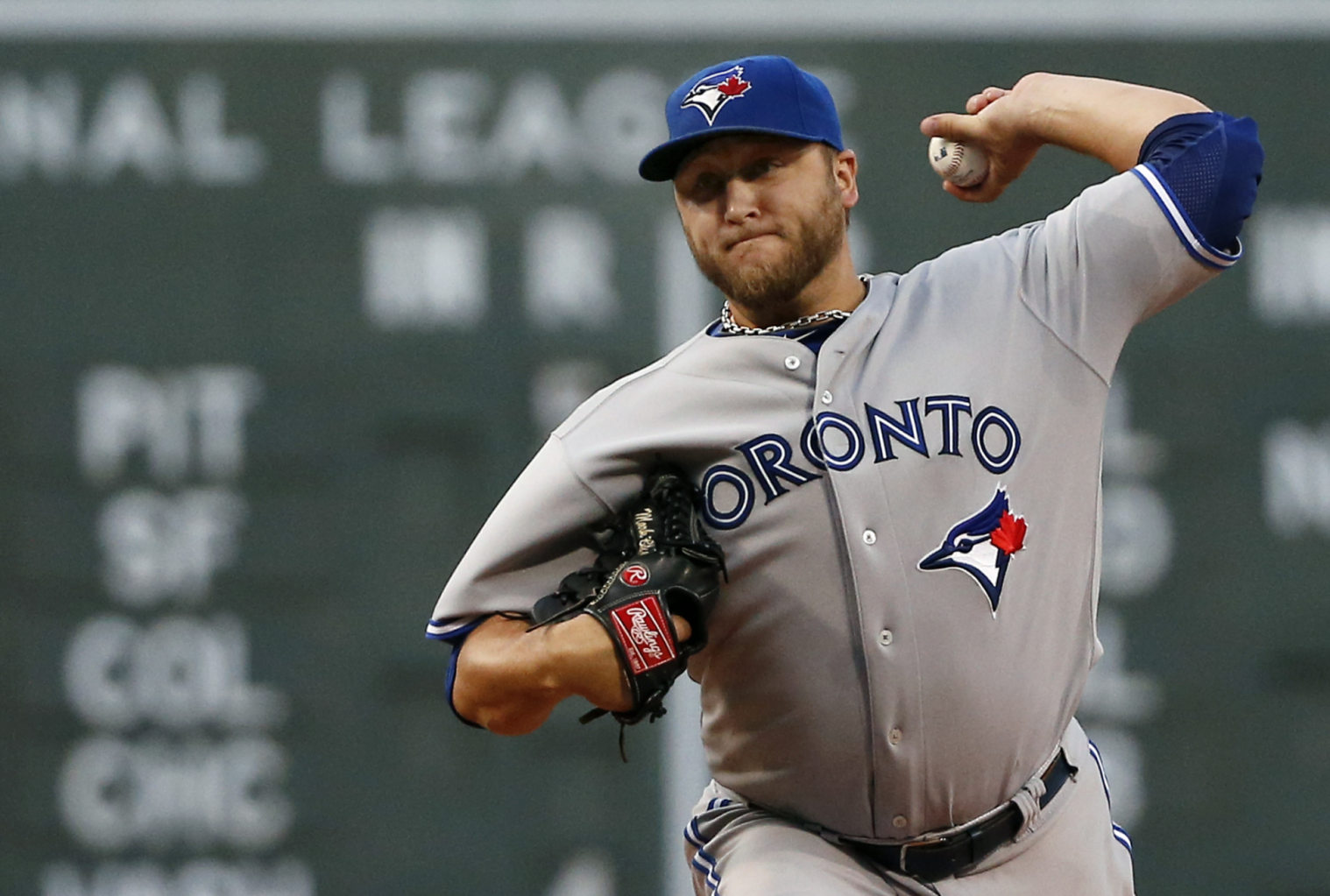 Mark Buehrle was the quoted “ace” of the Blue Jays staff the first half of the season, and to his credit he was one of the best starting pitchers in the league heading into the All-Star break. Most thought Buehrle was on the decline, and since then … he has been.

Despite a less than stellar second half, Buehrle’s ERA is still remarkably 3.31, and perhaps that’s because his worst outings of the season really haven’t been that incredibly bad.

Mark Buehrle is notoriously a pitch-to-contact pitcher, and I wonder if the deterioration of the Blue Jays defense has had some part in that. Come season’s end, Buehrle will likely still cross that 200 inning threshold and accomplish what he’s always done; eat up innings.

Again, Mark Buehrle is really more of a third or fourth starter, but because he was pitching so far above his career norms in the first half, perhaps expectations were set to high for the veteran lefty. 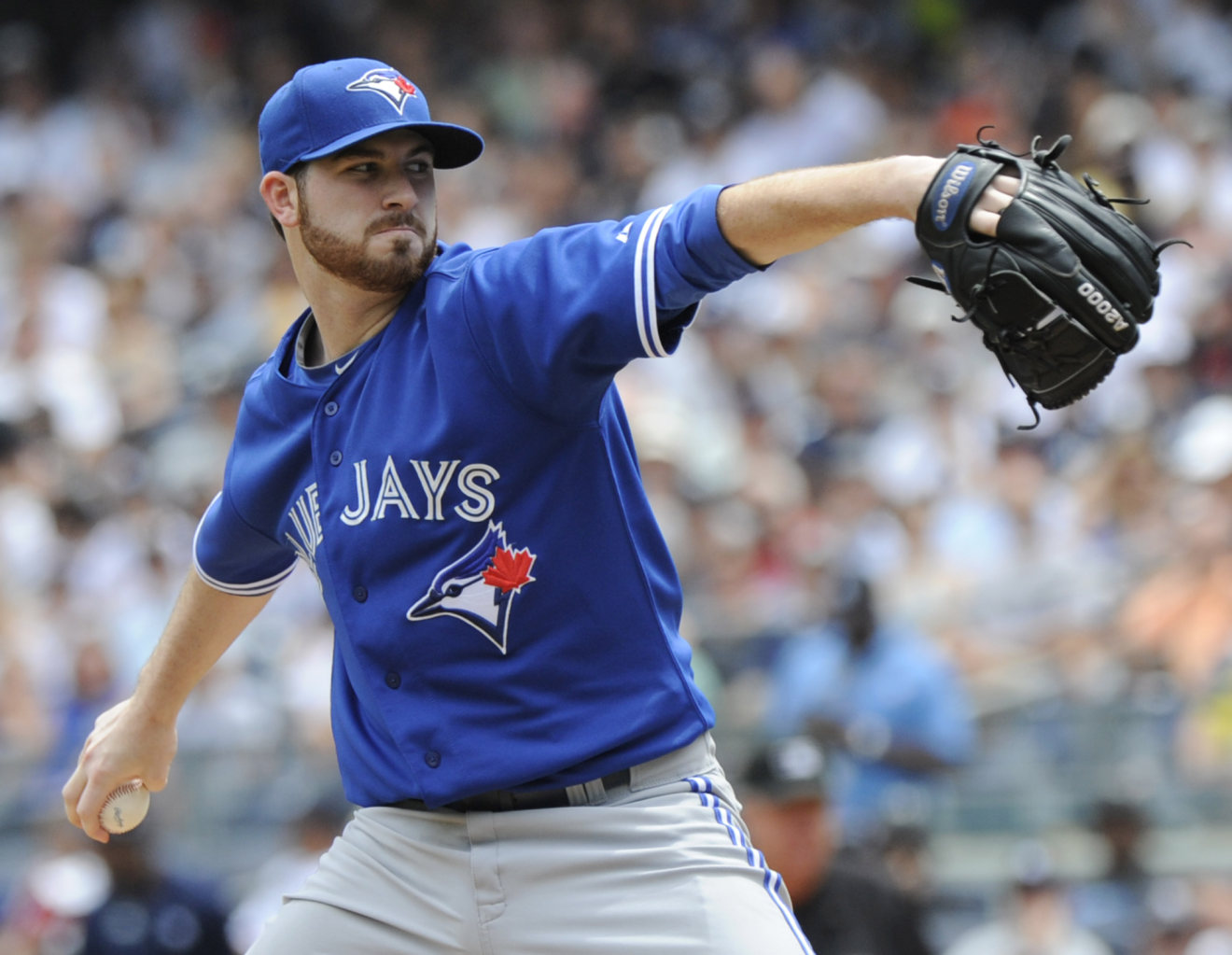 Drew Hutchison supplanted Brandon Morrow as the hard-throwing right-hander in the Blue Jays rotation, and it seems like he’s suffering from a similar ailment that plagued Morrow the past few seasons; the Jekyll/Hyde syndrome.

Brandon Morrow was guilty of having incredibly stark home and away splits, and Drew Hutchison has followed that trend this season. At times, Hutchison has matched the league’s best hurlers pitch-for-pitch; at others, Drew’s inexperience has been clearly evident.

Which means that every fifth day, the Blue Jays aren’t really quite sure which iteration of Drew they’re going to get that particular game; the good Drew or the bad Drew.

With all his upside, the potential is certainly there for Drew Hutchison to become a front of the line starter. But without any sort of consistency, one wonders whether he can be relied upon down the stretch if the Blue Jays are playing meaningful games in September. 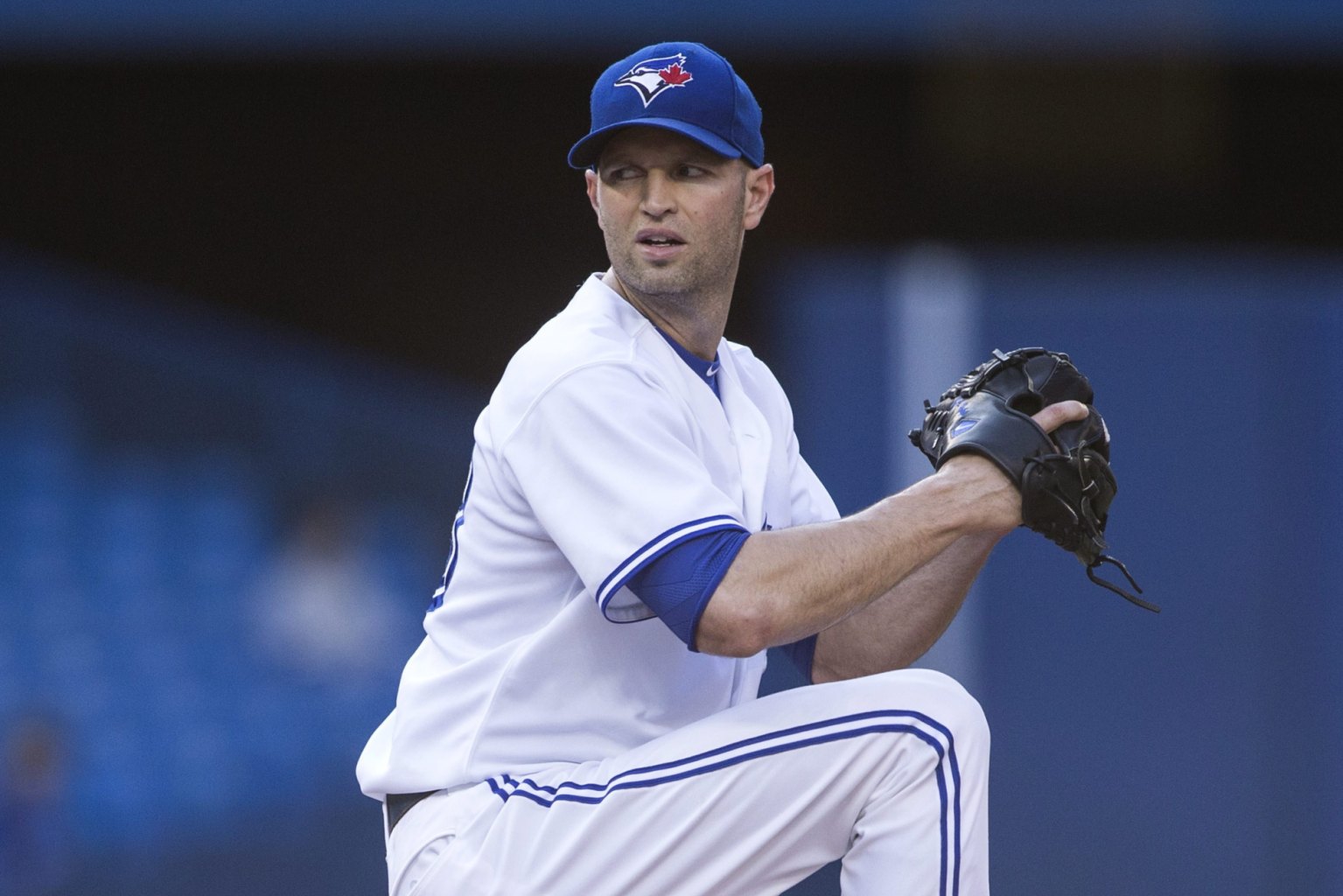 J.A. Happ is perhaps the most curious arm here out of the entire bunch. For whatever reason, Happ has experienced a recent surge of success which could be related to the sudden increase in velocity on his fastball.

Prior to last night’s start in Seattle, Happ was on a four game run in which he didn’t surrender more than two earned runs in each outing. Not to mention, he struck out a career high 12 batters in his second last start.

Happ has performed a tightrope act for most of his tenure as a Blue Jay, and while the results of his starts may be unpredictable, he’s a fairly suitable back-end starter that would be a welcome fit on virtually any team. You could certainly do worse than J.A. Happ. 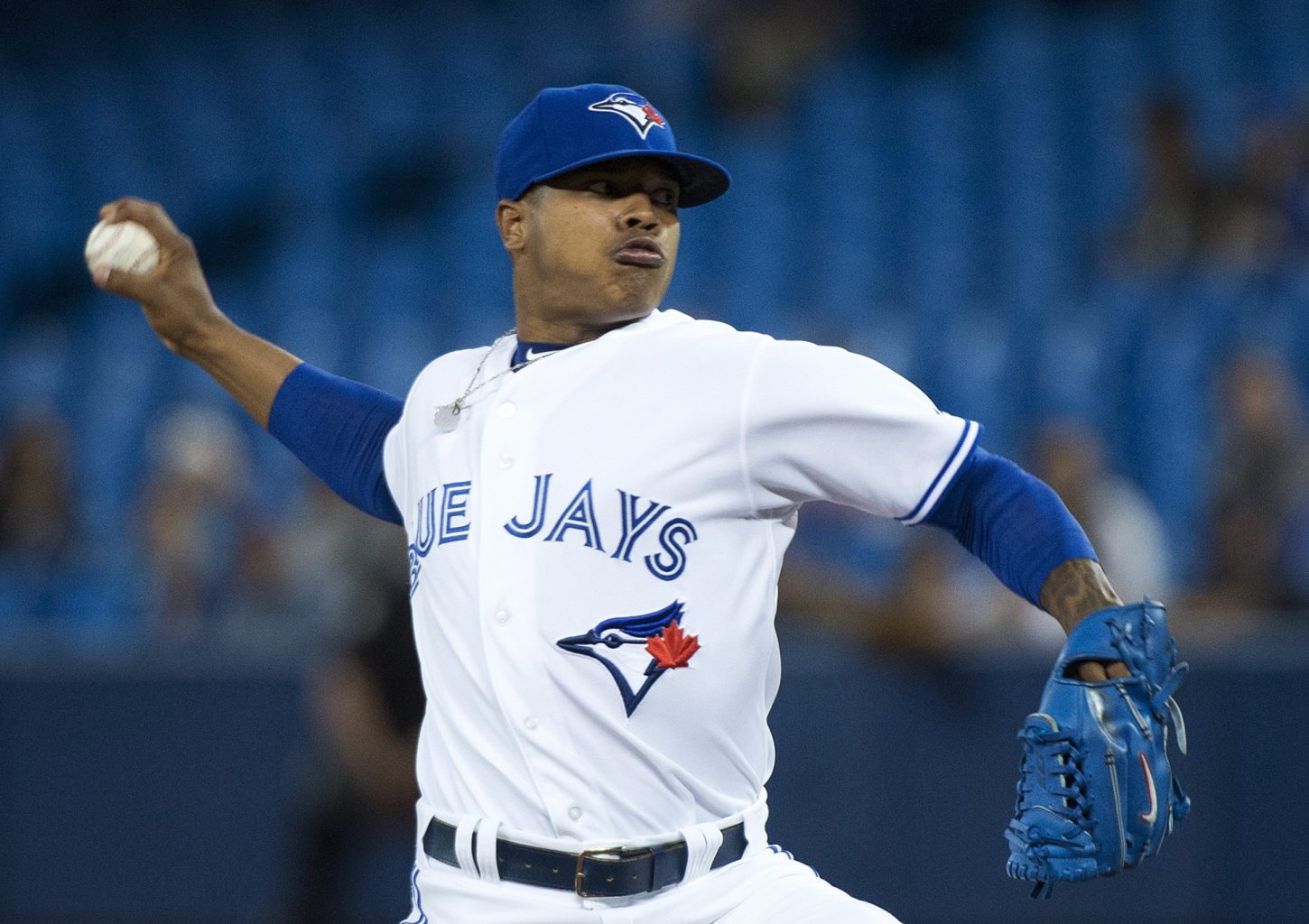 Marcus Stroman has quickly risen through the ranks to become arguably the Blue Jays best and most consistent starting pitcher. Of the 13 starts he’s made this season, Stroman has been great in all but three of them.

Moving Stroman into the starting rotation at the end of May was the best thing the Blue Jays could’ve done to shore up the starting five. Stroman has performed better than any trade deadline acquisition likely would have for the Blue Jays.

Although he’s pitching well beyond his years, Stroman is still a rookie; which means he is also a bit of a question mark. The main concern right now is his innings cap, and despite what Alex Anthopoulos has said, the Blue Jays are likely monitoring them closely.

If the Blue Jays had to choose one starting pitcher to head to the mound for a potential tiebreaker or Wild Card playoff game, one has to think the first choice would be Marcus Stroman. But again, can you trust a rookie when your season is on the line? I would.

Pitching in a high pressure situation like that would be a baptism by fire for Marcus Stroman, but he’s answered the call multiple times this season … so what’s one more?