Sometimes, the best laid plans go awry. For a number of reasons, on paper things should go one particular way, and yet they turn out a completely different way. Case in point: the 2013 Toronto Blue Jays.

If all these injuries and bad bounces took place within a vacuum, people would chalk it up to bad luck and move on. But this is not baseball within a bubble; this is baseball within the fourth largest city in North America.

So when things go wrong, people want answers. Fans want someone to be held accountable when their hometown Toronto Blue Jays completely collapse after being touted the World Series favourites in the offseason.

Moreover, people want a scapegoat; someone they can lay the blame on. Because blaming a faceless corporation isn’t nearly as satisfying. For those looking for a scapegoat as to why the 2013 season didn’t pan out, here are three options for who to blame it on.

When a season takes place such as this, the manager is often the sacrificial lamb. As unfair as it may be to peg a team’s misfortune on one single person, it’s quite often the right move. Sometimes it’s the only move.

The problem here is it isn’t simply a cut and dry situation where John Gibbons needs to be axed, as there are many outside factors at play here.

Gibbons himself really didn’t have all that much say in the players that were brought in during the offseason. For the most part, it was John Gibbons responsibility to supervise this collection of veterans and All-Star players and let them do most of the heavy lifting.

When many managers are first hired, they have at least some input on the type of players that the team brings into the organization. By all indications, John Gibbons did not have that luxury; this roster was already laid out for him.

Keep in mind that John Gibbons was hand-selected by Alex Anthopoulos to be the successor to John Farrell. So to turn around one year later and essentially admit defeat by firing Gibbons would look very bad on Anthopoulos.

At the same time though, people certainly want a scapegoat for a season gone awry. Letting go of John Gibbons would be the quickest and easiest solution to appeasing those fans. But now that Alex Anthopoulos reiterated John Gibbons is coming back to manage in 2014, that won’t be happening anytime soon.

And who’s to say under a new manager, the exact same thing wouldn’t happen next year as well? This is now two consecutive years with two completely different managers and yet eerily similar results on the field.

Some have commented that this Blue Jays team is not “fundamentally sound”. How exactly is John Gibbons supposed to remedy that? After spending several years learning the fundamentals in the minor leagues, shouldn’t they be complete players already?

In that particular vein, the fundamentals issue has very little to do with John Gibbons and much more to do with the players themselves and the on-field gaffes they have made.

People can blame John Gibbons all they want, but the fact remains one of the main reasons the Blue Jays are struggling right now is because Triple A players are being asked to fill the void of their Major League players.

If John Gibbons is the foreman on the job, Alex Anthopoulos would invariably be the architect. For the most part, he built this team by either acquiring these players via trade or signing free agents.

I’m not sure if I completely agree with the sentiment above, but there is some truth to that statement. Alex Anthopoulos is partially responsible for this mess.

Perhaps he was presumptuous to assume that a platoon of Emilio Bonifacio and Maicer Izturis at second base was going to work out. Maybe it was a stretch to think R.A. Dickey would transition well into the AL East.

Perhaps it was a pipe dream that Josh Johnson and Brandon Morrow would emerge as would-be aces in 2013. Maybe it was too trusting to think Melky Cabrera’s weary legs would survive 81 games on turf at the Rogers Centre.

These are all factors that have contributed to the downfall of the 2013 Blue Jays. And as the figurehead of the Blue Jays organization, AA should have at least entertained that these were all possibilities that could have happened.

As much as John Farrell is a despised figure in Toronto, I think he was partially correct with his assessment of the Blue Jays as a scouting-focused farm system rather than a player development farm system.

After all, Alex Anthopoulos’ background is in scouting as the former scouting director of the Blue Jays, in addition to some scouting experience in the Montreal Expos system.

This may not really pertain to the Major League level players that were acquired in the offseason, but more so to the players that have been brought up from the minor leagues. Also, the lack of high calibre talent in the minors that can be called up upon at a moment’s notice.

I think everyone was hoping the Blue Jays would churn out a bona fide stud pitching prospect, just like the Tampa Bay Rays seemingly do each year. But the Blue Jays unfortunately do not possess the ability to pull a pitcher from the minors and watch him flourish.

Maybe there really is something to be said about baseball’s most highly-touted and yet immeasurable statistic: chemistry. Perhaps Alex Anthopoulos underestimated these players’ ability to co-exist with each other after being brought in from a slew of other organizations.

Much like in fantasy baseball, I think AA assembled the best team possible on paper going into Opening Day. Numbers-wise, this Blue Jays team was projected to do great things. The 2013 Blue Jays proved they were not greater than the sum of their parts. 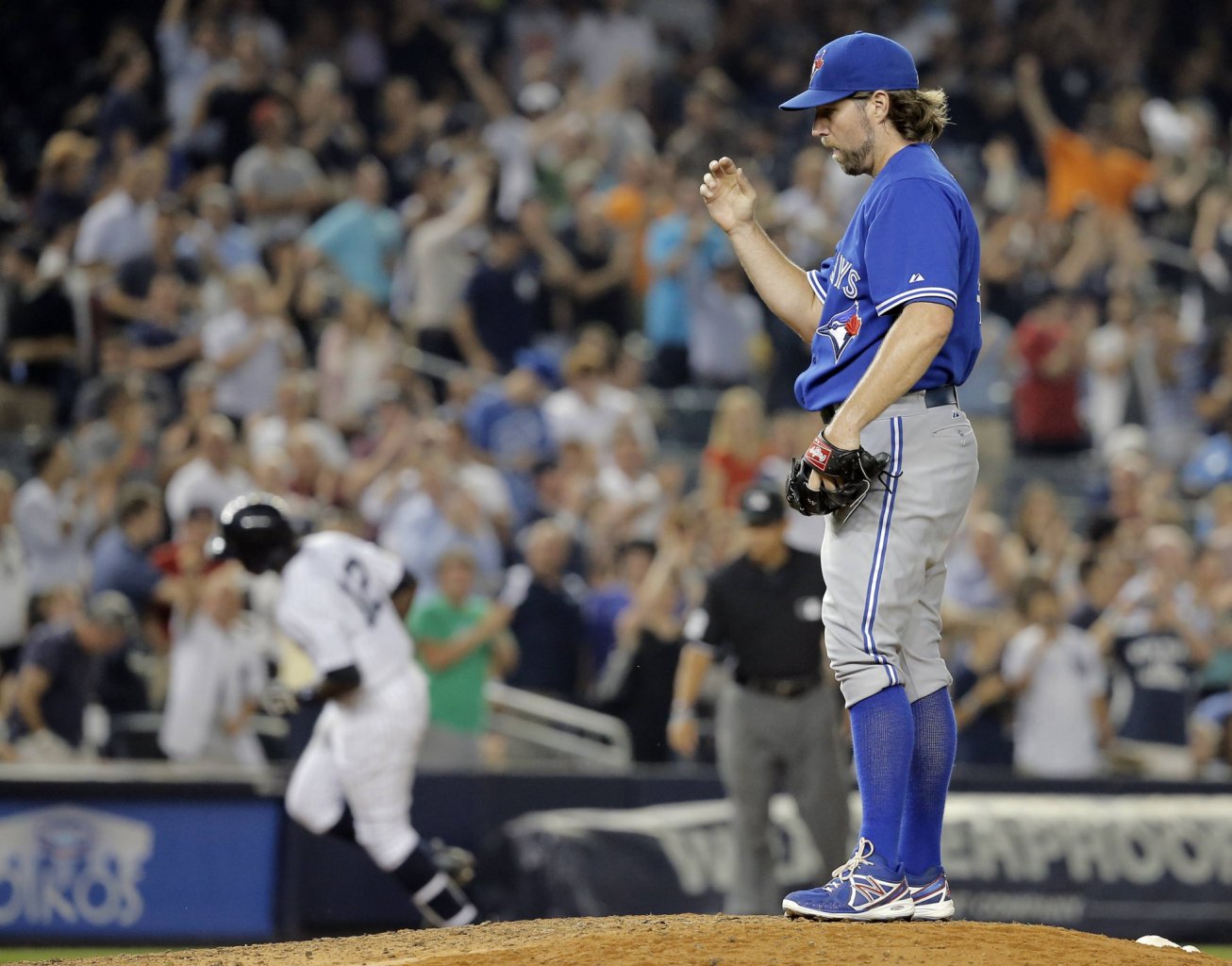 Here’s a crazy thought; maybe the reason why the Blue Jays have failed to live up to the lofty expectations is because they haven’t played that well. It’s also the most logical explanation … these 25 guys simply aren’t as good as we thought they were.

The inherent difficulty here is management can’t single out each player that failed to lay down a bunt or missed the cutoff man. Every single team makes errors and has blunders on the field. The difference is winning often covers up those mistakes.

There isn’t one single player that is the complete and utter embodiment of everything that went wrong for the Blue Jays. Although, a strong case could likely be made for Josh Johnson, R.A. Dickey and Emilio Bonifacio.

It’s difficult at this point in the season when so many players are on the disabled list, but these guys should still be held accountable for their actions on the field. To be honest, I’m tired of hearing R.A. Dickey’s excuses, I just want him to pitch better.

Specifically, I think a big portion of the Blue Jays struggles can be linked to the starting rotation and the lack of defense. The combination of those things have been the downfall of the 2013 Blue Jays.

Just point to the Blue Jays team ERA of 4.42 and starter’s ERA of 5.05 and you can easily see why they have struggled so much this season.

As we learned all too well in 2013, merely staying healthy is a skill in itself many of these players have yet to master. And if the starting rotation simply performed to status quo, who knows what their record would be.

A fledgling starting rotation has had its ill effects, as the bullpen has been taxed and overused since it has been asked to pick up a lot of innings. Failing to pitch five or even six innings taxes the bullpen and prevents the relievers from working on ample rest.

I’m not expecting someone like Jose Bautista to outright come out and say “yeah, we sucked this year”, but acknowledging this year didn’t pan out is the first step in ensuring a season like 2013 doesn’t happen again.

In the meantime, it’ll take a series of stiff drinks to forget this mess ever happened.
Make mine a triple, please.

7 thoughts on “Who is to Blame for the Blue Jays Demise?”