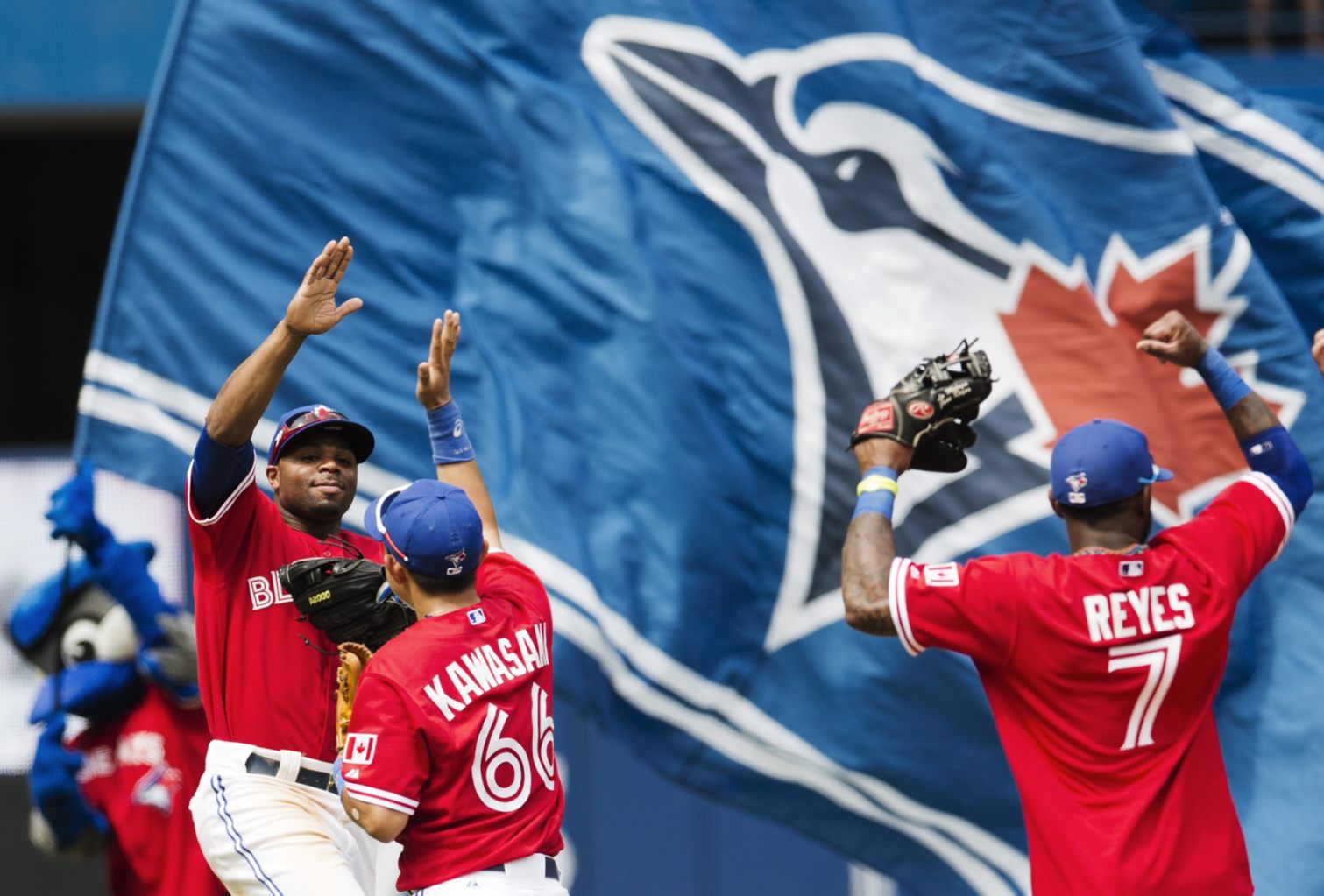 Last place in the American League East. 45-49 at the All-Star break. 11.5 games back of first place. Suffice it to say this was not how it was supposed to go down. This isn’t what was supposed to happen to the 2013 Toronto Blue Jays.

With the season more than halfway complete, many are looking for answers as to what went wrong with the Blue Jays in the first half. The truth is, it’s a number of things … but amongst the disappointments, there were also a few bright spots as well.

Whether it was the starting rotation, the bullpen, or even Munenori Kawasaki, there were many storylines that emerged from the first half of the season, but these ones stood out the most. 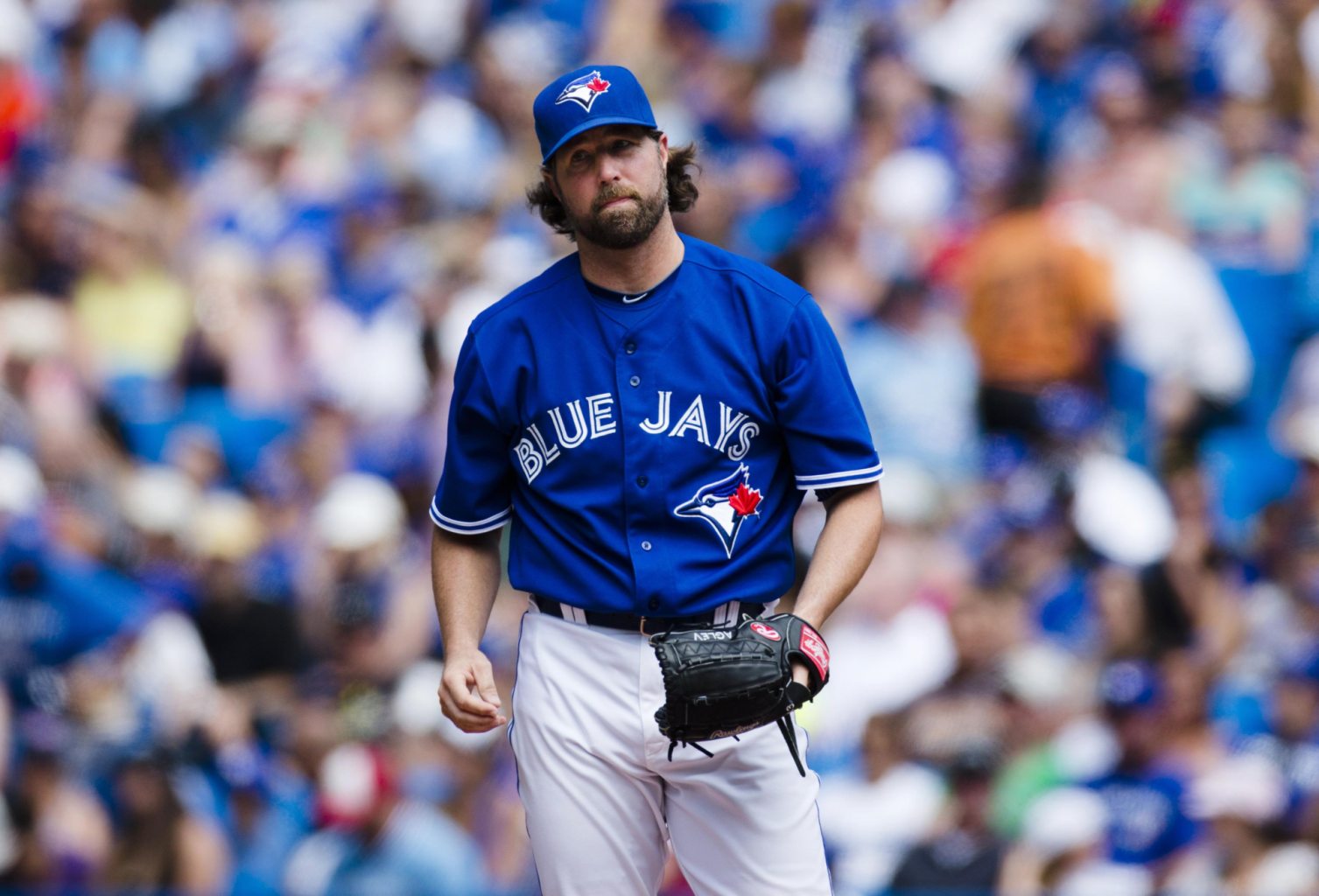 Going into Opening Day, the Blue Jays boasted one of the best starting rotations in all of baseball … on paper, at least. But within the first five weeks of the season, that piece of paper was scratched off, crumpled up, and run over about seven or eight times.

It’s baffling how starting pitching was thought to be a strong suit for the Blue Jays in 2013, and yet it’s arguably been the most disappointing aspect of the season to date. Even with the perceived depth in the minor leagues, the starting rotation was a virtual revolving door.

The first somewhat shocker of the season was that Ricky Romero would not be making the trip north from Spring Training, and instead J.A. Happ would supplant Romero as the fifth starter. Ricky would get the call however, but only for two very brief starts in May.

Of all the new acquisitions in the offseason, Mark Buehrle has surprisingly been the most consistent of the bunch in the starting rotation. R.A. Dickey has been hot and cold, the jury’s still out on Josh Johnson, Brandon Morrow has battled injuries, and J.A. Happ remains on the DL.

It’s odd how Esmil Rogers blossomed into a great starting pitcher, because his place in the starting rotation was born out of necessity. He was merely thought of as a spot starter and a short term solution.

But at this point, one can’t envision a scenario where the Blue Jays would ever want to take Esmil Rogers back out of the rotation. He has proved to be a valuable arm in what has been an otherwise disappointing starting rotation.

The Legend of Munenori Kawasaki 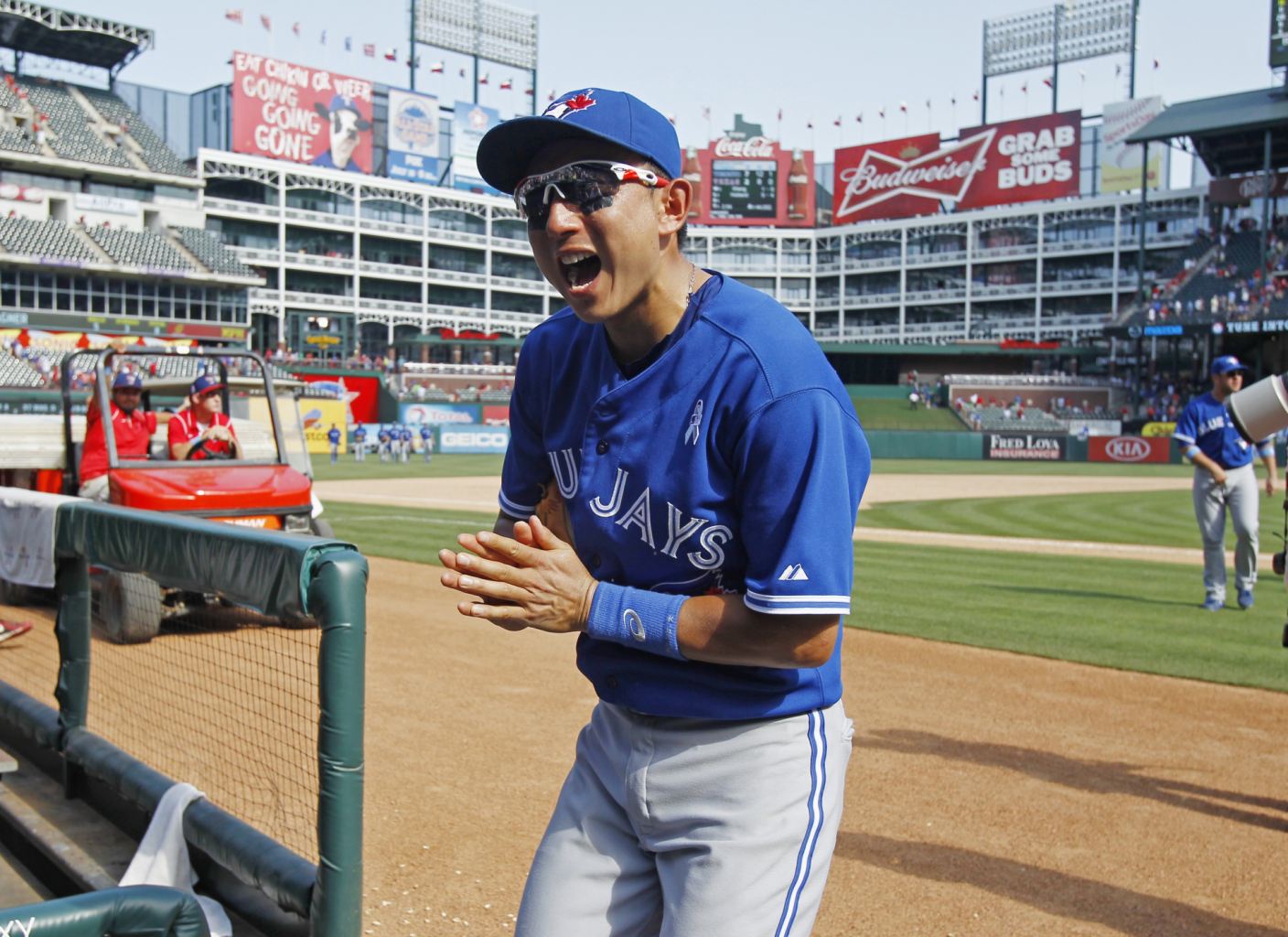 It was the postgame interview heard around the world; his name is Munenori Kawasaki. He is from Japan. He is Japanese. And not many people knew the name Munenori Kawasaki when the 2013 season began, but most of them certainly know who he is now.

Within a few days of being called up by the Blue Jays, Munenori Kawasaki became an overnight sensation. For some reason or another, his mannerisms captured the attention of Blue Jays fans everywhere.

Really, Kawasaki was brought in as a band-aid solution at shortstop while Jose Reyes was on the disabled list. And for a while, Kawasaki’s antics provided welcome distraction from what was otherwise a disappointing first half for the Blue Jays.

And it’s not as though Kawasaki was a liability on the roster on the absence of Jose Reyes, either. Munenori Kawasaki owned the sixth highest on base percentages on the roster, and his defense was adequate, whether it was at shortstop or second base.

I think a lot of fans gravitated towards Munenori Kawasaki because he embodied what the game of baseball should be all about: fun. There’s no question that every time he took the field or stepped into the batter’s box that he was absolutely having the time of his life.

A great deal about baseball is about highly-touted prospects, and young players coming up through the ranks and doing what they’re supposed to do. But then there are pleasant surprises like Munenori Kawasaki who bring some of that fun and unpredictability back into the game. 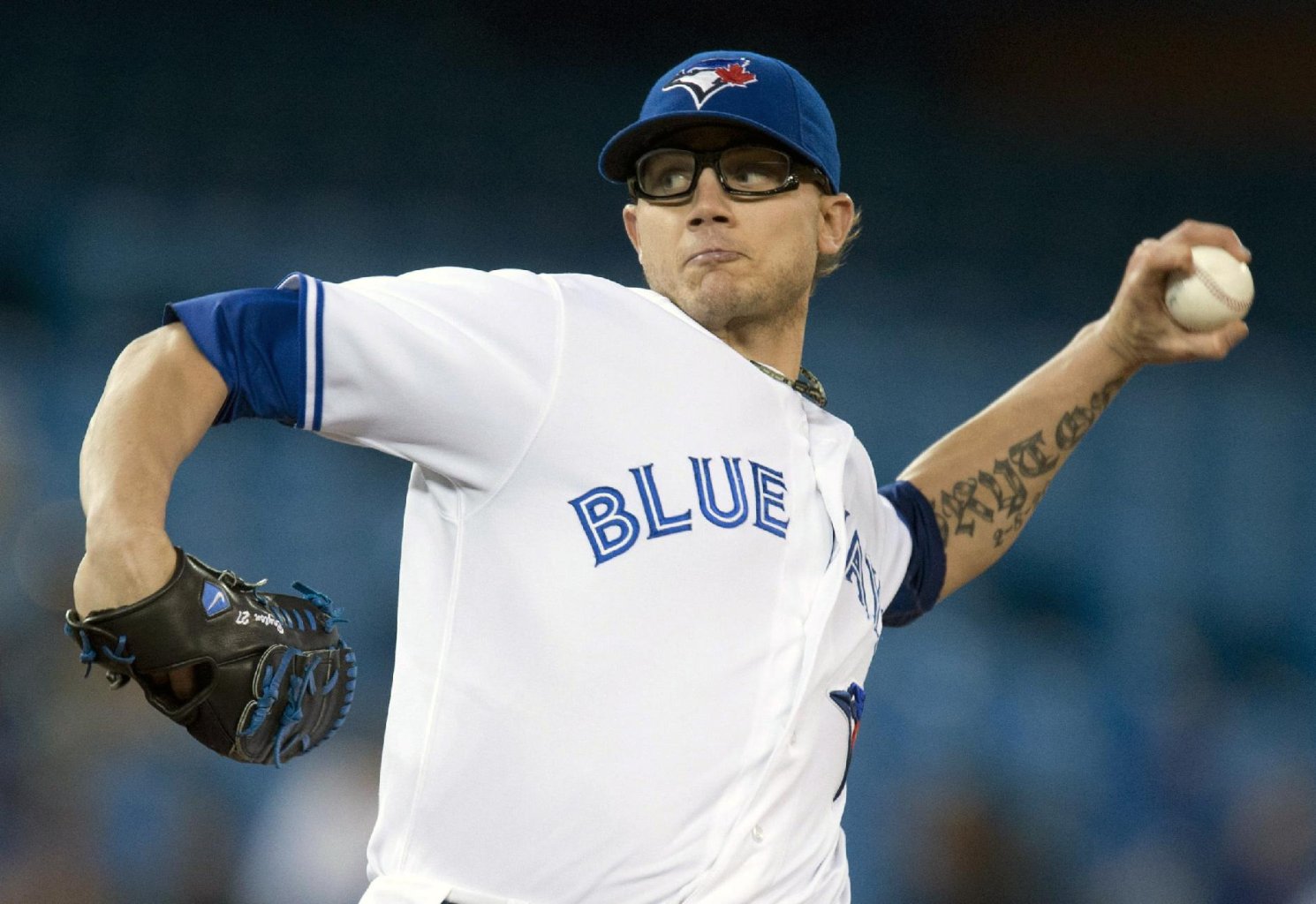 If someone told you at the start of the season that Brett Cecil and Steve Delabar would be going to the All-Star Game, they’d probably think you had a few too many $10 dollar tall cans at the Rogers Centre.

But lo and behold, the two Cinderella story relievers are in fact heading to the Midsummer Classic. Cecil and Delabar are just two pitchers in what has evolved into a dominant bullpen for the Blue Jays; one of the pleasant surprises for the club in the first half.

Here’s the true testament to the success of the Blue Jays bullpen, or at the very least, their late relievers; the Blue Jays are 33-0 when leading after seven innings. That’s right, they were undefeated in the first half when they had the lead late in the game.

Combined with Casey Janssen, Aaron Loup, Darren Oliver, Dustin McGowan, and newcomers Neil Wagner and Juan Perez, Toronto has boasted one of the more impressive collection of relievers in baseball.

One could argue that the reason why the bullpen has been so dominant is because John Gibbons, whose reputation as a bullpen savant precedes him, as managed to extract the most out of his relief corp; assigning proper roles and using his relievers in proper situations.

The weighted ball program may also have something to do with it, as Steve Delabar, Brett Cecil and Dustin McGowan are reaping the benefits of the program. In fact, the Blue Jays believe in the program so much that they hired Jamie Evans (the creator of the program), as a consultant to the team.

One Step Forward, Two Steps Back

If ever there was a mantra for the 2013 Blue Jays in the first half, this would be it; “one step forward, two steps back”. Just when it seemed like the Blue Jays started to gain any sort of momentum whatsoever, that’s when they would slide backwards.

For the first two months of the season, the Blue Jays slowly tumbled further and further down the standings, and at one point were a season-high 11 games under .500 back on May 11th.

But thanks to an incredible 11 game win streak in mid-June, the Blue Jays managed to vault themselves back above .500, and at one point were 3 games out of a playoff spot. At their high water mark on June 23rd, the Blue Jays were a season-high two games above .500.

However, true to the mantra, with that large step forward in mid-June, the Blue Jays took another two steps back. Since the win streak, they went 7-13 and own a 45-49 record going into the All-Star break.

Certainly not as bad as it could be, and not an insurmountable deficit for a team with this much talent on the roster, but it’s nowhere near the lofty expectations that were set in the offseason.

One could label injuries as the scapegoat for the Blue Jays first half disappointment, but really that excuse can be used for virtually any team. Heck, the New York Yankees are arguably a shell of a Major League team, and yet they’re still somehow seven games above .500. 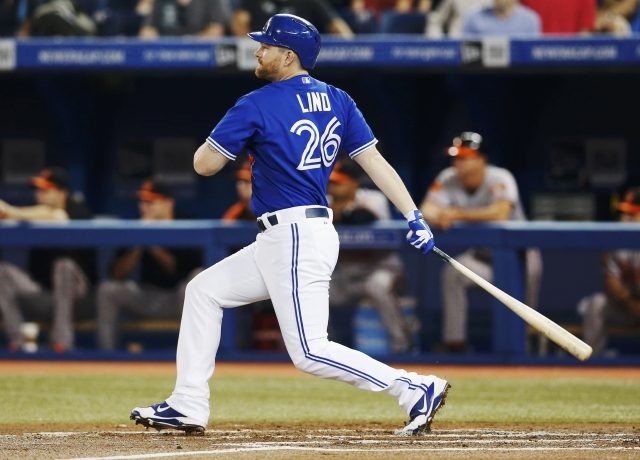 Like a phoenix emerging from the ashes, Adam Lind came back and enjoyed a new lease on life with the Blue Jays in the first half of 2013. However, Lind wasn’t the same player as he was back in 2009, he evolved into a much different animal this time around.

Adam Lind’s resurgence can be largely attributed to much better plate discipline this time around. Lind has started taking more pitches, and thus walking and getting on base more than he had in the past two previous seasons.

The power numbers may not necessarily be that of 2009, but Adam Lind has seemingly transformed into a singles specialist. He’s finding holes all over the infield, which may be a sign that his .306 batting average and .351 BABIP won’t be sustainable after the break. 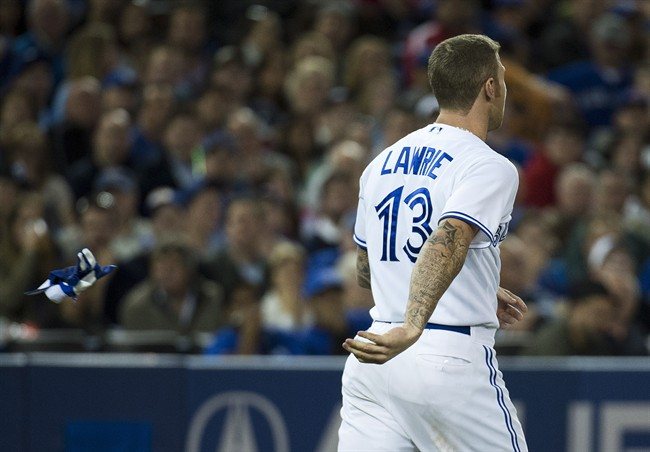 Much like the 2013 Toronto Blue Jays themselves, hopes were extremely high for Brett Lawrie to start the season. Many were expecting him to recapture some of that magic when Lawrie stormed onto the scene in late 2011.

But unfortunately, Lawrie struggled at the plate for the first two months of the season, and then an injury sidelined him for basically the rest of the first half. Perhaps the Blue Jays rushed Brett back to quickly in April, and his problems at the plate simply compounded themselves.

If the Blue Jays are going to be successful after the All-Star break and even in the foreseeable future, they are going to need Brett Lawrie to contribute. There is no question he’s impeccable with the glove, but in the first half, it was glaringly obvious Lawrie needed more work at the plate.

The latest development in the Brett Lawrie saga is that the Blue Jays have shifted him over to second base (at least in the meantime). It’s somewhat of a perplexing decision as it doesn’t really provide the Blue Jays a much better defensive figuration than before Lawrie went on the DL.

Colby Rasmus Comes Into His Own 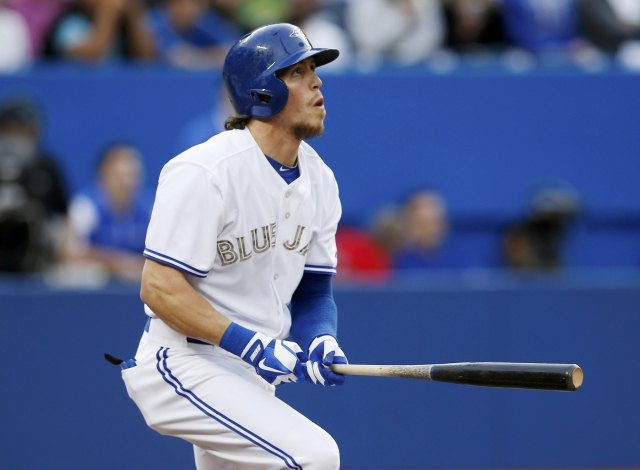 Here’s someone who nearly nobody’s talking about; Colby Rasmus. He’s very quietly having an impressive 2013 season and  on pace to set new career highs in home runs and RBI’.

It may be a few years later than expected, but Colby Rasmus appears to finally be coming into his own as the Blue Jays everyday centre fielder.

With the pressure off and the lack of mixed messages from his coaches, Colby Rasmus has blossomed into the player that everyone has been trumpeting for the past three years. Statistically speaking, Rasmus has actually been one of the best centre fielders in the AL.

The Emergence of Edwin Encarnacion 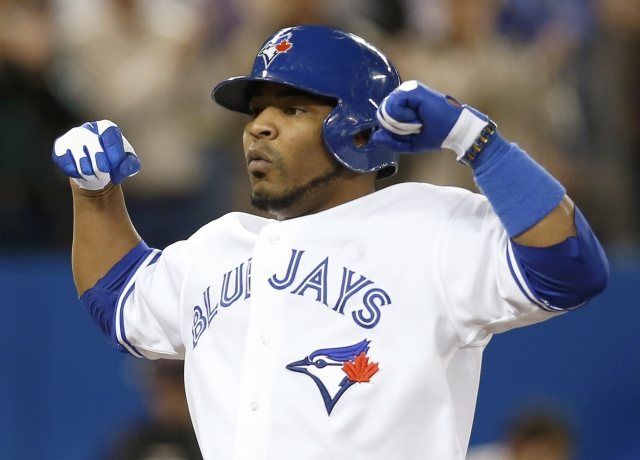 Edwin Encarnacion had a breakout year in 2012, but for most of his career, he’s been somewhat of an enigma. A player with all the tools to become a star player, and yet for some reason another, Encarnacion just wasn’t able to put it all together. That all changed in 2012.

Much like his counterpart Jose Bautista and his breakout 2010 campaign, there were many questions as to whether the 2012 season was a one-off for Edwin Encarnacion. But with his successful first half, EE has silenced most of those questions.

One could actually argue that Edwin Encarnacion has had a stronger first half than Jose Bautista, but both are deserving All-Stars and will represent the Blue Jays at the Midsummer Classic.

What does the Blue Jays Home Opener mean to you?

3 thoughts on “8 Storylines from the Blue Jays First Half”