Is it just me, or has the market for starting pitchers been especially crazy this off-season? And not just contracts delved out to free agent SP’s, I mean the market for selling starters as well.

It really has been a seller’s market these past few months. If the recent trades are any indication of what it takes to acquire an innings eater, I can fully understand why Alex Anthopoulos has been reluctant to give up the farm for a starting pitcher.

One name that has been constantly swirling around the Blue Jays blogosphere and Twitterverse has been Felix Hernandez. Sure, he could step in and immediately take the reins as the Blue Jays ace, but at what cost?

If the Nationals gave up their #3, #4 and #9 prospects just to get Gio Gonzalez, you can only imagine what kind of king’s ransom it’s going to take to pry Felix Hernandez away from the Mariners.

And that’s assuming that the Mariners are even considering offers for Felix, because all reports indicate that they’re not shopping him whatsoever. But one wonders how many more 60-something win seasons it’s going to take for the M’s GM Jack Zduriencik to change his tune.

So if it took four elite prospects for Gio Gonzalez, what can we expect in the way of a package deal for Felix Hernandez?

If we’re talking just prospects alone and no players with Major League experience, I think it takes at least five of them and maybe even six. We’re talking all your favourites: Travis d’Arnaud, Jake Marisnick and/or Anthony Gose, Daniel Norris, and others.

All of those guys would undoubtedly be high on the Mariners wish list. Conversely, if the Blue Jays included a few Major Leaguers, that would thin out the herd as far as prospects goes, but it would mean parting with someone like Brett Lawrie.

Now you can start to see the high price it would take to get Felix Hernandez. The Blue Jays would be getting one of the best starting pitchers in the game, but they’d have to clear the cupboard bare of their best talent to bring him to Toronto.

Not to mention, Felix is only signed for the next three seasons. So after the Blue Jays ship off their top prospects to Seattle, they could just be back at square one come 2015.

The same scenario can be applied if the Blue Jays wanted Matt Garza from the Chicago Cubs. If there’s any shed of truth to the rumours that Toronto is interested in Garza, it would still take a boatload of prospects or major league-ready talent to get him.

Garza is only under team control for two more seasons, and there’s also a danger he could walk away as as a free agent as well if he didn’t sign a contract extension.

To be honest, I’m not even all that crazy about Matt Garza anyway. Sure, he made a living as a Blue Jay killer there for a few seasons (2.14 ERA and a .236 OPP AVG), but I don’t think that makes him a trade target.

Another thing that doesn’t jive with the plan is neither Felix nor Garza have team-friendly contracts. Felix is set to make $58 million total over the next three seasons. Matt Garza is hitting his final two years of arbitration and his salary could jump to over $10 million a season.

There’s no question that both these starters have all the talent in the world and would slot in nicely to the Blue Jays starting rotation. But they’re the furthest thing from a bargain, and are receiving top-tier free agent money these next few seasons.

Starting pitchers are always a hot commodity, and for whatever reason an even hotter commodity this off-season. I think it’s because every team can always afford to upgrade their pitching and there’s always a need for innings eaters.

It would be great to watch Felix Hernandez take the mound every five games for the Blue Jays. Subsequently, that would mean not being able to see Anthony Gose play every day, or Travis d’Arnaud behind the plate, or even Kyle Drabek on the mound.

To me, that’s way too high a price to pay for one pitcher who would only be around for the next two or three seasons at minimum. Even if only one of the Blue Jays top five prospects pans out, having them under team control long term is worth more than any ace short term.

Ian Hunter
Ian has been writing about the Toronto Blue Jays since 2007. He enjoyed the tail-end of the Roy Halladay era and vividly remembers the Alex Rodriguez "mine" incident. He'll also retell the story of Game 5 of the 2015 ALDS to his kids for the next 20 years.
Tags : Felix Hernandez     Matt Garza     Seattle Mariners     starting pitchers 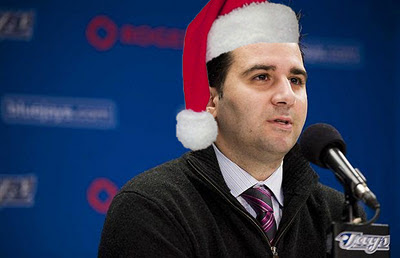