They had a combined 1424 games with the Toronto Blue Jays. With 14 seasons spent in the same uniform, they were the two longest tenured members of team. Now, Aaron Hill and John McDonald are Arizona Diamondbacks

Both Hill and McDonald will head to the desert with a chance at playing for a playoff spot, as the D-Backs attempt to hold off the Giants for the NL West title. Also, both guys will have the opportunity to be every day players.

The allure of playing in the post-season is something that the Blue Jays could not offer these past few years, and although both players are leaving the comfort of the team they’ve called home for the past seven seasons, at least they get to what they’ve always dreamed of; win a World Series.

As disappointing as it’s been to watch Aaron Hill fall from grace after his storybook 2009 season, it’s still a little disheartening to see a player who’s been with the Blue Jays for so long suddenly move on to another team.

I think both the Blue Jays and Aaron Hill sensed the writing was on the wall for him, and that his options were likely to be declined in the off-season. With his salary set to increase and his offense declining, the time was right to cut the cord.

Aaron Hill will land on his feet, and maybe he’ll even experience a resurgence out in the desert with the Diamondbacks. He’s still a great defensive second baseman, and at least the potential for power is there. If Arizona can somehow harness it again, it would bode well for their pennant race.

For me, losing John McDonald is the bigger blow than Aaron Hill being traded away. I was prepared that Hill was going to be gone by 2012 anyway, but in the back of my mind I felt like John McDonald was always going to be a Blue Jay … and might even retire with the team.

Johnny Mac was like the Obi-Wan Kenobi of the Blue Jays roster; he made the impossible look easy, and his experience and wealth of knowledge helped the players around him as well. I just assumed he would always back up the next up and coming shortstop, and pass his knowledge onto them.

His bat may have left something to be desired, but I’ll always remember John McDonald for his glove and his arm. He played the middle infield like nobody has with the Blue Jays for a very long time. His range and ability to turn every play into a highlight reel moment were always worth the price of admission.

Something that I thought was extremely classy of the Blue Jays organization was that they had both Aaron Hill and John McDonald speak at the press conference in which they announced they had been traded.

It’s not very often where you see outgoing players get a chance to say goodbye and reflect on their favourite memories with the team, as a love letter to fans so to speak. It was a great way to end Aaron Hill and John McDonald’s time (at least for now) with the Blue Jays.

The good news is there were several indications that Alex Anthopoulos had talked to both guys about the prospect of coming back next year. It didn’t seem like the prototypical empty breakup promise “let’s still stay friends”, it genuinely felt like John McDonald was convinced he was coming back to play for the Blue Jays next year.

Ultimately, this game is a business and the owners have to do what’s best for the team moving forward. But when Aaron Hill talked about how this organization was all he’s ever known, you really understood how much this team has been a part of these player’s lives for the past 7 years.

It’s been fun watching both Hill and McDonald blossom before our eyes; with Aaron Hill coming into his own as a starting second baseman, and John McDonald solidifying himself as an extremely talented fielder whose reputation will live forever in Blue Jays folklore.

I wish John McDonald and Aaron Hill all the best in Arizona, and hopefully they get that very much sought after taste of October baseball. And they’re back in a Blue Jays uniform next year, we’ll be sure to give them a warm welcome back home.

Ian Hunter
Ian has been writing about the Toronto Blue Jays since 2007. He enjoyed the tail-end of the Roy Halladay era and vividly remembers the Alex Rodriguez "mine" incident. He'll also retell the story of Game 5 of the 2015 ALDS to his kids for the next 20 years.
Tags : Aaron Hill     Alex Anthopoulos     John McDonald     trade
Previous post

AA Gets His Man: Kelly Johnson Traded to the Blue Jays 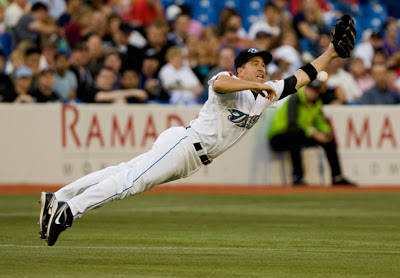