What the Blue Jays Gave Up to Get Colby Rasmus

To get talent, you have to give up talent … it’s just the cost of doing business. Try as you may, you can’t trade a bag of baseballs for a top tier player.

In order to acquire a superstar in the making like Colby Rasmus, the Toronto Blue Jays were going to have to give up some good players to get him. They did unload a lot of players yesterday, but ultimately I think what they got back in return outweighed what they gave up.

In no particular order are my thoughts on each departing Blue Jay involved in the trades to Chicago and St. Louis:

Jason Frasor: the Sausage King was grossly underrated and was one of my favourite relievers to watch. I don’t doubt that his success will continue in the AL Central this year within a White Sox bullpen that was in desperate need of a stable relief arm.

I can see the White Sox picking up Frasor’s option or maybe another team locking him up to a multi-year contract in the off-season because that seemed to be the trend this past winter with middle to late relievers. Jason Frasor deserves that stability, and I don’t think the Blue Jays could have given that to him.

In listening to an interviews a few weeks back after Frasor set the new record for Blue Jays appearances, I got the sense that he knew the writing was on the wall. He just sounded like a man that knew he was on the move.

Maybe it was pitching for nearly eight seasons in the quiet confines of Toronto that made Jason Frasor so unheralded and underrated around the league. Year in and year out, Frasor was good at what he did, and he made a good living doing it.

John Farrell will miss Dotel’s effectiveness against right-handers, but let’s be honest … Octavio Dotel was just a rental player. At best, the Blue Jays may have turned him into a Type B free agent, but there was no guarantee Dotel would have declined arbitration anyway.

Marc Rzepczynski on the other hand, is a diamond in the rough. Like the gents in Camp Rzepczynski over at GRoF, I believe Zep still has the potential to be a great starting pitcher. I like how the Blue Jays moved him to the bullpen this year, but maybe he’s better served going back into the rotation in St. Louis.

Rzepczynski never really got a fair shake to get a full season of starts under his belt, and his ceiling is the highest of all the players going to the Cardinals in this trade. With just over one year of service time under his belt, he’s under team control for another five seasons.

Ultimately, relievers are a dime a dozen and very easy to replace; which is why the Blue Jays could afford to trade Dotel and Rzepczynski. As Alex Anthopoulos proved in the off-season, holes in the bullpen can be easily filled with leftover arms.

Using that strategy may not prove to build the best bullpen in the majors, but one can certainly construct a perfectly competent relief corp with talent from the farm system and a couple of free agent signings.

Corey Patterson: the fact that Alex Anthopoulos managed to package him in a deal blows my mind. Patterson came to Blue Jays camp on a minor league contract, and yet the Blue Jays parlayed him with 3 other players to get Colby Rasmus.

With Scott Podsednik favoured to be the fourth outfielder going into Spring Training, it was a miracle in itself that a career journeyman like Corey Patterson cracked the 25-man roster anyway. Patterson had a great May, but had cooled off considerably and his baserunning and defense left something to be desired.

With Brett Lawrie knocking at the door, I just assumed the Blue Jays were going to designate Corey Patterson for assignment in the next few weeks or so to make room for Lawrie. However, AA built up Patterson’s value and turned him into a trade chip.

Zach Stewart: this is the one I fear that might come back to bite the Blue Jays. We saw a glimpse of what Zach Stewart could do at the big league level earlier this year, and he wasn’t overwhelming … but then again it was only three starts.

Even though he did pitch in the majors this year, Zach Stewart is currently just a prospect. It’s always a crapshoot with young guys, and even the most highly touted prospects don’t always pan out. At best, Stewart was projected to be a #2 or #3 starter anyway.

We won’t know for maybe 5-10 years whether Zach Stewart will come as advertised. Who knows, maybe he will become a solid starter for the White Sox, or perhaps he becomes something even better than that. Stewart’s ceiling is high, but so are many other pitching prospects the Blue Jays have.

In conclusion: the Blue Jays did pay a hefty price to bring in Colby Rasmus (and others), but one could argue the only two trade chips they’ll really miss are Marc Rzepczynski and Zach Stewart. All the others were expendable and can be easily replaced.

Parlaying relief pitching into position players always seems like a very good strategy as General Manager, as everyday players can have a much bigger impact on the team than bullpen arms or even starting pitchers.

I really like this trade for the Blue Jays, and even if Colby Rasmus doesn’t blossom into the superstar that everybody hopes he will, having a solid centre fielder helps shore up the position for at least another three more years.

The bullpen can be replenished with a couple of guys that are coming back from the Cardinals, and in the meantime guys like Luis Perez, Wil Ledezma and Danny Farquhar could become bullpen staples for the Blue Jays moving forward.

What this trade really signals is that the Blue Jays want to be contenders sooner rather than later. Perhaps the timetable is being moved up a couple years for Toronto to be a playoff contender.

Ian Hunter
Ian has been writing about the Toronto Blue Jays since 2007. He enjoyed the tail-end of the Roy Halladay era and vividly remembers the Alex Rodriguez "mine" incident. He'll also retell the story of Game 5 of the 2015 ALDS to his kids for the next 20 years.
Tags : Colby Rasmus     Corey Patterson     Jason Frasor     Marc Rzepczynski     Octavio Dotel     trade     trade deadline     Zach Stewart
Previous post 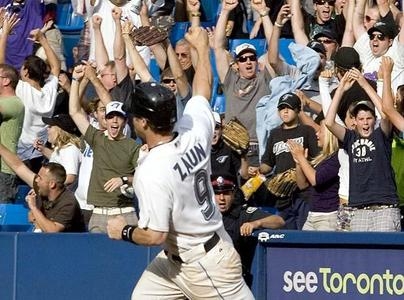