The Subtle Differences Between a Pop-Up and a Grand Slam

I don’t claim to be a physicist or anything, but I think it’s safe to say there’s a big difference between a pop fly and a home run.

I had a bit of a chuckle watching the replay from Adam Lind’s grand slam and couldn’t help but notice Nathan Adlock was convinced it was a pop-up when it was obviously otherwise.

Also judging by the positioning of the fielders immediately after the ball was hit, I’m pretty sure everyone at Kaufman Stadium knew that was a home run … except for Nathan Adlock. His initial reaction is priceless:

As for explanations as to why Adlock would be pointing upwards signalling a pop fly, there were several suggestions in Twitter. The Ack and @James_In_TO said Adlock was warning folks in the bleachers of a incoming souvenir home run ball.

@WarrenMichaelDL said perhaps Adlock was pointing towards his launch angle or he was asking the lord and savior for help. @katitis1 thought Nathan Adlock was using the force to help bring the ball back.

All of these are very suitable explanations as to why Nathan Adlock thought the ball was an easy out, but the short of it is I think he and the Kansas City Royals learned the hard way not to intentionally walk Jose Bautista to get to Adam Lind.

Ian Hunter
Ian has been writing about the Toronto Blue Jays since 2007. He enjoyed the tail-end of the Roy Halladay era and vividly remembers the Alex Rodriguez "mine" incident. He'll also retell the story of Game 5 of the 2015 ALDS to his kids for the next 20 years.
Tags : Adam Lind     grand slam     Kansas City Royals
Previous post 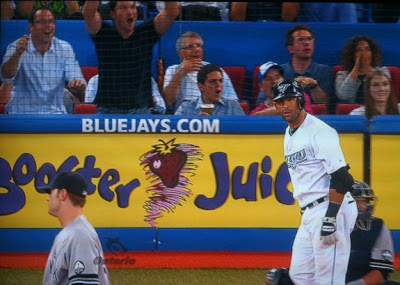