Gone Away is the New Bird, Here to Stay is the Old Bird

I’ve long suspected the Blue Jays might be changing their logos and uniforms, and now what’s old might be new once again in Blue Jay land.

If you haven’t already, make sure you check out Chris from Infield Fly’s series of posts on the state of the uniforms (“Cheering for Laundry” and “Where’s the Blue?“)

I think Chris was really onto something, because Bob McCown made a comment last night on Primetime Sports about the possibility of the retro logo and uniforms making a full time return in 2012. (hat tip to @MrWenn for catching it.

“I am led to believe that if you like this current jersey, you better go get one. Because this time next year, they won’t be available. I think they’re going to go back to the original ones.”

Now this might all be here say that McCown overheard in the luxury box at the Home Opener, but I don’t think he’s very far off base with his suspicion that a logo and uniform change may be in the works.

So it came as no surprise when Uni Watch reported last week that the Blue Jays are dropping the powder blue uniforms. Frankly, people either loved them or hated them; there didn’t seem to be any middle ground on the powder blues.

So does this pave the way for the Blue Jays to return to their original logo and uniforms? In this humble blogger’s incredibly speculative baseless opinion, yes.

Many share the sentiment that a team called the “Blue Jays” should really have some semblance of the colour blue in the uniform. Reverting back to the original home whites, road greys and alternate blues would certainly fill that requirement.

Visions of the championship winning teams wearing these uniforms are instilled in our memories, and thus could conjure up a lot of great memories for fans when they watch their favourite players in the retro jerseys.

The flaw in this all is it doesn’t quite jive with the movement of the team trying to move away from events like Flashback Fridays, the Back2Back Reunion and everything looking backwards rather than towards the future.

I agree there’s no sense in living in the past. However, to truly understand where you’re going, you have to know where you’ve been. There definitely does need to be an appreciation for the Blue Jays teams who wore those uniforms.

In the land of logos, this is the eighth year in which the Blue Jays have used their current logo or “angry bird” as Stephen Brunt referred to it as. Eight years is a long time to stick with a logo and uniform that fans aren’t all that crazy about.

I’m not an expert when it comes to creating logos for professional sports teams, but one has to think that the classic look is much more sustainable than a modern look. Ironically, the modern look becomes dated very quickly.

Sticking with a clean, classic logo is the way to go. In my opinion, it looks much sharper. In the Blue Jays case, that old bird is so iconic that it only makes sense to switch back to that logo.

Let me reiterate that this is all just speculation on Bob McCown’s and my part, but one has to suspect that something is happening behind the curtain if the powder blues are being dropped by the Blue Jays.

Maybe the perfect solution in all of this is to combine the old with the new. Here’s a little something I came up with below. What do you guys think?

Thanks to Chris from Infield Fly for the links and Chris Creamer’s Sports Logos for the logos and links to the uniforms.

Ian Hunter
Ian has been writing about the Toronto Blue Jays since 2007. He enjoyed the tail-end of the Roy Halladay era and vividly remembers the Alex Rodriguez "mine" incident. He'll also retell the story of Game 5 of the 2015 ALDS to his kids for the next 20 years.
Tags : Blue Jays logos     uniforms 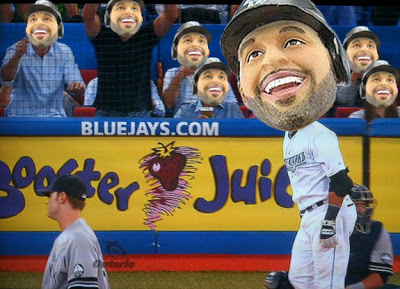