What a difference one year makes

As I was sitting in the stands at the Rogers Centre last night with the Blue Jays down by a run in the bottom of the ninth, I couldn’t help but think how drastically things have changed compared to one year ago.

For one, people were on their feet cheering for Vernon Wells saying “Let’s go Vernon” … something I honestly thought I would ever hear at the Rogers Centre. Now, Wells may have struck out to end the game but if there’s anybody I’d want to have in that particular situation, it’s definitiely Vernon Wells.

Also, the Blue Jays were so kind to give me a Vernon Wells autographed ball during their Tweeting Tuesday event, which by the way I think is a great idea to get the fans interacting in the game. The only problem is I find myself staring more often at my phone then what’s going on down at field level.

One year ago, if someone offered me a Vernon Wells autographed ball, I honestly don’t know if I’d take it – that’s how much things have changed in a year.

Another side note, I had a chance to talk to Megan Robinson of the Blue Jays and her Triple Play blog, which was very cool as well. Make sure you read up on her stuff because it’s a very detailed and in depth look about what goes in behind the scenes at the Blue Jays, as well as some great anecdotes.

I couldn’t agree more with eyebleaf that the Hill and Lind this year are impostors. The only possible explanation is that it’s actually Kevin Mench and Brad Wilkerson out there wearing Aaron Hill and Adam Lind suits.

However, as much as things change from year to year, the more they stay the same. Starting pitching has been a staple of the Toronto Blue Jays, and even after the departure of Roy Halladay the starting staff really hasn’t really missed a beat.

For all the things that have gone wrong with the Blue Jays this year, there have been an equal amount of pleasant surprises that not many people could have foreseen. So in my mind, it all evens out in the end.

But like my optimistic friend eyebleaf, we’re just waiting for that magical season where a marriage of pitching, hitting, defense and coaching can come together in perfect harmony, and we can finally scream … playoffs!

Ian Hunter
Ian has been writing about the Toronto Blue Jays since 2007. He enjoyed the tail-end of the Roy Halladay era and vividly remembers the Alex Rodriguez "mine" incident. He'll also retell the story of Game 5 of the 2015 ALDS to his kids for the next 20 years.
Tags : Aaron Hill     Adam Lind     Vernon Wells 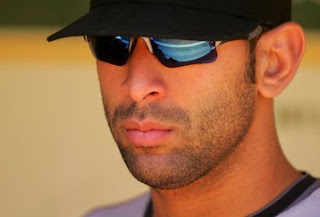 Now THAT is how you play the game