It may not have seemed possible, but day two of contract extension rumours surrounding Jose Bautista were somehow more explosive than the first.

Jose Bautista fired the first shot on Monday morning saying he didn’t want to negotiate. Then on Tuesday, the front office comes back and doesn’t really retort … in so many ways, but they did.

Then Rick Westhead’s report surfaced that Jose Bautista’s magic number is five years and $150 million dollars, and Shi Davidi’s counter saying that report was “false”. Now, we’re hearing from Jon Heyman and others that Bautista’s ask might even be north of $150 million.

Just two days into Spring Training, and this has all transpired within the span of only 48 hours. If this is any indication how this season is going to play out, 2016 is going to be a crazy year for the Toronto Blue Jays.

If there’s one thing I’ve learned over the past few days with all these revelations, it’s that Jose Bautista is very quickly pricing himself out of Toronto. Even if many of these reports are unfounded and inaccurate, he may have already sealed his ticket out of Toronto.

As much as I adore Jose Bautista the player, signing him to a five year deal (or even longer) has potential to go sideways very quickly. The truth is, the Blue Jays would likely get some value in the first few years of that deal, but at the back end of that contract, Bautista would be 40 and 41 and likely relegated to a DH role.

I don’t know if Jose Bautista can replicate the very same success David Ortiz has enjoyed in the twilight of his career, but it’s an incredibly big gamble for the Blue Jays to make.

The Jays took a risk back in 2011 when they signed Jose Bautista to a five-year contract with a club option, and luckily for both parties, that deal worked out very well. But the odds of yet another five-year Jose Bautista deal working out are incredibly slim.

Four years at $77 million dollars? Something like that seems very palatable. The Jays might have Jose Bautista in the field for two more seasons beyond 2016, and then in the final two years of the contract, he transitions into a fulltime DH. Now, it feels like that deal FanGraphs put together is much more of a pipe dream.

Considering that player option contracts were handed out like candy this past offseason, it wouldn’t surprise me if Jose Bautista included that provision in his contract as well.

If I’m the Blue Jays, I’ve walked away from negotiations with Jose Bautista. If he has a firm number he’s sticking with, the Jays should simply play out the season and if Bautista wants to pick up contract talks mid-season or at season’s end, so be it.

However, if Jose Bautista now walks as a free agent, I don’t think it’s the worst thing in the world anymore. Other teams have survived after watching players like Jose Bautista enjoy the most fruitful years of their careers, only to see them leave as a free agent shortly thereafter.

The example I keep coming back to is Albert Pujols’ situation with the St. Louis Cardinals. After 11 seasons in St. Louis, Pujols left as a free agent and signed a 10-year/$240 million dollar contract with the LA Angels.

The money the Cardinals would’ve allocated to a contract for Albert Pujols allowed them to do so many other things. The Cards might be a unique case because their farm system is renowned; they seemingly have an assembly line of position players ready when someone exits.

And now, that Albert Pujols contract which the Angels still have on the books has been deemed as the worst contract in all of baseball.

As the Blue Jays begin to prepare for life after Jose Bautista, here’s where you start wondering how they’re going to replace Joey Bats’ production.

If you look to the Blue Jays farm system right now, Anthony Alford is really the only player on the radar that may fill that gap. Unless someone like Troy Tulowitzki takes over and he has a monstrous offensive season, I don’t know how the Jays are going to match Jose Bautista’s production.

2017 is going to be a very different year for the Blue Jays anyway. They’re going to look completely different. With 8 players heading to free agency, Jose Bautista being one of them, the slugging Jays of 2015 and 2016 may not exist next year.

If the Blue Jays are going to be reevaluating and retooling next year anyway, maybe they don’t need Jose Bautista as much as he thinks they do.

At the very least, if Jose Bautista leaves as a free agent, the Blue Jays would receive draft pick compensation if he rejects a qualifying offer. That draft pick could potentially transform into the next Jose Bautista; one that would cost about $140 million dollars less.

Should the Blue Jays Re-Sign Bautista or Encarnacion? 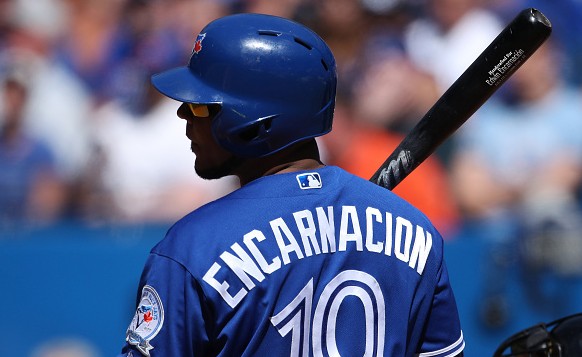 Edwin Encarnacion is Positioning Himself for a Big Payday

Toronto is Strangely the Best Landing Spot for Jose Bautista