3 Up 3 Down: One Run Losses, Aaron Sanchez and the Yankees

Who were those Toronto Blue Jays that played the Red Sox over the weekend?

A typically formidable bullpen and solid defensive core has helped propel the Blue Jays to a stellar second half … but not on Saturday and Sunday.

It was as if the Toronto Blue Jays of early 2015 came and took over the team once again. A combination of poor relief appearances at the most inopportune times and sloppy defense ultimately cost the Blue Jays a pair of wins.

Yes, the Jays are still 12-8 in their last 20 games and 6-4 in their last 10 games. But with a hard-charging New York Yankees squad and only two weeks remaining in the regular season, this is hardly the time for the Blue Jays to be giving away wins.

Those Pesky One Run Losses

Over the weekend, the Blue Jays suffered another pair of one-run losses; that now puts their record at 13-27. Factoring that in, it’s quite remarkable that the Blue Jays are “only” an 85 win team right now.

The Jays Pythagorean record currently sits at 94-55, and even with a few lucky bounces, they should’ve still parlayed at least a few of those losses into wins.

There’s definitely an element of luck in those one-run losses; nobody really has an answer as to why the Jays have lost so many close games this season. The bulk of them took place in the first half and that was when the bullpen was in constant flux.

For the most part, it seems like the bullpen has coughed up the lead late in the game, and often times the Blue Jays have at least made it close. Just like Saturday when they almost erased a three-run deficit and had the tying run in scoring position.

For the time being, I’ll cough it up to a lot of bad luck and some tricky hops in the first half of the season. But whenever games get close from here on out, it’s going to make things especially worrisome for Blue Jays fans.

What Happened to Aaron Sanchez?

Speaking of worrisome, what’s going on with Aaron Sanchez? As of late, he hasn’t been all that great out of the bullpen and has looked a little shaky pitching in high leverage situations.

Sanchez’ failure to retire a single batter on Saturday night (with two men out, mind you) is a little concerning; considering Aaron Sanchez has been John Gibbons’ go-to setup man since late July.

The other thing? Aaron Sanchez is not missing very many bats these days. He’s only struck out three batters in his past 11 appearances, meanwhile he’s walked five batters in those games.

Sanchez is a ground ball pitcher by trade, but when he isn’t getting swings and misses, that’s quite worrisome for a guy who’s typically coming into a game in the eighth inning and trying to hold a lead.

For the time being, I wonder if John Gibbons will slot Mark Lowe into the setup role instead of Aaron Sanchez. Lowe has been stellar for the Jays out of the bullpen with 12 strikeouts and only 1 walk in 19 games.

That’s precisely the type of pitcher you want in that game situation; somebody who typically doesn’t allow runners on base and can get that clutch strikeout. I’m not confident Aaron Sanchez is that guy right now, but Mark Lowe is.

Another Crucial Series Against the Yankees

The ongoing hyperbole is that this is the “biggest series of the season” for the Blue Jays, and in many ways this truly is. Toronto can either go a long way to putting the division on ice or they could allow the Yankees to gain game ground this week.

The odds certainly favour the Blue Jays in this series, though; the Yankees wrapped Sunday Night Baseball late last night, which means they probably didn’t get into Toronto until early this morning.

The Blue Jays also dodged a bullet by missing Masahiro Tanaka on Wednesday, and the Jays are sending their three best starting pitchers to the mound this series: David Price, Marco Estrada and Marcus Stroman.

Against all other AL East opponents, the Blue Jays have fared best against the Yankees with an 11-5 record thus far in 2015. A few extra wins in this final regular season series versus New York could go a long way to securing the division.

Ian Hunter
Ian has been writing about the Toronto Blue Jays since 2007. He enjoyed the tail-end of the Roy Halladay era and vividly remembers the Alex Rodriguez "mine" incident. He'll also retell the story of Game 5 of the 2015 ALDS to his kids for the next 20 years.
Tags : 3 Up 3 Down     Aaron Sanchez     New York Yankees 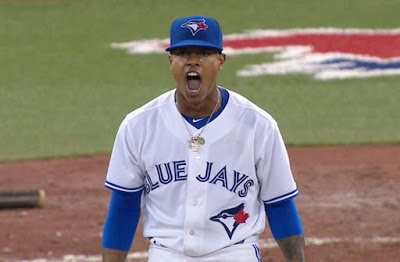 GIFS: Marcus Stroman is Pumped to Be Back in Toronto 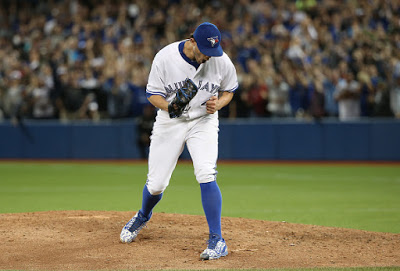