Would you believe me if I told you that Alex Anthopoulos has never signed a free agent starting pitcher to a Major League contract? It’s true. For whatever reason, AA seemingly has an aversion to inking starting pitchers to contracts.

Over the course of his four year tenure as General Manager for the Toronto Blue Jays, Alex Anthopoulos has never signed a free agent starting pitcher. In fact, it’s been nearly seven years. Think back to 2007 when Tomo Ohka inked a $1.5 million dollar contract.

There are still a few notable elite arms out on the market like Ubaldo Jimenez and Ervin Santana, but as the days and weeks pass, it’s increasingly unlikely the Blue Jays will sign a free agent pitcher at all.

Earlier this week, Alex Anthopoulos spoke with the Toronto Star’s Brendan Kennedy and shed some light on how the free agent landscape looks for the Blue Jays:

“As the prices in free agency sit today, I’m not optimistic. But that could change. We’re definitely having dialogue in trade. I wouldn’t say that we’re necessarily close, but we’re having active dialogue.”

Not surprisingly, Alex is leaning more towards trading for starting pitching rather than signing a free agent. And courtesy of his chat with Brendan Kennedy, we’ve now learned the reason why AA is leading towards trade is predominantly because of the price.

If someone like Nolasco can command an AAV of $12 million, then just imagine what Jimenez and Santana could fetch; probably somewhere in the neighbourhood of $16-$17 million a season and at least five or six guaranteed years.

So at that price, one can understand why Alex Anthopoulos would prefer to go the trade route. You may not necessarily agree that’s the way for the Blue Jays to go this offseason (I don’t), but at least there’s rationale behind it.

Is it a reluctance to overpay free agents to come to Toronto? Or is it a refusal to let the top remaining free agents set their own price?

Trading away players would obviously cost prospects or big league players, but from an outsider’s perspective, signing a free agent pitcher would be the easiest way to fix the starting rotation without giving up anything more than just cash.

It’s perplexing that a team with close to a $135 million dollar payroll for 2014 is suddenly pinching pennies when it comes to starting pitchers. They have no issue paying Mark Buehrle $18 million dollars a season, but are reluctant to sign someone like Ubaldo Jimenez for a similar amount.

The Blue Jays could likely find a starting pitcher through trade that comes at a reasonable salary, but they’d still be paying in the way of prospects. And these days, prospects are valued like the Holy Grail.

So whether it’s in the way of cash or prospects, the Blue Jays would be paying to upgrade their starting rotation … one way or another. The currency is the exact same.

Frankly, after Jimenez and Santana, the free agent starting pitchers aren’t all that intriguing anyway. There’s the middle-tier of Bartolo Colon and Matt Garza, but after those arms, the quality of starting pitchers drops off significantly.

So if the Blue Jays aren’t going to sign either Ubaldo or Santana or one of the remaining middle-tier starters, they may as well not even bother dipping into the free agent pool at all. The lower-tier starters are a dime a dozen, and internal candidates are a plenty.

Speaking of which, maybe one of the reasons why Anthopoulos has less of a sense of urgency to upgrade the starting rotation because some of the young prospects like Marcus Stroman and Aaron Sanchez are further along than originally predicted.

Anthopoulos also seems very confident that Brandon Morrow will be a mainstay in the rotation in 2014. He’s noted that Morrow is throwing at 100% with no discomfort, which certainly is encouraging news, but Opening Day is still four months away.

But this particular scenario is quantity over quality. It’s not like the Blue Jays have 14 dependable starting pitchers at their disposal; many of them are guys coming back from significant injuries, players without options, and relievers that may or may not transition into the starting rotation.

Is Alex Anthopoulos convinced a starting rotation comprised of R.A. Dickey, Mark Buehrle, Brandon Morrow, J.A. Happ, and maybe Marcus Stroman or Todd Redmond is championship worthy? I really have a tough time believing those guys will lead the Blue Jays back to the playoffs.

But then again, I’ve been wrong before … just think back to last year. Most people thought the Blue Jays had a championship calibre starting rotation, and it was anything but.

Instead of overpromise/underdeliver, perhaps this year’s motto for the starting rotation will be underpromise/overdeliver. And if they don’t end up signing any free agent pitchers, that adage will likely ring true for 2014.

Image courtesy of The Star

Ian Hunter
Ian has been writing about the Toronto Blue Jays since 2007. He enjoyed the tail-end of the Roy Halladay era and vividly remembers the Alex Rodriguez "mine" incident. He'll also retell the story of Game 5 of the 2015 ALDS to his kids for the next 20 years.
Tags : Alex Anthopoulos     Brandon Morrow     Ervin Santana     Free Agents     Marcus Stroman     starting pitchers     starting pitching     Ubaldo Jimenez 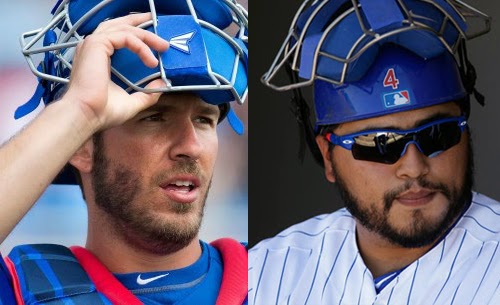 The Catcher Carousel: Arencibia’s Out, Navarro’s In