It was an exciting weekend for the Toronto Blue Jays both on and off the field, so here in no particular order are some musings from the weekend that was in Blue Jays baseball:

Roberto Alomar: Second to None

Watching the Baseball Hall of Fame Induction Ceremony yesterday, I truly understood how great of a baseball player Roberto Alomar was. I think Jamie Campbell and Gregg Zaun put it best when they said we may not see another Blue Jay in Cooperstown for a very long time.

It makes one wonder what might have happened had Alomar spent more than five seasons in Toronto. There’s no doubt he would have continued to shine, even if the team itself did not.

The more I think about it, the more I realize just how pivotal Roberto Alomar’s home run off Dennis Eckersley in the 1992 ALCS was. Up until that point, the Blue Jays had gained a reputation as the “Blow Jays”; always managing to find a way to choke down the stretch.

Alomar’s home run was the culmination of so many previous disappointments; the collapse in the 1985 ALCS, losing down the stretch to the Tigers in 1987, coming up short in the 1989 and 1991 ALCS; it all lead up to that moment in Oakland.

The difference between going into Game 5 in Oakland up 3-1 as opposed to 2-2 would prove to be huge. As the A’s held a 2-run lead with the best closer in the game in Dennis Eckersley ready to shut things down, the momentum was entirely on the Athletics side.

In my opinion, it was the biggest home run in the history of the franchise. Joe Carter’s in 1993 may have helped sealed a World Series title, but without Roberto Alomar’s home run in the 1992, the Blue Jays might not have ever gotten to the Fall Classic in the first place.

It was another disheartening loss by the Blue Jays on Saturday night, and something we’ve become all too accustomed with over the course of the season; the Blue Jays bullpen blowing a lead late in the game.

While the finger-pointing may have been directed towards Marc Rzepczynski, I think that it was pretty unwarranted. He had to deal with the heart of the Rangers order, and he was only charged with two earned runs, it’s not like he gave up a grand slam.

Also, the Rangers seemed to get a bit of help from the first base umpire as Brian Gorman determined Adam Lind came off the bag during the Mitch Moreland bunt, even though he was clearly still on the base. Had the call been right, there’s one out and a man on second base rather than two on and nobody out.

Corey Patterson’s dance routine in right field didn’t help the cause either, as he was twisting and turning trying to field that ball hit by Michael Young. He claims the ball wasn’t catchable, but perhaps if Patterson was positioned correctly in the first place, it would have never been a problem.

Brett Cecil back to his old self?

The complete game shutout against one of the most deadly offenses in the league was a very encouraging start for Brett Cecil, but I’m going to approach it with tempered enthusiasm.

Let’s keep in mind that Jo-Jo Reyes also had a complete game as well, and then he followed that up by giving up a combined 38 earned runs in his next 9 starts.

I don’t think we should expect Brett Cecil to shut out teams like he did with the Texas Rangers, but hopefully the results are a sign of things to come. Perhaps the most encouraging part of Cecil’s start was that he was still touching 94 MPH in the top of the ninth.

The velocity issue has been a concern for most of the season, and now with his sinker and fastball being thrown at 90+ MPH, that will hopefully increase the effectiveness of his offspeed pitches.

Ian Hunter
Ian has been writing about the Toronto Blue Jays since 2007. He enjoyed the tail-end of the Roy Halladay era and vividly remembers the Alex Rodriguez "mine" incident. He'll also retell the story of Game 5 of the 2015 ALDS to his kids for the next 20 years.
Tags : Baseball Hall of Fame     Brett Cecil     Corey Patterson     Marc Rzepczynski     Roberto Alomar 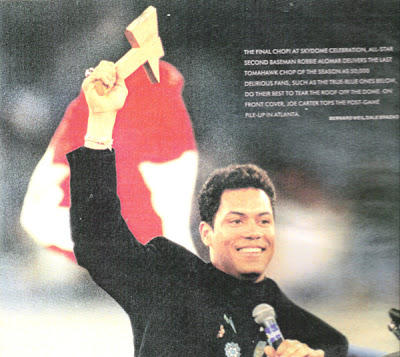