Is the Legacy of Joe Carter Overrated?

We remember him as “Touch ’em All Joe”. Phillies fans remember him as man who ruined their childhood. Either way, Joe Carter certainly left his legacy not only on the city of Toronto, but baseball in Canada as well.

My very first Blue Jays experience just so happened to be the game where the Blue Jays won the pennant on October 3rd, 1992. Joe Carter’s 34th home run of the season that game would ultimately be the game winner, and that moment solidified Carter as my baseball hero.

With the invention of sabermetrics and the popularity of advanced baseball statistics, it urged me to take a closer look at the legacy of Joe Carter. Unfortunately, it turns out he may not be as great as I remember.

The yardstick these days seems to be WAR or wins above replacement. When we stack up Joe Carter against other Blue Jay greats, he pales in comparison to the likes of  Roberto Alomar or Carlos Delgado.

This WAR Graph also takes into account the player’s career WAR totals before and after their tenures with the Blue Jays, but you can plainly see that Joe Carter isn’t even in the realm of Alomar or Delgado, but closer to the injury-shortened career of George Bell.

When it comes to offensive WAR, Carter doesn’t even rank in the top 10 by a Blue Jays player, not even in top 20. Joe Carter is 22nd all-time as a Blue Jay with 8.6 offensive WAR, sandwiched in between Eric Hinske at 21 and Otto Velez at 23.

That’s a very sobering thought for someone like myself who has long thought of Joe Carter as one of the greatest offensive players to don the Blue Jays uniform.

One of Joe Carter’s career hallmarks was that he was an RBI machine. While 10 straight 100 RBI seasons is nothing to scoff at, I think it says more about the lineups constructed around him rather than Carter himself. He greatly benefited from some stellar Blue Jays players who had no trouble whatsoever getting on base ahead of Carter.

Baseball Reference took a look at the list of the worst OPS+ in a 100 RBI season, and sure enough, there’s Joe Carter at the top of the list for his piddly 76 OPS+ in 1997. He’s actually on the list three times in Top 13, so congratulations Joe … I guess?

Joe Carter spent 15 seasons in the majors, but only once did he ever hit over .300: that was when he hit .302 in 1984 with the Cleveland Indians. During his years in Toronto with the Blue Jays, his batting average hovered around the .250 mark.

1992 was arguably one of Carter’s best years and he was rewarded handsomely by placing third in the American League MVP voting  that year. He amassed only 2.4 WAR that season, and yet Frank Thomas who was worth 7.6 WAR placed eighth.

If we go by wins above replacement alone, Joe Carter placed 18th on the list of the top 20 AL MVP candidates. And yet somehow, he received 201 votes that year. Why? Because of his reputation as a home run hitter and an RBI machine.

All this information was not available back in the early nineties, and all voters had to look at were the triple crown categories: batting average, home runs, and RBI’s. And when Joe Carter typically produced well in two out of those three categories, it was just assumed he was a great player.

Not only do advanced offensive statistics indicate Joe Carter’s flaws, but the defensive statistics as well. Whether you go by Baseball Reference’s defensive WAR or FanGraphs positional or fielding statistics, either way you slice it, Carter was not an exceptional fielder.

Don’t get me wrong, I’m not accusing Joe Carter of being a fraud or a shell of a baseball player. He managed to hit 20 home runs or more in all but 3 of his 15 seasons in the majors. Carter did that all on his own, and that’s a very impressive feat.

However, his reputation as an RBI machine is something that he did have a great deal of assistance with. Had Carter not been the benefit of having such incredible hitters in front of him in the lineup, I don’t think he would have nearly the amount of RBI’s that he does.

It pains me to question how great Joe Carter was because to me, he was a legend. The iconic image of him celebrating his walk-off home run will be ingrained in my mind forever. It’s only when I started to challenge his legacy that things became more clear.

Subtract the home run from the 1993 World Series and take away the game-winning catch from the 1992 World Series, and what legacy has Joe Carter left behind? Without those two career-defining plays, I honestly can’t conjure up very many lasting images of Joe Carter.

A player’s overall excellence should not be defined by one single play, but by the sum of great plays over their entire career. And if we use that basic formula to determine excellence, then I’m afraid Joe Carter just doesn’t measure up.

Nobody can ever take away Joe Carter’s home run off Mitch Williams to win the 1993 World Series. But say for a moment we did; I don’t think very many people would remember Joe Carter otherwise.

Ian Hunter
Ian has been writing about the Toronto Blue Jays since 2007. He enjoyed the tail-end of the Roy Halladay era and vividly remembers the Alex Rodriguez "mine" incident. He'll also retell the story of Game 5 of the 2015 ALDS to his kids for the next 20 years.
Tags : 1993 Toronto Blue Jays     1993 World Series     Joe Carter
Previous post

Welcome to the Show, Eric Thames 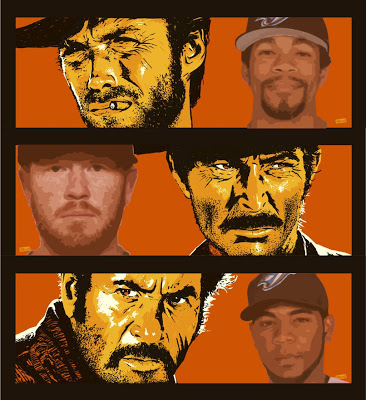 Thames, Litsch and Encarnacion: The Good ,The Bad and the Ugly