The sound of the beer vendors shouting up the aisles …
The smell of Lester’s Ballpark hot dogs at the concession stands …
The sight of more than 40,000 fans …

It can only mean one thing – the Blue Jays Home Opener.

After six long months of waiting, baseball has finally returned to the city of Toronto.

Each year, the Blue Jays Home Opener brings a sense of hope back to baseball fans. While this season in particular doesn’t exactly promise to be an extremely successful one on the field, that doesn’t mean this year’s Home Opener is any less special.

The Home Opener means different things to different people, and a few weeks ago I reached out to the Blue Jays blogosphere are some followers on Twitter about what the Hope Opener means to them.

Not surprisingly, for some folks the Home Opener revolves around alcohol. And there’s no doubt that it’s usually the biggest party in Toronto that day. Here’s what Stoeten from Drunk Jays Fans had to say about the Home Opener:

“To me the home opener has kind of become synonymous with amateur night at the Dome. It’s the one night all year that I know for sure my non-baseball friends will come out just to be there and have a giant party and get ridiculously drunk on insanely overpriced beer and whatever we can sneak in.”

Drew from Ghostrunner on First shares a similar regard towards the first game of the season on home soil:

“I’d like to say something poetic about hope springing eternal and the wonderment of a blank slate and being tied for first; but Opening Day is about getting drunk.

Opening Day — just like every other warm weather holiday — is more about Vitamin D-fueled excitement trampling over the meaning of the occasion, leaving an ugly trail of empty king cans in its wake. One giant party with baseball as the guest of honor. School is skipped, work is blown off, slurs are uttered, tops are removed.

The least significant game (in terms of the ultimate post-season goal) serves as the backdrop for an entire continent shaking off the winter rust and letting loose in the fresh spring air. What’s that? A roof? Abomination.”

On the other hand, Mat from Jays Journal took a more sentimental approach:

“The Home Opener is a day full of memories for families, fans, and friends. The stadiums are always packed, with some people taking time off from work and some kids skipping school, and each fan is equally optimistic about what the season holds.

It’s a great day because unlike the other professional sports, most people can afford to attend the games if they want to. The seats are plentiful and there are prices to meet everyone’s budget.

On Opening Day, you can be sure that no matter where your seat is, you’re likely to be surrounded by many fellow fans. That’s what makes it such a great day and the best first day of any sport.”

Dick from 1 Blue Jays Way speaks on how the fans themselves really make the Home Opener what it is:

“The Home Opener to me means that spring is here and summer is around the corner. I have been going every year except the year after J.P. let King Carlos walk. It was my own sort of silent protest.

The thing I love most about the opener is the fact that the Dome is always full, downtown is packed and the buzz that that environment creates. It takes me back to the days when the Jays packed it every night and finding a pair up in the fifth deck was tough.

The game itself is almost secondary, the feeling that it gives me to be there after a long, cold winter is what I crave.”

Here’s what the Blue Jays Home Opener means to Matthias from Mop Up Duty:

“I view opening day like the first day of a new job. Excitement and a little fear mixed together. But after a while the shine wears off and it’s time to put the hammer down and get the job done.”

Chris from Infield Fly talks about how there is a giant party atmosphere at the Home Opener, especially after waiting a week for the Blue Jays to come home:

“To me, the Home Opener is like New Year’s. When the Jays open on the road, it’s kind of like watching the fireworks in Australia on TV before celebrating for real.”

Mike from The Mike Statement shares some of his memories from past Home Openers:

“It reminds me of elementary school, sitting in the gym, with the game piped in over the PA system – when everyone loved the Jays, win or lose, and the SkyDome was filled every night.”

Here’s what my friend Shane had to say, who I dragged to last year’s Home Opener:

“It means 10 dollar beers and paper airplanes on the field.”

Thoughts on the Home Opener from Jeff at Sport Marketing Discussion:

“It means the largest gathering of Torontonians for one event in the year!”

Fans dream of the Home Opener as soon as the off season begins. Twitter user AlleyCat17 has been eagerly anticipating baseball coming back to Toronto:

“It’s a chance to forget about the cold winters and give us something to be excited about, its a hope for a prosperous season full of seeing young dreams come true, while 1000’s of people cheer them on. The opener gives me another chance to see Rios.”

Maybe best of all is from the eternal optimist and the self-proclaimed unabashed homer himself, Eyebleaf from Sports and the City. He manages to constantly instill belief in non-believers, and says it best with just a few words:

It doesn’t matter whether if you’re among the 40,000+ fans in the stands, or halfway across the country watching on TV, the Home Opener is the one game of the year where the fans really get a chance to shine.

This Home Opener in particular marks the beginning of a new beginning for this franchise … and in my mind, that’s something to celebrate.

Ian Hunter
Ian has been writing about the Toronto Blue Jays since 2007. He enjoyed the tail-end of the Roy Halladay era and vividly remembers the Alex Rodriguez "mine" incident. He'll also retell the story of Game 5 of the 2015 ALDS to his kids for the next 20 years.
Tags : 2010 Home Opener     Home Opener 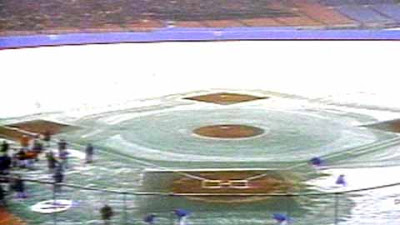