It took them seven tries and some assistance from mother nature, but the Toronto Blue Jays finally won a game at Fenway Park.

After seven innings and a hell of a downpour, the umpires chose to call it a game with the final score being 11-5. By glancing at the box score, you might think that the Blue Jays had a comfortable lead late in the game. By the time the initial rain delay began, the Red Sox had runners on third and second with nobody out and Casey Janssen ready to fall apart at the seams. Every once in a while, the Jays get a lucky break and that was certainly one of them.

Oddly enough, Scott Richmond’s last and first starts of the season ended the same way; in a rain delay. Except this time, Richmond was credited with the win for going six innings and giving up four earned runs rather than walking away with a no decision. With that victory, Richmond posted back to back victories for the first time since April, when he won the American League Rookie of the Month award. It’s been a roller coaster season for Richmond to say the least, but he still remains as one of the contenders for the fifth starting rotation job next year.

It’s hard to believe that tonight the Blue Jays will attempt to go for their first five game win streak of the season. We all remember quite fondly the ten game win streak that the Blue Jays blessed us with last year, so it would be nice to end this season on a high and keep the win-streak going while delaying the Red Sox from winning the Wild Card by just one more day.

Ian Hunter
Ian has been writing about the Toronto Blue Jays since 2007. He enjoyed the tail-end of the Roy Halladay era and vividly remembers the Alex Rodriguez "mine" incident. He'll also retell the story of Game 5 of the 2015 ALDS to his kids for the next 20 years.
Tags : Boston Red Sox     Casey Janssen     Fenway Park     Rainout     Scott Richmond 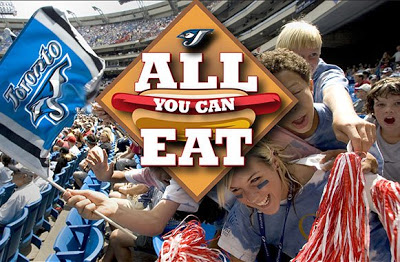 The All You Can Eat Aftermath

Shades of Spring in Fall