Highs and lows through the first 90 games

The 2009 season is just a little over half way finished and already I feel like I’ve experienced more highs and lows than one of those crackheads on Intervention. As demonstrated by the line graph above, it’s been a roller coaster first half thanks to an incredible first few months, to a nine game losing streak, to having rookies take up three out of the five starting rotation. So let’s take a trip down memory lane and relive everything that’s happened through the first 90 games of the season for the Toronto Blue Jays.
1.) April 6: In an electric Opening Day against the Tigers, the Blue Jays get it done by knocking around Justin Verlander in the first game of the season with an eventual 12-5 win. Adam Lind impresses with a career high six RBI’s and Travis Snider goes deep to start off his season with a bang.

2.) April 11: The Blue Jays end the first week of the 2009 season in first place. Scalpers outside of the Rogers Centre immediately begin selling playoff tickets even though the Jays have a 5-1 record with 156 games remaining in the season.

3.) April 16: The new offensive juggernaut in the American League continues its dominance as the Blue Jays continue to build on their early reputation as a power hitting team. After taking three out of four against the Minnesota Twins, the Jays lead most offensive categories including home runs and runs scored. It’s almost as if somebody took the 2008 Jays and flipped them completely upside down.

4.) April 23: Ricky Romero and B.J. Ryan wind up on the disabled list, but the Blue Jays move full speed ahead despite the injuries. It was expected to be a slugfest at the Rogers Centre against the heavy-hitting Texas Rangers, but the Blue Jays kept the Rangers at bay for the most part. The Jays continued their trend of winning either two or three games in a series by taking another set over the Texas Rangers.

5.) April 30: Although it wasn’t as glamorous as a ten game winning streak, the Jays strung together a streak of seven consecutive series wins to begin the 2009 season. That streak came to halt after losing two out of three in Kansas City, even though the bluebirds still held a 15-9 record to finish off the month of April.

6.) May 6: Going into the second month of the season, things could not be better for the Blue Jays. Despite losing Jesse Litsch and Ricky Romero to the DL, the Jays were still firing on all cylinders perched at the top of the American League East and Scott Richmond picked up an AL Rookie of the Month award to boot. Not bad for a team that many experts pegged as finishing fourth place or worse.

7.) May 12: It was the pitching matchup that Blue Jays fans had been praying for ever since A.J. Burnett decided to opt out of his contract with the Blue Jays and sign with the New York Yankees. With an atmosphere that rivaled the good old days of ’92-’93, the Rogers Centre came alive for Halladay vs. Burnett. Doc went the distance and picked up the complete game victory putting his former teammate to shame.

8.) May 18: A four game series at home against the Chicago White Sox was just what the doctor ordered to help the Blue Jays recover after losing two out of three from the New York Yankees. It was a coming out party for Blue Jays rookies as Brett Cecil, Robert Ray and Scott Richmond all impressed giving up three earned runs or less in all of their starts. At 13 games above .500, everyone was in disbelief at how well the Blue Jays were playing.

9.) May 21: After holding onto the reins in the AL East, the Blue Jays lose a crucial three game series at Fenway Park and also lose sight of first place. A tough start against Tim Wakefield really threw the Jays off their game early, and they couldn’t find their footing the rest of the series.

10.) May 24: The worst road trip in Blue Jays history continues as they kick off interleague play by losing three straight games to the Atlanta Braves. Even with the return of Casey Janssen and a solid start from Roy Halladay, the Jays couldn’t hold off the Braves.

11.) May 27: Dropping two more games to the Orioles at Camden Yards had the Blue Jays thirsty for a win since they had lost the previous eight games. A start from good old dependable Roy Halladay would be the cure, right? Wrong. Even after some late inning heroics from Aaron Hill couldn’t save the Blue Jays from a bullpen implosion and the streak continued at nine straight losses.

12.) May 30: The losing streak comes full circle as it ends against the pitcher which it began; Tim Wakefield. The Blue Jays took it to the Sawx and won two out of three at home. Turns out the Jays and Red Sox would beat up on each other as the New York Yankees took over first place in the division.

14.) June 14: The Blue Jays enjoy interleague play about as much as Kevin Millar enjoys waxing his back. Their struggles continue against National League teams and the Blue Jays get swept at home against the Florida Marlins. But the most disturbing news from this series surrounds Roy Halladay; he exits early from a game and heads to the disabled list.

15.) June 18: For whatever reason, the Philadelphia Phillies had an atrocious record at home in Citizen’s Bank Park and that trend played in favour of the Toronto Blue Jays. In a couple of wild wins, the Blue Jays manage to sweep the defending World Champions in their own house. Bad news comes in the way of Casey Janssen and new closer Scott Downs going on the DL.

16.) June 24: Another interleague series, and another couple of wins for the Jays. Brian Tallet has his best start of the year against the Cincinnati Reds and continues to impress since he was thrust into the starter’s role once Jesse Litsch was sent to the disabled list.

17.) July 5: Going into Yankee Stadium, expectations in this series were as high as the home run totals. In a key four game series, the Blue Jays went down swinging losing three out of four. Luckily, Ricky Romero managed to salvage at least one win for the bluebirds. Romero’s rookie campaign proved to be the right decision for Brad Arnsberg and Cito Gaston. Also, Roy Halladay and Aaron Hill are rewarded with spots on the American League All-Star roster after putting up incredible numbers in the first half.

18.) July 9: In the midst of a crazy series in Tampa Bay, not only did the Blue Jays have to dodge trade talk surrounding Roy Halladay, but they also cut ties with their former closer B.J. Ryan. A couple of walk-off losses combined with all that negative press could have affected the Blue Jays and they were swept by the Rays at the Trop.

19.) July 12: The Blue Jays wrap up the first half of the season with a lackluster 4-2 loss to the only team below them in the American League East, the Baltimore Orioles. Finishing with a 44-46 record at the All-Star break puts them on par with where people expected them to be at the beginning of the season.

At the end of these 90 games, the Toronto Blue Jays are pretty much where everyone expected them to be; fourth place. The difficulty is that they performed so well in April and May that it skyrocketed expectations so high that there was almost no way that the Jays could keep it up. A lot of lessons have been learned in the first half; maybe the most important of all is that the Toronto Blue Jays do in fact have what it takes to be a first place team. Now the hard part is finding out how to get back there.

Ian Hunter
Ian has been writing about the Toronto Blue Jays since 2007. He enjoyed the tail-end of the Roy Halladay era and vividly remembers the Alex Rodriguez "mine" incident. He'll also retell the story of Game 5 of the 2015 ALDS to his kids for the next 20 years.
Tags : Aaron Hill     Adam Lind     Brian Tallet     first half review     Ricky Romero     Roy Halladay     Scott Richmond     Scott Rolen

First half for Jays more empty than full 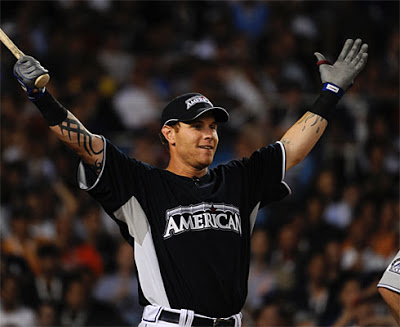