After a day filled with so much bad news in Blue Jay land, it was nice to finally receive some good news. The Jays really needed a strong outing from Scott Richmond and they received all that and more. Richmond had the best start of his career going 8 strong innings, striking out 11 Phillies along the way and giving up just one single earned run.

Despite Scott Richmond’s less than impressive career splits versus lefties, he succeeded in shutting down the lefty-heavy heart of the Philadelphia Phillies lineup. Not only that, but Scotty managed to do that in less than ideal conditions with the rain pouring down at Citizens Park. I find that pretty impressive considering that earlier today, I did everything in my power to avoid having to run a mere 20 feet in the rain from the back door to my car.

After winning his first four decisions of the season, Richmond has been held out of the win column since his last victory on May 3rd. Although he was being labelled as a fifth starter, he has the potential to be a solid middle of the rotation starting pitcher for the Blue Jays. Now with the injuries to Halladay and Janssen, it will nice to see Richmond back on a more regular basis.

Let me tell ya, six weeks is a long time to go without a glass of Scott Richmond Kool-Aid but it was certainly worth the wait.

Ian Hunter
Ian has been writing about the Toronto Blue Jays since 2007. He enjoyed the tail-end of the Roy Halladay era and vividly remembers the Alex Rodriguez "mine" incident. He'll also retell the story of Game 5 of the 2015 ALDS to his kids for the next 20 years.
Tags : Kool-aid     Scott Richmond 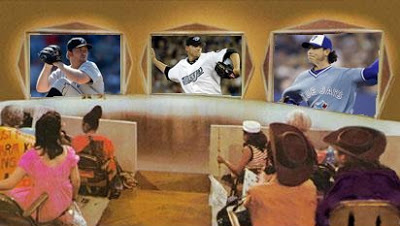