Beneath all the drama that was A.J. Burnett returning to Toronto along with the media circus that accompanies Alex Rodriguez, there was a smaller story at hand for the Blue Jays. Just in time for their extendo 4-game series with the Chicago White Sox, the Blue Jays $10 million dollar man has returned to the bullpen.

Except this time, B.J. Ryan will not be returning to his coveted closer role. For the time being, that place is being occupied by lefty reliever Scott Downs. But you can tell that Downs doesn’t want to ruffle any feathers, as he took time for a rare interview with the media and talked to Blue Jays beat reporter Jordan Bastian:

“In my eyes, he’s still our closer,” Downs said of Ryan. “I’m just filling in until he’s ready to go.”

Obviously, Scott Downs has been put in an awkward position. He wants to perform to the best of his ability and close games whenever he’s called upon, but at the same time he doesn’t want to be the guy to usurp B.J. Ryan. It’s like if someone from the office left on a maternity leave and their replacement performed better than the person who went to mat leave. It makes for a bit of an uncomfortable working environment.

So where does the $10 million dollar man fit it on the Blue Jays bullpen? For the time being, I think Cito Gaston will slowly ease him back into high-pressure situations and Ryan will probably slot somewhere in between Shawn Camp and Jesse Carlson. After all, the Blue Jays are paying B.J. Ryan $10 million dollars to be their closer, so I think he should be given a fair shot to regain his job. For the time being, Scott Downs is the man who will be called upon when there is a lead of 3 runs or less in late innings.

Ian Hunter
Ian has been writing about the Toronto Blue Jays since 2007. He enjoyed the tail-end of the Roy Halladay era and vividly remembers the Alex Rodriguez "mine" incident. He'll also retell the story of Game 5 of the 2015 ALDS to his kids for the next 20 years.
Tags : B.J. Ryan     closers     Scott Downs 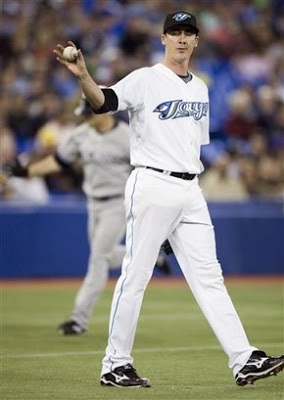 I’m a sucker for Giveaway Days