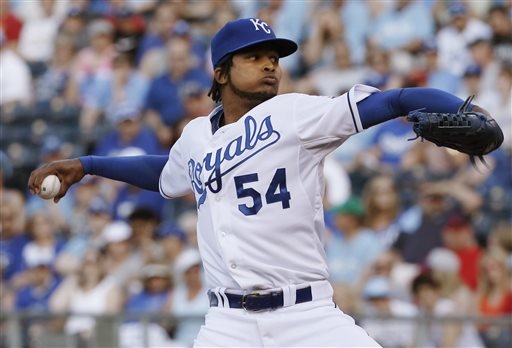 And then there was one.

After months of being linked to the Toronto Blue Jays, Ubaldo Jimenez is off the board. His name can officially be scratched off the board of potential starting pitcher upgrades, and the only man left is Ervin Santana.

MLB Trade Rumors has reported Ubaldo’s deal with the Baltimore Orioles is four years long and worth $50 million dollars total. However, the focus seems to be that the Blue Jays weren’t in on this deal.

Just add that to the long list of players Toronto should have been in on, but for one reason or another, they weren’t: Doug Fister, Brett Anderson, Masahiro Tanaka, Omar Infante, Matt Garza, and now Ubaldo Jimenez.

It’s sad, but this offseason has been more about what the Toronto Blue Jays haven’t done rather than what they have.

The funny thing is Ubaldo Jimenez and Ervin Santana have been touted as the answer to all the Blue Jays problems. But the reality is these are two pitchers who are dependable for innings, but beyond that it’s very questionable.

Ubaldo Jimenez himself has been somewhat of an enigma; piece together his first half from 2012 and second half from 2013
and you’ve easily got a Cy Young-worthy season. But unfortunately you just can’t cherry pick the best portions of a season and forget the rest.

For most of his career, Ervin Santana has predominantly been a number four or number five starter, and last year he elevated to a number three in Kansas city. And yet he was also being heralded as the obvious answer for the Blue Jays.

In that respect, why would the Blue Jays go out and sign a number three or four starter when they already have a plethora of them already in the system? Jimenez or Santana would essentially be an insurance policy for the Blue Jays back end of the rotation.

Ubaldo Jimenez’ contract with the Orioles seems like a good value. An average annual value of $12.5 million dollars is pretty reasonable, considering he turned down a $14 million dollar qualifying offer in November.

That’s the kind of contract the Blue Jays certainly could have matched. But all indications point towards the front office remaining firm on any potential offers to Ubaldo Jimenez and Ervin Santana.

My estimation is that guaranteed fourth year was likely a sticking point for the Blue Jays. Four years is a long time for somebody like Ubaldo Jimenez who is entering his age 30 season. There is certainly a fear they’d be paying a premium for his second half success in 2013.

Not only did the Orioles feel comfortable going four years on Jimenez, they were also willing to surrender their first round draft pick (17th overall) in the process.

Judging by the Ubaldo Jimenez signing coupled with the Suk min-Yoon signing, it appears as though the Orioles have a much greater sense of urgency to solidify their starting pitching than the Toronto Blue Jays.

$12.5 million is a reasonable amount to pay for a starting pitcher, considering the Blue Jays were perfectly fine giving Josh Johnson close to $14 million dollars last year to start 16 games.

So does Ubaldo Jimenez’ deal with the Orioles invariably drive up the asking price for Ervin Santana? Not the price per sae, but the duration; it all but guarantees that Santana will target a four-year deal, much like Matt Garza and Ubaldo Jimenez.

If the Blue Jays aren’t willing to go beyond their rumoured three-year maximum, then surely another team like the Seattle Mariners or the Los Angeles Angels will swoop in and give Ervin Santana a guaranteed fourth year.

Of the two starting pitchers, Ubaldo Jimenez and Ervin Santana, personally I would have preferred the Blue Jays went after Jimenez. The changed he’s made indicate that he’s turned the corner, and Ubaldo certainly has been durable dating back to 2009.

Santana is much more prone to the long ball, and pitching in a home run friendly park like the Rogers Centre doesn’t play to Santana’s strengths. But at this point, Ervin Santana is the only other external pitching option out there for the Blue Jays.

However, I don’t Ubaldo Jimenez signing with the Orioles dictates that the Blue Jays necessarily need to sign Ervin Santana. They obviously feel confident about their depth, but that just may be posturing on the part of the front office.

If the Blue Jays played to the media like they were desperate for starting pitching, agents would exploit that to no end. Not only that, but other teams would bid up the Blue Jays free agent targets as well.

At this point, I’ve come to accept that the Blue Jays likely won’t make any significant additions before Opening Day. It makes sense for them to sign Ervin Santana, but they clearly are not willing to deviate from their offer to Santana … if there even is an offer.

How to stop an 8 game losing streak

2 thoughts on “With Ubaldo off the Board, the Focus Shifts to Santana”