Betting $65 Million on Jose Bautista Could Pay Off

Jose Bautista has about 65 million reasons to be grinning ear to ear right now.

Earlier this week, I solicited the Blue Jays to pay Jose Bautista, and they did … big time; to the tune of five years and $65 million dollars, with a club option for a sixth year which could ultimately reach $79 million dollars.

On paper at this moment, I’ll admit this contract scares me a little bit. There is a chance it could all blow up in the face of Alex Anthopoulos and the Blue Jays, but the only way to find out whether or not it could work is to try.

As much as this decision smells of upper management, I won’t pawn off the onus onto the front office for making the final decision on this one. I’m willing to give Anthopoulos the benefit of the doubt here. He believes in Jose Bautista the player, and the person … and we should too.

It’s easy to get hung up over the dollar amount because $65 million dollars is a lot of money. No matter if you’re the Toronto Blue Jays, Boston Red Sox, or even the New York Yankees. At the end of the day though, it’s just money.

Money can be spent frivolously or it can be used very wisely, but in the end it’s just cash. Considering which media conglomerate owns this team, you know there will always be more cash in the piggy bank if needed.

It’s great the organization managed to save the $59 million remaining on Alex Rios’ contract and the $86 million remaining on the Vernon Wells contract, but do you think they were just saving it all for a rainy day? This spending shows the Blue Jays are ready to compete and they aren’t afraid to fork out the cash to do it.

Within the last 18 months, the Blue Jays have traded away key players like Alex Rios, Roy Halladay, Shaun Marcum and Vernon Wells. Although those kind of moves signal a rebuild is in the process, what kind of message does that send to the fans?

More importantly, what kind of message does that send to players being brought up through the minor league system, or even prospective free agents? That if you’re loyal to the organization, work hard and perform well that you’ll be cast aside?

I suspect Alex Anthopoulos is well aware of that reputation, and the Jose Bautista contract is an attempt to repair that image turn the page to begin in new era. In order to make Toronto an attractive place to play for certain players, this organization has to prove they are willing to pay top dollar for top talent.

Honestly speaking as a fan, all I really care about is building a winner, and this is the first big step towards that. The gesture alone of the Jose Bautista contract speaks volumes about where the Blue Jays priorities lie.

These fans are hungry for a winner. The city of Toronto is yearning to see a team back in the playoffs. Obviously, the Blue Jays believe that window of opportunity is the present, and Bautista’s contract is evidence of that.

Forget about all the statistics and all the tangibles for a moment and let’s look at the bigger picture. Forget what the projections are for 2011 and beyond. This contract is a means to an end. And if the Blue Jays win a World Series (or even make the playoffs), then in the end it will all be worth it.

Many of you probably think Jose Bautista becomes grossly overpaid and there’s no way he could ever possibly live up to the expectations that come with this dollar amount. Well, that’s the inherent risk you take when you sign any player to a long-term contract.

Albert Pujols has been a stud his entire career, but who’s to say he doesn’t fall off the map once he signs his next big contract? These are all possibilities as nothing is ever for certain in the game of baseball.

We can all argue ad nauseam as to whether the Blue Jays made a smart move here, but let’s not be so quick to judge the contract before Jose Bautista has even played a single game under his new deal. Talk to me in five years and then let’s look back and discuss whether or not it was a good deal.

There’s no question they’re taking a big gamble by signing Jose Bautista to a five year/$65 million dollar contract, but sometimes you have to bet big to win big. Nobody said the road to glory was going to be easy, and nobody said it was going to be cheap either.

The Blue Jays have proven they want to go to bat with Jose Bautista, and they’re willing to bet $65 million on number 19 to prove it. Now, only time will tell if it will pay off.

Ian Hunter
Ian has been writing about the Toronto Blue Jays since 2007. He enjoyed the tail-end of the Roy Halladay era and vividly remembers the Alex Rodriguez "mine" incident. He'll also retell the story of Game 5 of the 2015 ALDS to his kids for the next 20 years.
Tags : Alex Anthopoulos     contract extension     Jose Bautista 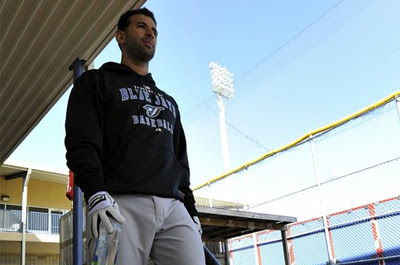